The planet Saturn is more than just a planet with a ring system. It is a significant part of our solar system.

Of all the planets, Saturn is to many the most beautiful. It has a mysterious uniqueness among the planets, but is it really that different? At first glance one might say yes, but just look deeper and maybe not.

Saturn is the sixth planet from the sun, and is visible without using a telescope, but its features do require magnification to be observed. It is second in size of the known planets. But the thing that attracts so much attention is its ring system.

The Composition of Saturn

Saturn is considered one of the gas giants.  It is primarily composed of light gases, most of which is hydrogen.  This allows a complex weather system, despite the fact Saturn is so far from the sun with little incoming heat.  One reason is Saturn rotates on its axis so fast.  And, that rotation is differential rotation.

So, what is the Coriolis effect?  Air must go around the planet in a day. It has farther to go near the equator in a given time.  This results in the planet outrunning air moving towards the equator and being outrun by air moving towards a pole, since the east-west air flow is matched to the speed the planet is moving at the latitude.  Saturn’s size and speed of rotation make this a Coriolis effect that is much greater on Saturn than on Earth, and is the effect that has much to do with our weather.

The result of Saturn’s atmospheric movements is it, like Jupiter, has alternating bands of wind direction as one moves from pole to pole.

Deep inside Saturn is probably, due to pressure and temperature, liquid hydrogen, solid hydrogen, then a rocky core possibly as large as the Earth.  The liquid hydrogen moves electrons captured from the sun over billions of years which causes Saturn to maintain a strong magnetic field.

The Shape of Saturn

Saturn has a roughly spherical shape, but the planet is flattened noticeably.  Because of its rapid rotation on its axis Saturn has a noticeable bulge at its equator, and its true shape is called an oblique spheroid.  Because of its rapid rotation gas near the planet’s equator moves upward until gravity can balance its upward movement.  In simple terms, Saturn acts like a centrifuge flinging gas outward until it is balanced by a force, gravity.

Kepler found three laws that are still used to discuss orbits.  One of them says more than this brief statement, but for our purposes it can be summarized that for a given height above an object a stable circular orbit requires the orbiting object to move at a given speed, and the center of the planet must be in the plane of the orbit.  Notice the mass of the orbiting object is not mentioned.  So, any object, whether it is tons or microscopic will orbit in the same way, provided the particles are at the needed speed and moving perpendicular to the lines from them to the center of the planet.  In short, as they fall towards the planet they are moving exactly the right speed to “fall” to the same distance above the planet, or as they try to escape by moving they fall back  so their distance to the planet remains the same.

So, the rings are many small particles of various size that orbit in unison.

When minor speed differences cause a particle to fall, or collide with others and disrupt their orbits, well placed moons can exert a gravitational nudge to keep them organized.  These moons are called shepherd moons because they can bring particles back to the speed and direction of the ring.  They will not shepherd every particle, but do affect enough particles to help preserve the rings.

Shepherd moons do have gravity, so they can clear gaps between the rings.  The rings do not act as a continuous large ring.

blackspanielgallery, Note: Image is in public domain made available by NASA.

Rings Are More Common than Meets the Eye

All four gas giants have ring systems, but the others are less spectacular than Saturn’s rings.

Enceladus gives a clue as to what is causing one of Saturn’s rings.  Enceladus has geysers that eject water ice, like snowflakes, towards one of the rings.  This ice feeds the ring and replenishes ice that is lost.

Saturn has many moons, and they are best described as being of a large variety.  Io has active volcanos.  Europa has what appears to be a large amount of water ice, and possibly has liquid water deep under the surface.  Others show impact craters.  Titan has an extended atmosphere, and liquid methane on its surface.  Then there are two moons that swap orbits, and this results in a twisting ring.

This article contains links to affiliate programs and Adsense advertising.  These must use cookies to allow for proper crediting. As a Viglink Associate, Zazzle Associate, and Amazon Associate I earn from qualifying purchases.

The Zazzle product images use art from public domain made available by NASA, and the introduction image is one of these products.

The rings are its distinguishing feature, yet scientists debate how long they will last before disappearing.

I have to say that Saturn is one of the most glamourous planets our Solar system can boast of. With its gorgeous rings, it is feast to eyes. The art posters you have displayed show how beautiful a planet can be even if it is devoid of life.

Air on any planet travels with the ground under it, or the gaseous surface. By day I mean in this article a Saturnian day. Air at the equator on Earth has about 40,ooo km to travel in a day by just remaining over the same spot, and at the poles it really does not have to go anywhere. It moves with the planet. So, it has a greater east-west component near the equator, the motion of the Earth itself. Saturn is larger and has a shorter day than Earth, so it has a greater Coriolis effect.

Why does air have to go around Saturn in one day? Is that true of the Coriolis effect on all exo- and solar system-planets?
Is it possible that you'll be writing similarly about the other gas giants?
Beautiful Saturn was known to the Babylonians as the white planet. 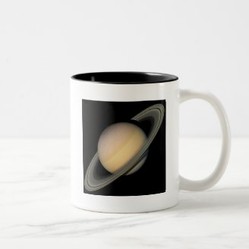 The universe got created according to the principles of Big Bang theory. Like anything else it will die in the end and get born again.
24%  1   3 SteveRogerson
Astronomy