Jack Horner was Real, the pie was real and he really did pull out a big plum ....with a twist!

Little Jack Horner sat in the corner
Eating his Christmas pie,
He put in his thumb and pulled out a plum
And said "What a good boy am I!"

Unlike the majority of nursery rhymes, Little Jack Horner really did exist and he really did 'Pull out a plum' – as to whether he was a good boy, well, that is open to interpretation.

King Henry VIII had fallen out with the Catholic Church

and was removing their property off of his land

Let's go back to a time when King Henry VIII was sending his men to demolish all monasteries in England after he had broken away from the Catholic Church.

Thomas Cromwell was tasked with this major act, not only to pull down all these religious establishments but to plunder their chattels and deliver all the gold and silver to Henry VIII, the Catholic Church being a rich and powerful organization had plenty to plunder including vast amounts of land.

Glastonbury, now famous for rock concerts and festivals was the largest and wealthiest Abbey in England.

Who was Little Jack Horner?

Enter, Jack Horner he was employed as a Steward to The Bishop of Glastonbury (Richard Whiting 1461 – 1539) of Glastonbury, a Benedictine Monastery. His job was pretty much an executive position, few would be trusted as Jack Horner was to manage the household, administer the accounts and collect taxes from tenants, peasants and others connected within the manor of Glastonbury.

Glastonbury had escaped King Henry VIII's seizure and knowing the estate was the last religious property left in Somerset, he accepted that he needed to act fast as it was only a matter of time before he would lose the Abbey and suffer destruction and looting.

There was hope for Glastobury because Henry VIII didn't mind a bribe or two so the Bishop decided that he would take advantage of the shady side of the Henry.

He confided in Jack Horner and tasked him with taking a gift to the king, it was a very large pie, but secreted in the pie were twelve title deeds to an assortment of English manorial estates owned by the Bishop.

Why use a pie?

Highway robbery was common and people had to be very creative in hiding their valuables to thwart robbers. I would question whether a big delicious looking pie would really escape the starving criminals!

Jack Horner did not believe for one second that King Henry would accept twelve deeds relating to small properties against the entire Abbey and all that land, he might have even feared for his own safety too.

Jack Horner had a better idea!

He had a better idea, simply steal the deeds of the manor of Mells, because it was prime land and considered to be the real 'plum' of the twelve manors.

Jack Horner was right and the bribe was rejected by Henry, but to protect himself he basically handed over The Bishop who was consequently arrested and convicted of treason, the charge was that he acted against the crown by remaining loyal to Rome.

Another twist to the tale is that Little Jack Horner himself was appointed as one of the 'twelve good men and true' to sit on the jury. Bishop Whiting was found guilty and sentanced to death, by being hung, drawn and quartered on Glastonbury Tor.

Horner kept his deeds, so legally owning the property and he moved into the Manor of Mells.

King Henry continued with his campaign and sent his men to destroy the Abbey.

did he put in his thumb and pull out a plumb?

I always wondered why Little Jack Horner had to sit in the corner :)

Wow interesting - brings a whole new 'feel' to the story - I'll be reading it to my Grand Son in a year or two - be nice to actually tell him the real story behind the nursery rhyme!

Such a beautiful poem, evoking pretty images of a bright colorful garden. Sad...

They Engulf Your Heart!! I never expected to feel like that again and had res...

Such a beautiful poem, evoking pretty images of a bright colorful garden. Sadly the true story behind Mary, Mary Quite Contrary is horrific.
100%  21   13 SidewalkPhilosopher
Other Baby Topics 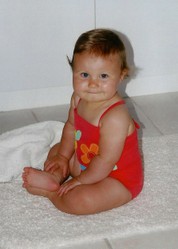 They Engulf Your Heart!! I never expected to feel like that again and had resigned myself to that fact years ago. And then my baby had a baby…Oh, my!!
Loading ...
Error!