The Rings of Power: initial thoughts

You are either a Tolkien fan or you are not, and there does not seem to be any middle ground. I am a Tolkien lover and so looked forward to Amazon's Middle Earth serial. I watched alone, as my wife is not a Tolkien reader, so I sat down to watch the first two episodes. As always fans of an author view television adaptations with a little trepidation, as adapters sometimes play fast and loose with the characters and storyline.But I was not disappointed and so thoroughly enjoyed my viewing session.

Familiarity with The Lord of the Rings nowadays involves exposure to not only the books, but also the film and television adaptation. Such was the filming success of Peter Jackson's trilogy that readers have come to visualise Tolkien's Middle Earth in terms of Jackson's New Zealand landscape, and his visualisation of elven, dwarvish and human locations in the story was true to the vision that Tolkien gave us the books. Amazon's television version wisely avoids the temptation to be overly original in its vision, so viewers who have felt happy with previous films of the trilogy are not likely to be disappointed with the vision presented to them by Amazon.Elven sites still have the fantasy character that they have in Tolkien's work and in the films. This is a positive point.

The new characters introduced into the film are the Harfoots, the ancestors of the Hobbits. These are presented well with no exaggerated characterisation. It is not widely known that Tolkien described both Hobbits and Harfoots as brown-skinned, and the producers have taken the opportunity to reflect this in the casting, in which there is a significant and   welcome complement of black actors cast in these roles. Significantly there is also a black  actor cast as an elf,  a class of beings traditionally visualised as fair skinned, The actor plays  his role very well and we must regard the casting as successful.

Tolkien was a phonologist, so any  casting of Tolkien's characters should take accents into consideration. Traditionally Hobbits have been seen as western English country folk and so have been given a south-western accent.It is here that the casters make a change in that they give the Harfoots an Irish accent. Fake Irish accents are all too common, but these are genuine. There is continuity between the films and the Rings of Power in the fact that both present the dwarfs with Scottish accents.

Consistency with the films in the visual images of orcs is present, and this is appealing to viewers, who have become used to a certain visual image of these creatures. But scenes containing orcs are not overplayed,and the orcs are a lurking menace, but not ever-present. Thus the Rings of Power does not make the mistake that was made  in the Hobbit part two, much of which was taken up by a fight not present in the book, which turned the film into an action movie, quite out of kilter with Tolkien's narrative.

One credible feature is that the Harfoots have a material culture simpler than the hobbits, who dwelt later in time. The Harfoots have a culture which is closer to that of Saxon peasants, whereas the hobbits are culturally reminiscent of late pre-industrial England. This is a credible element in the text, as it spares us from the anachronism of an interposition of what seems to be a relatively modern culture into a non-modern, imaginary period.

One criticism levelled at Tolkien is the paucity of strong female characters in his works.This is unfair,as Tolkien's writings are about male combat fellowship based on his war experiences,a situation in which women are not well represented. But furthermore, when Tolkien introduces a female character she is definitely not a weakling. One of Tolkien's strong female characters is Galadriel. She has a role in the Lord of the Rings and is given a major role in the Rings of Power, with much new material wriitten for her character. Yet Galadrel is not a plaster saint, for her character in the Rings of Power is presented as determined to the point of obsession to fight Sauron, though she is eventually proven right. A flawed Galadriel is hinted by Tolkien, as in the Silmarillion she is included in the Noldor, who were collectively guilty of the kinslaying of Aqualonde, though she was not ascribed any individual guilt.

The first two episodes  present few characters in the books. One of these is Gandalph, and the Rings of Power takes one of Tolkien's underdeveloped points and makes it into a larger part of the storyline. Tolkien says that the five wizards had to relearn much when they left Valinor for Middle Earth,and we see in the Rings of Power an early Gandalph, a good spirit sent from Valinor in embodied form, struggling to cope with embodiment.He does not disclose his name at this point, but his identity is clear to Tolkien readers. Certain other characters are introduced, but not too many. Elrond,the elf lord, seems set to play a major part in the story and Durin, the dwarf lord, provides some comic relief in the amusing interaction between him and his wife. But new characters enter the story, but again there are not too many of them.  The script is therefore professionally designed and well-written.

The basic plot of the Middle Earth story is sustained, indeed it could be hardly anything else,  as it centres on  the eternal conflict between good and evil, and in this account of this age-old struggle Tolkien's masterpiece is unerringly on the side of righteousness. But what we are seeing is an episode in this eternal struggle. We are not seeing any of Tolkien's mythical accounts narrated in the Silmarillion, though later episodes may touch on some of the story told therein. .

Tolkien purists may take umbrage at the inevitable creative licence that the scriptwriter has necessarily taken with  the  story, but we must remember that the story narrated in the Rings of Power is based on Tolkien's appendices to his magnum opus, and these asides represent the fragments of a much wider mythological vision. Would Tolkien have objected if a writer took his vision and used it to develop an aspect of Middle Earth's mythology? I doubt  it. Tolkien's Middle Earth writings were intended to form the basis of a mythology of the English people.It was never intended to be the exclusive possession of Tolkien. He did not claim to be the exclusive possesssor of the English-speaking mythopoeic imagination.

This was an enjoyable programme and I do not hesitate to commend it to readers.

I'm not a big scifi buff, but I watched it and enjoyed it. Don't know if I'll watch every episode, but overall, it was entertaining.

Tolkien's notes are so profuse that it is impossible to answer your question.Sorry.

Sometimes authors leave notes about works that are not completed -- such as, for example, Jack London about his Assassination Bureau -- or about works whose characters and plots invite prequels and sequels.

Would Tolkien happen to have done so in such a way that one might guess as to his reaction to Rings of Power?

Reading your article inspires me to watch 'The Rings of Power'. In India, we are lucky to get to see these serials based on what Amazon & Netflix choose. I also have to catch up with Middle-Earth, I will surely not miss a chance if I can find them on youtube or other sites. 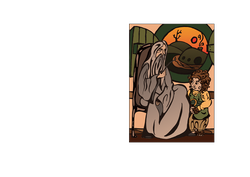