The Science of Interstellar by Kip Thorne: Book Review

The Science of Interstellar by Kip Thorne details educated guesses, speculations, and truths for anomalies, black and worm holes, blights, and slingshots.

Among stars are proofs to the universe's SOPs

The Science of Interstellar acquaints film-going book-readers with educated guesses, speculations, and truths to account for black and worm holes, crop blights, and gravitational anomalies and slingshots in the 2014-released science fiction movie, Interstellar. It thereby brings to movie-lover attention the two concepts that guide the film:
• Action, characters, and dialogue advance solidly established knowledge of space and laws of physics; and
• Speculations about physics and space call upon the ideas of respected scientists.

It therefore commences with:
• one-page foreword by film director Christopher Nolan;
• two-page preface; and
• 14-page presentation on Interstellar’s odyssey, from conceptualization in October 2005 to release in October 2014.

The Science of Interstellar then divides into 31 chapters grouped under seven thematic parts.

Humans are thought to be able to live only in 4 dimensions:

Artist concept of Gravity Probe B orbiting the Earth to measure space-time, a four-dimensional description of the universe including height, width, length, and time.

Part One elaborates laws which consider:

It functions as introduction to and review of:

Parts Two, Five, and Seven handle travel near and within black holes. Black holes inhabit galactic centers. They jam all matter from their respectively burned-out, dead, imploded, massive, nuclear fuel-spent, spinning stars into warped space-times. They thereby keep everything hidden at their singularities (centers), orbiting at their circumferences (uppers), and timeless at their horizons (surfaces).

Parts Three, Four, and Six link Earth and Gargantua through:

In "Interstellar" neighborhood of gas giant Saturn, with the most complex and largest ring system in the Solar System, is favored for colonies on Edmunds’, Mann’s, and Miller’s exoplanets and stations.

Mosaic of 75 exposures of Saturn taken over 8 hour timespan from a distance of approximately 847,000 kilometers (526,000 miles) by Cassini-Huygens unmanned spacecraft on August 12, 2009, beginning about 1.25 days after Saturn's equinox.

So The Science of Interstellar nudges science fiction-loving movie-goers through culturally enriching, educationally entertaining, geo-historically enthralling adventures, thanks to:

The Science of Interstellar by Kip Thorne ~ Available now on Amazon

Wormhole travel could occur much closer to home: As travelable shortcuts, wormholes may connect not only two universes but also two distant regions in the same universe. ~

Ad astra per aspera ("to the stars through hardships"): terrestrial challenges impel main characters of "Interstellar" into interstellar overdrive ~

Orion 10015 StarBlast 4.5 Astro Reflector Telescope (Teal) ~ Available now via Amazon ~ This is one of the telescopes I happily use to scan the skies!

Mira, English-language science fiction plots and styles particularly are influenced by the Mars-directed writings of Isaac Asimov, Ray Bradbury, Arthur C. Clarke, and Robert A. Heinlein. Can it be one of those four that you're thinking of?

Yes, Mars, with its water as ice, is certainly interesting. I read somewhere how this whole interest in Mars began in science fiction but now I forget.

Mira, It'll be interesting to read the perspectives -- on our galaxy, solar system, and universe -- which Mars gives us if the data collected and being gathered is made available and understandable and if astronaut landings actually take place 15 years from now.

This just boggles the mind. I think they have developed outrageous theories based on very little scientific, demonstrable proof. I agree that it's hard to conduct many experiments when you want to find out the origin of the universe, and I also agree that the efforts to understand these things are commendable, but . . . :) Anyway, I can see why wormholes would be comsidered unstable. It appears that much of the universe IS unstable. I'm surprised our Solar system is so dependable :)

Mira, Wormholes are complicated for science too since they're unstable and -- according to theory -- would keep trying to close up even when they're being used.

I love science fictional accounts of wormholes but the physics is definitely too complicated for me :) You, on the other hand, seem quite passionate about it lately. I also have some conceptual problems with theoretical physics. Just how exactly they go about postulating the number of dimensions in a universe. I know they have equations and it all has to work out, but maybe the equations should also be different in those universes, don't you think?

The biopic The Theory of Everything approaches the world-loved theoretical ph... 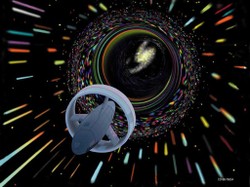 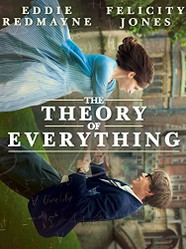 The biopic The Theory of Everything approaches the world-loved theoretical physicist that he becomes by way of Stephen Hawking's personal, professional, and romantic attachments.
60%  0   8 DerdriuMarriner
Discovery 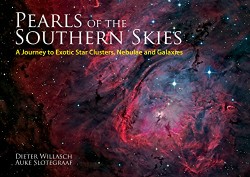 Pearls of the Southern Skies by Dieter Willasch and Auke Slotegraaf uses images and text to tell which southern hemisphere season best shows each of 71 beautiful deep-sky objects.
Loading ...
Error!