Conservatives and Liberal Democrats are in power but are losing seats to Labour. What a whirlwind our elections are.

So now the nation seems to have voted against our current coalition government. And so the tide seems to sweep back in Labour's favor. How truly annoying!

It would seem as a nation we are pretty fickle.

Just two years ago we all voted in the general elections and I considered it a rather important election for a few reasons.

Now the coalition government have been in power for two years and are trying their utmost to reduce the nation's debt so we do not like them anymore.  The fact that it is a coalition shows that we were uncertain as a nation who to choose.  They are making cuts (Before they were elected, Mr Cameron called them '£6Bn savings') and it hurts! As a nation, we all feel the pain of it.  The fact that only 32% of UK citizens voted shows again that there is an increasing disillusionment with the political parties in power but what choice do we have?

Even I forgot to vote!

I am disturbed however by the fact that people are voting Labour back in.  Have we all forgotten just how badly they did the last time?  They left us in this mess and if they were in power, who knows whether it would be any better.  For goodness sake, they left a note for the new Chancellor stating there was no money in the kitty! (The Indiscretion shown by Labour just increases!).  What we do not need is constant upheaval when trying to chart a course to economic recovery.

Do I agree with all the Coalition does?  No, but when it comes down to it, all I need is freedom to look after my family and leave all those politicians to talk themselves to death about things that are irrelevant to the common person.

I just wish they would reduce the Taxes.  Who thought it was a good idea to pay tax anyway?

Or maybe David Cameron is the man for you?

Have you got something to say? Join us now on Wizzley. 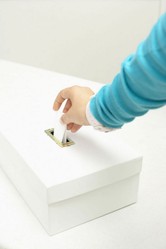 Should Adult Children stay at home with their parents?on 06/03/2012