The Walking Dead Returns With A Bang

AMC's The Walking Dead Season Five kicked off with a very explosive first episode. With Rick Grimes and his people got reunited in Terminus along with a handful of survivors that Glenn came across with on his way to Terminus.
However, it was too late for them to realize that the Terminus was occupied by flesh eating cannibals.

On the Road To Terminus

The survivors of Rick Grimes people were scattered after The Governor attacked the prison with his new found army. Eventually, The Governor's group was defeated but not before rendering the prison defenseless. The prison was easily overrun by the walkers. After the battle, the survivors were scattered into small groups. Though separated, they all searched for place called Terminus -- a place that were lead to believe as a "Sanctuary for all". As they travel separately towards Terminus, each group struggled against different obstacles.

Lizzie, travelling with her sister Mika, Tyreese and Carol  and with Judith (Rick's baby), had become mentally unstable.  Lizzie murdered Mika, believing that she would be the same Mika, when she turns into a zombie. Carol, reluctantly killed Lizzie to protect the baby.

Glenn, who was left behind after the commotion, convinced Tara -- who was part of the Governor's group -- to come with him. Along the way they met three new survivors -- Sgt. Abraham Ford, Rosita Espinosa and Dr. Eugene Porter. The three are on their way to Washington D.C. on  Dr. Porter disclosed that he knows the cause of the zombie outbreak and perhaps he also knows the solution. On their way to Terminus, they were reunited with Maggie's group. They reached Terminus and were greeted by a woman named Mary and offered them food.

Daryl, who was travelling with Beth Greene and found temporary refuge in an abandoned funeral home. Amazingly, it was kept clean and in order. Eventually the funeral was invaded by walkers. While Daryl was covering Beth's escape, Beth appears to have been grabbed by someone in a car. Daryl tried to pursue the car on foot.

Exhausted, Daryl sat on a crossroad he was confronted by a hostile group led by a man named Joe. Daryl was forced to join them and abide by their simple yet strick rules. The punishment in violating the rules-- death by mugging.  Unknown to Daryl, that same group had a run-in with Rick recently. Rick killed one of the group's member.

One night, while Rick, Michonne and Carl was resting, Joe and his group attacked -- with Daryl lagging not far behind. As Dan - one of Joe's men, tries to rape Carl, the other two were attacking Daryl, Rick hit Joe and bit his neck, killing him. They also killed the rest of Joe's group. They moved on heading to Terminus.

When they arrived at Terminus, Rick hid their stash of extra weapons and entered Terminus over a fence. They met Gareth -- the leader of Terminus. Gareth convinced Rick and the rest that they are welcome there and need not to be hostile. They were led by Alex to the front and offered some food. Rick however noticed Maggie's and Glenn's gear. Rick took Glenn's watch from Alex and pointed a gun on his head. As Mary prepares to shoot Rick, Rick spun around-- Mary shot Alex in the head as a result. The gunfight that followed led Rick and his group, to a dead end and were forced to drop their weapons. 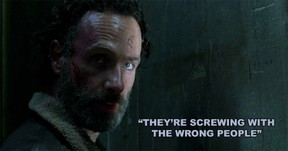 They were forced to get into a box car where they were re-united with Glenn and the rest of the group in that box car. Rick, remarks in the end "They are screwing with the wrong people!"

The Walking Dead Returns with a bang A flashback depicts that the inhabitants of Terminus was assaulted and captured by a group of marauders. They were locked in a boxcar and being treated inhumanly. That's where Gareth declared that they need to become the butcher.

In the present day, Rick and his people attempts to over power their captors when they open the box car to get them. They created make-shift weapons from whatever they have and could find in the box car. However, they did not expect that a flash-bang grenade would be thrown in first.

Gareth's people took Rick, Glenn, Daryl, and Bob to be butchered along with two unknown men.

Meanwhile, Carol and Tyreese, who hasn't reached Terminus yet learned from Martin (a resident of Terminus) that Rick's group was captured. Carol went to rescue Rick and the rest of the group while Tyreese stayed put to guard Martin. Later, Tyreese was forced to kill Martin when the latter threatened to kill Judith.

Covering herself with blood and guts of a walker, Carol, walked with a herd of walkers heading to Terminus. The herd was perhaps attracted to the gunfire started by Rick, Shooting a whole with a sniper rifle on a gas tank, Carol then blew the leaking tank using a firework she took from Martin.

The explosion startled Gareth and the other two butchers who already killed the two unknown men and about to kill Glenn next.

Using an improvised knife he concealed in his pants, Rick got loose and killed the two butchers. They went off to rescue the rest of their group. Before they got out, Rick wounded Gareth with an AK-47 rounds.

They went to retrieve the stash of weapons and supplies that Rick hid before they went into Terminus. Rick wanted to go back and kill the rest of the Terminus residents, but the rest of the group convinced him that it is no long necessary.

Before they left, Rick  changed the Terminus sign to "No Sanctuary".

What Will Happen Next?

Season 4 left us some with some unanswered questions, so does the first episode of season 5

Rick and his people may have escaped Terminus, but what will happen next?  Here are some of my questions.

So many questions! Which means we have to watch it episode by episode to get our answers.... and get more questions along the way

I am a HUGE The Walking Dead Fan!!! I was very pleased with the first episode of the 5th season. WOW was that something? Great article. I love how they redeemed Carol. She got a bum rap last season IMHO I can't believe they got BOB! OMG, what do you think will happen, will he make it out? I think he will I think she will find him, did you watch the talking dead and see the sneak peak? maybe I shouldn't say. But anyway I think he will be avenged and saved by the gang and I hope they take those cannibals OUT! 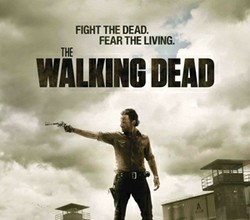