In America, it is a big deal when a filly takes on colts in the Triple Crown. But in Canada, fillies not only enter these big races, they often win.

When Inglorious won the 2011 Queen's Plate at Woodbine Racetrack in Toronto, she joined a long list of fillies that have won at least one of Canada's Triple Crown races. It's something unique that sets the Canadian Crown apart from the American one. Very few American fillies have even competed in the American Triple Crown of racing, which consists of the Kentucky Derby at 1-1/4 miles, the Preakness Stakes at 1-3/16 miles and the Belmont Stakes at 1-1/2 miles. All three races are run on dirt, although at three different tracks and various distances that have changed occasionally over the decades.

Only three fillies have won the Belmont, which was first run in 1867. Ruthless claimed the inaugural running and Tanya won in 1905. It was more than a century before another filly, Rags to Riches, accomplished the feat in 2007.

Things are much different in Canada.

The Canadian Triple Crown begins with the Queen's Plate (or King's Plate, depending on the monarch of the day), currently run on Polytrack but until recently run on dirt. The distance today is 1-1/4 miles. The second race is the Prince of Wales Stakes on dirt over 1-3/16 miles, followed by the Breeders' Stakes, currently at 1-1/2 miles on turf.

While the distances are the same as in the American Triple Crown, the races are later in the year and the dates may vary from one year to the next. They take place between mid to late June and mid-August. But the difference in the filly stats in these three races compared to the American classics is astounding.

There are two filly winners of the Canadian Triple Crown: Queensway in 1932 (before the term "Triple Crown" was actually created) and Dance Smartly in 1980. Genthorn is the only other filly to finish in the top three in all three classics. In 1952, she was second in the Queen's Plate, third in the Prince of Wales and then won the Breeders.

Four fillies have won two legs of the Canadian Triple Crown. Lyddite and Butter Scotch won both the Plate and the Breeders. Song of Even (1961) and Young Kitty (1928) each won the last two jewels in the Canadian Crown.

Breaking it down by the individual races, as of 2012, 34 fillies have won and many have been second or third in the Queen's/King's Plate, North America's oldest continuously run sporting event. The first running was in 1860. Six fillies have won the Prince of Wales since it began in 1929. Another filly, Milwaukee Appeal, lost by a whisker in 2009. Twenty-eight fillies have outstayed the colts to win the Breeders' Stakes on turf. In fact, the very first running of this race went to a filly named Helen Leigh back in 1889.

The big question here is, why the huge difference between the two countries?

One reason could be Canada's links to Great Britain, where fillies regularly take on the colts, and that Canadian owners, and trainers simply approach racing differently.

Leading trainer Mark Casse suggests it is a matter of the size of the foal crops in Canada. While the American classic races are open to 3-year-olds foaled anywhere, only horses foaled in Canada can compete in the Canadian Triple Crown races, which limits the number of eligible horses.

“The Kentucky Derby is a much tougher race to win, in my opinion,” he added. “Most US trainers, if they thought they could win the Kentucky Derby with a filly, they would not hesitate to run.”

However, many American owners and trainers do hesitate to race fillies against colts, even in a race like the Kentucky Derby. Gregory Ferraro, the director of the Center for Equine Health at the University of California- Davis, said in 2009 that there is little incentive to run fillies against colts, since there will be no big payoff down the road in terms of stud fees. Classic-winning colts can earn a fortune in the breeding shed, siring hundreds of foals, while a mare generally produces between five and ten foals on average in her lifetime.

“Most guys don’t want to get their fillies beat,” Ferraro said. “There’s just as much money to win in a race for fillies. It doesn’t increase her value that much to beat the boys.”

Even so, that may change when American owners and trainers think about what happened in Europe in October 2011. For the first time in history, fillies finished 1-2-3 in the prestigious $5.3-million Prix de l'Arc de Triomphe in France. The winner was the 3-year-old Danedream. Clearly, a good horse is a good horse — even if it's a filly. 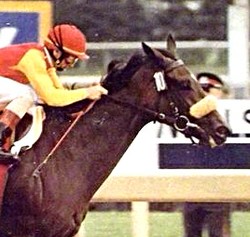