Hip Hop was in full swing in the 80s. Find out how it develop, coming out of its origins in the South Bronx, New York.

Noticeably, much of what was seen in Hip Hop during this era was comic relief and pure entertainment. While in the early days there were the socially conscious lyrics of Melle Mel, and also a mixture of party songs, the mid 80s ushered in an era of novelty acts and pure comedy and entertainment. Such acts as the Fat Boys, UTFO, and the Real Roxanne were massively popular acts that provided primarily an entertainment outlet with no consciousness raising value whatsoever. It appealed to adolescent tendencies and bordered, intentionally, on the absurd; however, I will admit, at the time I was highly entertained, myself being an adolescent starving for some kind of stimulation. One of the most notorious and prolific song series of this period was the Roxanne Wars: It began with a song by UTFO (Untouchable Force Organization) about a girl who was incurably stuck up; the song was followed by a massive series of follow ups, some by the Real Roxanne; some by Roxanne Shante, a member of the slick DJ Marly Marl's Juice Crew; some by so many various off shoots and copy-cats it would be impossible to list. One thing is certain, it provided years of entertainment and record sales.

Without a doubt, Kangol Kid, Educated Rapper, and Doctor Ice had style; a unique style, each like a character in a comic book; and such were the novelty acts of the time.

UTFO's Kangol Kid and Doctor Ice were break dancers, originally, who had toured with the Hip Hop group called Whodini; a much more sophisticated variety of rappers, who, while never delving deep into social or political issues, did delve into personal issues in a relatively global way which made it easier for many to relate to their music. Their big hit "Friends" was an example of how they touched on issues common to most people and made them emotionally accessible to a wide audience.

We can't talk about the mid 80s without mentioning a movie called "Krush Groove". While there were Hip Hop movies before "Krush Groove", this particular movie ushered in a new era of Hip Hop mainstream: It featured the legendary Kurtis Blow, Run DMC, the Fat Boys, and that Supa Dupa Fly Girl Sheila E. Actually, Sheila E. was already a well known drummer and super star well before Krush Groove, having performed with Prince: Seemed to be an era of music in movies, Prince having put out "Purple Rain" which featured Appolonia and Morris Day, and Vanity having appeared in the Hip Hop martial arts extravaganza "The Last Dragon" with Taimak.

At any rate, Krush Groove had many cameos, including a pretty serious pre-gangster era gangster style rap by the now very famous L.L. Cool J. Also in the line up was the not so well known Dr. Jekyll and Mr. Hyde.

Interesting, the movie essentially follows the career of Russel Simmons, Hip Hop record mogul, from his relatively humble beginnings; it also follows his business partner Rick Rubin, both of these men responsible for getting the Beastie Boys, Run DMC, and Public Enemy into the lime-light. In addition, Run (Joseph Simmons) from Run DMC, Russel's younger brother, is highlighted in the movie.

As Hip Hop became better known and even began moving into the mainstream, the media giant MTV had to take notice. Next time, we will explore the advent of Hip Hop on the MTV scene, and how Hip Hop continued to evolve in the late 80s. 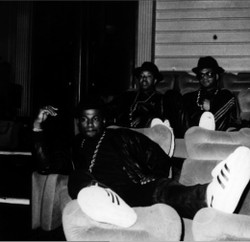