Some of The Consequences of Tobacco smoking in Young Adults and Teenagers.

We all know that tobacco smoking is bad for us and yet nicotine is a highly addictive substance that makes ceasing tobacco smoke pretty difficult.

How much more for our young ones? With three little ones of my own, I am all too aware of the need to protect them from developing this habit at a young age. Did you know that if a person does not smoke before the age of 26, then they are unlikely to ever start?

Dissuading our young adults from smoking is as essential as taking out health insurance for young people. We can insure them against ill-health early on in life if we can just pay attention and prevent them from taking on a habit that is hellish to yield.

Did you know that the sperm and eggs of parents who smoke are already affected by the toxins present in tobacco smoke?  These toxins are DNA- damaging!

So how much more are young adults, who breathe these toxins directly into their own lungs, susceptible to all manner of bad health and disease?  The younger a person starts to smoke, the more damaging the effect as they are not yet fully grown so exposing themselves to toxins from tobacco that are likely to embed themselves in the wrong places will cause disease.

For diseases like lung cancer, the risk of developing this increases with the amount of time one has smoked for, not the number of cigarettes smoked.  This is slightly different for chronic obstructive pulmonary disease (COPD) where the total number of cigarettes smoked over a lifetime directly relates to the risk of the disease developing. Either way, if a person starts to smoke young then they are more likely to develop one or more of these conditions at some point in their life.

Something else to consider is that the younger the age of tobacco smoking uptake, the higher chance there is of heavier smoking later on in life, a higher level of nicotine addiction and dependency, a lower chance of quitting and a higher death rate!

The Guy died Helping others to stop - We all know the best ones have to die for their work to be appreciated!

Reading through the US Surgeon General's report, there seems to be an increasing number of research articles citing connections between smoking and mental health disorders in young adults and teenagers.

Things like schizophrenia, depression, anxiety seem associated with smoking.  However, there is still an element of uncertainty as to what is causing what.  Is the tobacco smoking causing the mental health concern or is there already a predisposition to mental health disorders that then lends itself to tobacco smoking?

More research needs to be done to define the connection more precisely.

Early smoking can cause the damage to the blood vessel that carries oxygen-rich blood from the heart to the abdomen and major organs.  The blood vessels narrow and atherosclerosis happens.  This is a condition usually seen in older people but it is becoming increasingly visible in young people as well.

It also has an effect on the ability of your body to produce insulin which is used to break down glucose.  If insufficient insulin is produced, there is the possibility of diabetes which also leads to heart disease.

Tobacco Smoking usually is the start of a downward slide into harder drugs.  I have seen this on numerous occasions amongst patients in the pharmacy.

The drug users who avail themselves of methadone ( a replacement therapy to help them reduce and eliminate their harder drug use) within the pharmacy usually started with cigarettes or rolled tobacco and then found themselves drawn towards harder drugs to satisfy their increasing cravings.

Get Determined to Quit that Tobacco Smoking!

There is evidence to the fact that young people who start tobacco smoking early are less likely to have lungs that grow to full adult size.  Therefore, their lungs never work to full capacity.

This is due to the fact that teenagers are still growing so introducing the damaging toxins contained in cigarettes can literally stop the lung from growing any further.

The big concern would be that even if the young person manages to quit smoking, their lungs may never actually reach full adult capacity.

Prevention, they say, is better than cure.

We all know it causes cancer and it can cause cancer anywhere in the body, not just the lungs.  The toxins present in the tobacco smoke damage DNA.  This damage can result in the development of cancer.

Who wants that for the youth?

Come into my Pharmacy

Lets finish on a high note...

If a young person quits smoking by the age of thirty then most of the above effects will be reversed. No, Quitting is not easy so it would be best to never start smoking tobacco.

it may be too late to dissuade you from starting so I encourage you to seek help from your healthcare professional to quit tobacco in all its forms.

Being a Parent - Being Pregnant and Smoking
Most people know that smoking while pregnant is a bad idea but knowing it and quitting smoking are two different things.

Places to find out more about how to quit Tobacco Smoking

A Report on Teenage Smoking

Indeed smoking is really bad. and yet people find it so hard to stop. Hopefully, a little more education will stop at least one young person from starting to smoke.

Thanks for your input.

This is one very useful article! We all know about bad things tobaco does to our health, but yet the majority of population smokes cigarettes.
As a medical worker, I know there is no such part of the body that is not affected by the nicotine and cigarette smoke. It is really silent killer. 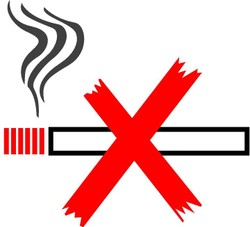 The Easy Way to Stop Smoking: Join the Millions Who Have Becom...
100%  14   14 JoHarrington
Emergency Preparedness

A medical emergency could happen at any moment. The question is whether you have the knowledge to save lives. We should all have that.
100%  10   10 DerdriuMarriner
Environmental Health