This is a bread most of us "grew up" with, but with some modifications. The ingredients are much more healthful than what you'll buy in the store. And NO preservatives.

I started this as a quest for the perfect home baked sandwich loaf. In my search I ran across a recipe by Paula Deen, but I had problems with it. Though it is a very tasty bread the original recipe had a lot of fat in the form of butter and milk and quite a bit of cholesterol in the form of eggs. I set out to make as sweet and savory a loaf with half the fat and cholesterol. My immediate family found it irresistible.

Because Deen's original recipe called for six tablespoons of butter and a cup and a half of whole milk, I knew this was going to be a dietary "H" bomb for those of us who want to eat healthy without packing on a lot of extra calories. Also, her recipe calls for two egg yolks and an egg white; I know from experience you don't need eggs in bread dough to get a good loaf.

So I took the original recipe, made my own modifications, and succeeded in cutting those two delicious, but offending, ingredients in half.

There's some good news here too. This takes a total of three hours including two, one hour rising stages, to make this bread. Also, with my modifications, the fat content is way down and it is still a very sweet (for plain bread) and savory bread.

So you know there are two people and a dog in this household. That first standard sized loaf lasted slightly more than an hour.

I have an armed guard on the second loaf, but since I am that guard I don't trust him to keep his mitts off of it.

Yes, it is that good.

For this recipe to work well you'll need a stand mixer with a four and a half or five quart bowl, a dough hook, two medium sized mixing bowls, two bread pans, and a baking sheet.

As home made yeast breads go, the amount of time spent on this one is relatively low. Two of the three hours are rise times with the other hour devoted to mixing and baking. 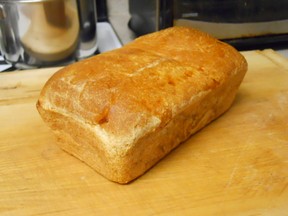 A lower calorie and choleterol version of this old classic

Prepare the stand mixer bowl by filling it with hot tap water and letting it sit for five minutes. This is to get the bowl warm so that when the water and yeast are added they will be at the right temperature.

Let this mixture sit for five full minutes. At the end of that time you should see a foam formed at the surface; this lets you know the yeast is activated.

With the dough hook, mix at medium speed until blended.

Add the egg yolk, 1 cup of whole wheat, 2 cups of the unbleached flour, the rest of the sugar, and the salt. Mix this at low speed for about 5 minutes without adding any other ingredients.

With the mixer still running at low speed, slowly add 2 more cups of unbleached flour. After about two minutes the additional flour should be incorporated into the dough, but the dough will still be sticking to the side of the bowl.

Now raise the mixer speed to medium and slowly add just enough of the remaining 1 cup or flour so that the dough doesn't stick to the bowl. It is best if you add 1/4 cup at a time, let mix for thirty or so seconds, and check to see if the dough is coming away from the side of the bowl. If not add another 1/4 cup and watch the dough closely waiting thirty seconds before the next quarter cup. You have added enough flour when the dough pulls away from the side of the bowl.

This is a good way to do this because if you add too much flour you can't take it out or add more liquid.

Once the dough has pulled away from the side of the bowl continue to knead on medium speed for about 8 minutes, adding very small amounts of flour if necessary. You will know if the kneading is working the gluten into the dough if the dough starts to "climb" up the dough hook.

At the end of eight minutes or when the dough is mostly on the hook, turn off the mixer and dump the dough out onto a lightly floured surface. Hand knead for about a minute; this is to insure that the gluten is well formed. The dough should be very elastic and smooth.

Oil your medium sized bowl with grape-seed or olive oil (just enough to barely cover the bottom) and put the dough in the bowl. Turn the dough so it is evenly covered with oil.

Cover the bowl with a damp kitchen towel and allow it to rise for one hour or until doubled in volume.

Using grape-seed or olive oil "grease" the bottoms and sides of two 9 x 5-inch loaf pans. Turn the dough out on a lightly flour dusted surface and cut the dough in half. Gently shape each half into a rough loaf shape (It does not have to be perfect, but it does have to fit the pan). Place these formed halves into the loaf pans and cover both pans with a slightly damp towel. As before let the dough rise for an hour or until doubled in volume.

Ten minutes before the end of the last rising hour, preheat the oven to 350° F (180° C). When the dough is ready, lightly oil the tops with just a small amount of olive or grape-seed oil.

Place the loaf pans on the baking sheet and bake the loaves for 40 to 45 minutes. You will know if they are done by tapping on the center of each loaf. If it sounds hollow the loaves are done.

Let the bread cool in the pans for ten minutes and then turn the loaves out of the pans and cool completely on a wire rack before slicing. Allow the loaves to cool on the wire rack for at least ten minutes.

All the photographs are by the Author

Differences Between Paula's and This Bread

Not quite half the fat and calories plus more flavor

The amount of honey and sugar are the same, but I'm using a third less salt than the original. Also, I'm using 1 cup of whole wheat; just enough to add some much needed protein and flavor. I am also using half the butter, which is very important to the flavor and half the egg.

With the whole wheat, butter, honey, and sugar this bread is both sweet and mildly savory. It is also better nutritionally and still has that pleasing home-baked freshness.

If I don't mind saying so, I think this is better than Deen's original recipe and that was pretty good to begin with. If you don't believe me, ask my brother and my dog. That first loaf was gone in less than two hours.

Notes on this Recipe

The following notes will help you cook a delightful white bread as well as explain why some of the steps are taken:

Please do not use bleached four with this recipe. Higher heat is required for bleached flour and this bread will not cook properly at those higher temperatures.

By cutting the butter and egg quantities in half I've greatly reduced the "bad" calories. I've left some of the butter and all of the sugars in the mix because both of these add greatly to the mild sweetness of the bread. The sugars also kick-start the yeast. The addition of "whole wheat" flour and olive or grape-seed* oil also adds some much needed nuttiness to the flavor profile as well.

By using olive or grape-seed oil to "grease" the pans you get a nice light crispy crunch in the crust all the way around. As you can see from the pictures, this is a nice looking bread too.

The flavor and aroma are amazing if I do say myself.

* I strongly recommend grape-seed over olive oil because the former has little flavor while adding the much needed oil to the mix.

Ciabatta is Italian for slipper. This is fitting since the finished loaf is s...

This is a simple recipe for rustic, country style bread. It is called Boule, ... 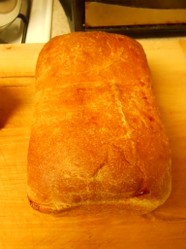 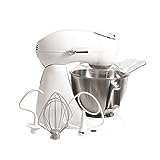 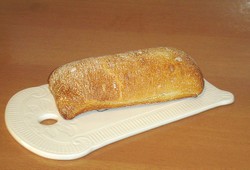 Ciabatta is Italian for slipper. This is fitting since the finished loaf is somewhat slipper shaped.
7%  0   1 LiamBean
Bread Recipes 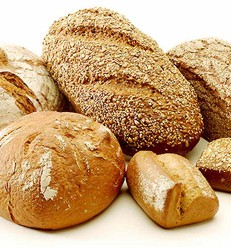 This is a simple recipe for rustic, country style bread. It is called Boule, French for "ball," due to its shape.
Loading ...
Error!