Understanding the Theatre of Japanese Kabuki

If you get a chance to attend a Japanese theatre performance of Kabuki play, you will be struck by the aura and ambience of the decorations both at the entrance and interiors.

My first encounter to Kabuki was through an entertaining Japanese television program from NHK in English. This Japanese channel brings in the food and culture of Japan. Kabuki is the Japanese theatre of art and dance. Dramas of this interesting theatre captures spirit of Japan, the heritage of Japanese and their ancestors. Kabuki continues to capture the heart of people who are in awe of Japanese culture.

Japanese Art puts stress on intrinsic details. The mood is already set by this unique decorum emanating from the auditorium and the actors. Ladies in kimono, Geishas in exorbitant splendour.

Image is mine
© copyright WriterArtist 2019, All rights reserved

Today’s Kabuki performers represent 10th generations and more of their forefathers. The descendants of Kabuki value their acting styles and costumes inherited. Although parts of this ancient drama is struggling to maintain it in it’s puritan form, there is much difficulty in keeping it authentic.

It is their way to express respect to this ancient culture and heritage and while they strive to improvise to make it appeasing for the audience, it is important to keep the core of Kabuki at its heart and cognizance.

For an outsider to Asian culture, it is tricky to appreciate the nuances of Japanese drama. One may perceive the acting as exaggeration; however it is important to remember that overplaying theatrics add to the drama. To enjoy the dramma one has to get immersed in the story and the unusual style of narration.

To appropriately perceive the Kabuki theatrics, one must prepare oneself before entering the theatre. It is similar to anticipating entrance to the "Land of Colour and Dreams". One has to at least have some exposure to Japan’s culture, only then one can appreciate this ancient beautiful art of Dance and Drama preserving some of the history’s most colourful extravaganzas.

The stage of Kabuki existed and lasted approximately for around two hundred and sixty years in ancient Japan. This period was the Tokugawa era also popular as Yedo or Edo era. The preambles of Kabuki were born in Edo era and flourished due to its many foundation actors and actresses. This was also a relatively quiet period, at the beginning of 17th century and lasting till the Imperial rule of Meiji restoration.

The pronounced effect to Japanese philosophy of life and Kabuki were from Buddhism, Shintoism and Confucianism. This can be clearly seen in the embodiment of characters and is embedded in the heart of Kabuki.

Even the stage presents the complexity of Kabuki and therein lies the beauty.

The Japanese sliding doors at the back of Kabuki stage where an actor appears and disappears is decorated with manjitsunagi. This bold blue and white pattern is introduced from Buddhist symbols.

Even the tricolored stage curtain signifies the meaning behind Joshiki-Maku. Three colours of black, brown and green displays the license granted to Kabuki theatres by the then powerful Tokugawa Shogunate Government.

Role of Women in Kabuki

The grand entrance of a beautiful and talented woman O Kuni gave Kabuki theatre its elegance and charm of today. Her accounts are apocryphal but there is enough evidence to establish her credentials. Her existence is real and certain.

The dance ceremony on the dry bed of the Kamo river in Kyoto was phenomenal and well documented. Her success streams from her own adaptations and variants to the Buddhist dances that were perform for public ceremonies. Her modifications were a huge access.

O Kuni’s empire began to expand with the help of her lover Nagayo Sanzaburo. After her death, the theatre and group continued to grow in the tradition of Onna Kabuki which is nothing but Women’s Kabuki. It is this time that dramatic improvements and improvisations were added in form of instruments and costumes. This was short lived when Shogunate issued a decree stopping all women to act on stage.

This edict that remained in power for long duration brought in young men’s Kabuki theatre, bringing handsome youths who dominated the Kabuki stage as sole supreme powers. This drew criticism once again from Shogunate authority which decided that physical charms of even men were detrimental to the morals of society. Once again there was a ban on Kabuki which halted the progress temporarily.

Regretfully, it is a fact that Kabuki costumes from Edo period have become extinct. The many costumes of Kabuki that audience witnesses are the ‘No’ costumes of Momoyama and Edo periods. The ‘No’ costumes belong to the Royal classes of Shogun militia and Daimyo Royals. These costumes still exist in some of the private and public collections of the families of Japanese feudal lords.

One of the prominent play role is of figure Komuso who plays an important character in the theatre. The Komuso wears a large basket like enclave that hides his head and obscures his face.

The name Kumoso comes from the follower of Buddhist priest Kakusha who after his trip from China wandered and played plaintive tones with Shakuhachi (flute). Komuso is a wandering priest preaching Buddhist principles.

During her Japan tour, Oguni and her troupe were even invited to the Imperial Palace. The troupe originally performed on the river bed and the audience at large sat on the grass.

There came in existence 2 types of permanent stages. The Kagura stage is a rectangular platform with or without roof devoid of entrance and exits and inconvenience to the performers for change of costumes. In contrast, ‘No’ stage provided for a dressing room for the actors. This stage is also found in Shinto shrines, Buddhist temples and the Royal estates of Noble families. A ‘No’ stage had greater technical feasibilities where the Orchestra and the performers could employ technical facilities for musicians, singers and dancers.

Did you get to see Japanese theatre performance of Kabuki?

@DerdriuMarriner- I would love to visit the Kabuki theater. It is certainly in my wish-list.

@blackspanielgallery - I agree with you completely. I had a chance to visit Indonesia and Thailand. One can see the culture and the beautiful heritage straightaway.

@katiem2 - It is amazing to know that your daughters have studied in Japan. I want to visit Japan, all my knowledge of this country comes through a channel I watch which is about Japan.

Both my daughters attended a World Cultures and Foreign School, they learned much about different cultures, each year focused on one primarily and yet others were covered through out. They studied Japan in their third year, it was very interesting.

It is always nice to see the culture of distant lands. It is the diversity of writers on Wizzley that makes this possible,

WriterArtist, Thank you for the back-stories, front-stories, practicalities and products. Have you seen the Kenneth Branagh film version of As You Like It? The Shakespearean play is set in Japan, where everything starts with a kabuki performance.

The beautiful art of carving and sculpting trees into art pieces was first in...

For those who love art and paintings, Gordon Lees artwork comes with a surpri... 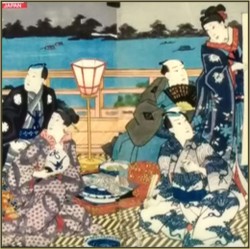 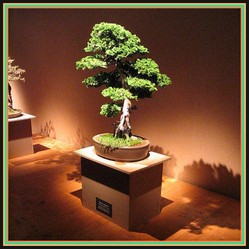 The beautiful art of carving and sculpting trees into art pieces was first invented in Japan. The bonsai trees were easy to carry while traveling and were thus used for gifts too.
46%  4   5 WriterArtist
Oil Painting 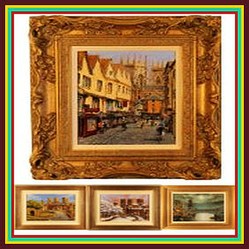 For those who love art and paintings, Gordon Lees artwork comes with a surprise element. The wonderful effect on canvas can be perceived by his imagination and creativity.
Loading ...
Error!