The Vietnam Veterans Memorials in Washington DC pay tribute to those who served in the Vietnam War. Some died fighting, others passed away later from injuries; all are true heroes

I took my first trip to Washington, DC in June 2012 to attend a ceremony honoring my late husband. He was a Vietnam veteran who served in the 1st Cavalry (Airmobile) from 1969-1971. While visiting Washington, DC, I made it a point to visit the memorials honoring the Vietnam Veterans.

"Only two defining forces have ever offered to die for you: Jesus Christ and the American Soldier. One died for your Soul and the other for your Freedom." - author is unknown.

The most well-known Vietnam veterans monument is the Vietnam Veteran's Memorial Wall, or "The Wall".  It is an amazing structure, holding the names of the over 58,000 men & women who died while serving in the Vietnam War.

Thousands of people visit this monument each year.  Many people have a child, brother, spouse or parent who fought & died in the Vietnam war, and they are driven to find their name etched in the granite.  Some visit simply to remember those who served the United States, and died doing so.  Others may just visit out of curiosity, not knowing anything about the war or the service men & women who fought in it.

Did you know someone who perished in the Vietnam War whose name is inscribed on The Wall?

There is something about this massive granite wall that beckons you to touch it.  Regardless of whether you know someone who is inscribed on The Wall, you'll find your fingers reaching out to trace a name.

Honor these men & women by taking home a piece of The Wall.  Park Rangers walk the length of the wall, and they carry pencils and paper with them.  Make a rubbing of a name.  Feel the letters as the pencil lead rubs across it.  Bring the rubbing home with you, so you'll remember the feeling each time you touch it.

If you can't visit the Wall in person, but want a rubbing of a name from the Wall, volunteers of the Vietnam Veterans Memorial Fund will be happy to provide the service - for free.  Simply visit this site and fill out the form to request the rubbing.

Leave A Tribute At The Wall

Many people bring tributes to the Vietnam Veterans Memorial Wall.  These tributes range from stuffed animals to photographs; letters to clothing; flowers, wreaths, food and everything in between.

Each evening, the Park Service collects the tributes, catalogs them, then places them in an archive.  In the future, an Education Center will showcase these special tributes.

The teddy bear tribute shown here was placed at the Wall by a friend of mine, who is a Chaplain who ministers to veterans.  Each year, she & her husband make the "Run For The Wall" with several thousand motorcycle riders to pay homage to the fallen heroes of Vietnam.

Have you ever visited the Vietnam Veterans Memorial Wall?

Just across the Mall from the Vietnam Veterans Memorial Wall is the statue of Three Servicemen.  Also called "The Three Soldiers", this statue depicts the typical soldier who served during the Vietnam War.

One white, one African-American, and one Hispanic, wearing the uniforms of the United States.  The statue is quite life-like, and you can feel not only the innocence of youth, but the agelessness of war.

The bronze shines like sweat, making you feel the heat they endured in the jungles of Vietnam.  The rifles they carry remind you that their mission was serious.  At first, you may feel they are searching out the enemy.  But if you follow their gaze, you'll see they are looking at The Memorial Wall; at the names of their fallen brothers.

A Tribute to the Women Who Served in Vietnam

The Women's Memorial is located across the Mall from the Three Servicemen Statue and the Memorial Wall.  It is the first memorial in the National Mall dedicated to women who served in the military.

Over 11,000 women served during the Vietnam war, with the majority serving as nurses.  These brave women nursed over 300,000 wounded soldiers, saving 98% of those who actually reached the hospital.

The statue is of military nurses, helping the wounded and dying.  There are actually seven Army nurses and one Air Force nurse listed on the Wall, and this statue is to commemorate their service, as well as all others who served with them.

The Vietnam Veterans Memorial Wall is for those veterans who died as a result of their service, yet after their return, cannot be included on the Wall.

Thus, the In Memory Day Plaque.  Located just beyond the Three Servicemen Statue, the plaque pays tribute to those who served, suffered, and years later, paid the ultimate sacrifice.

Each Flag Day, which is June 14th, the In Memory ceremony is held near the Plaque and the Wall, honoring these fallen veterans. At that time, the names of these veterans are added to the In Memory Honor Roll.

Visit these sites to learn more about Vietnam Veterans and the monuments that honor them:

A Tribute to ALL Vietnam Veterans

Thank you for your service!

Will You Visit These Memorials?

Regardless of your feelings about war, and especially about the Vietnam War, I hope you can put them aside and visit these Memorials.  They pay tribute to the many men and women who paid the ultimate sacrifice, and should be remembered and honored for doing so.

If you've visited these Vietnam Veterans Memorials in Washington, D.C., or hope to do so in the future, I welcome your comments below.

It's an impressive monument and worthy of a visit when in D.C.

I've been privileged to visit the Viet Nam war. but I hope to do so one day. Thank you for telling about all four of them on one page. I only knew about the wall and the one for the women, so I learned something new.

In Memory Day - An Annual Event To Honor Our Fallen Vietnam Ve... 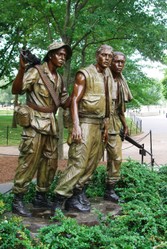 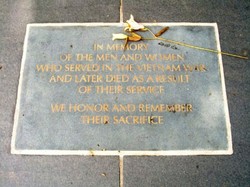