Although Gladding, McBean & Co. began their their production of Franciscan plates, cups, and bowls as dinnerware in 1934, the first production was pottery that resembled Fiestaware, with bright, solid colored Mexican style dishes. Patterns from this time include El Patio, Coronado and Montecito.

In the late 1930's, they changed to a more upscale raised relief, hand painted patterns on china, which became extremely popular and still are today. The most common, and produced patterns being the Apple and Desert Rose. These are no longer in production.

Other handpainted patterns are Ivy, October and Fresh Fruit, which can bused for everyday dinnerware, or for seasonal use. One of the most desirable and difficult to find Franciscan patterns for collectors is Wildflower, a hand painted and many colored tribute to the flora of the American west. It was produced for no more than three years.

Franciscan introduced their Fine China line in 1942. This was marketed as Franciscan Masterpiece China after 1958 and production continued in the United States until 1978. The Franciscan name appeared on fine china from around the world after that time, but will bear a backstamp indicating the country in which it was produced.

Franciscan China from the 1950's

The 1950's saw a departure from the traditional look of the original china patterns of the 1930's and 1940's.  One of the new patterns was Starburst. Starburst would prove a radical departure from prior tradition and used an irregular shape and abstract radiant stars resulting in a very modern earthenware pattern. Starburst and other patterns of that era have become highly collectible, due to the shape and design of the 1950's.

Earthenware and casual dinnerware became very popular in the 60's and 70's and Franciscan followed suit by creating some patterns with the prevalent color schemes of gold, and olive green.  Patterns of this time are Madeira, and Picnic.

If you are looking to give vintage Franciscan dinnerware as a gift, finding rare pieces or patterns, or full sets of plates is a good way to start.  Dessert plates make a wonderful gift as they can be used for entertaining friends and family, but you can also look for the rest of the dinnerware, such as bowls, full place settings, serving pieces, salt and pepper shakers, and dinner plates.

Tea cups and saucers go well with dessert plates.  If you do some research on Franciscan China, you will find distinct periods of time for production of various patterns, and the marks to look for on the dinnerware.  When shopping on Ebay, feel free to ask questions of the sellers to be comfortable with what you are buying.

I have included a wonderful reference book below to help you discern the patterns and value of the various pieces to make sure you are getting a good price.  And you can click through the links provided for more details and pictures of each item.

Don't Forget the Rest of the Franciscan China Dinnerware

Retro, Vintage, or Kitsch?
Shopping at second hand stores, vintage clothing shops, and used clothing stores, once solely the shopping domain for the poor, has now become trendy and practical.

Vintage Easter Egg Decorations From Around the World
One of the most tradition Easter decorations is the Easter egg, so it is not surprising that there are wonderful Easter egg decorations to choose from including some l...
Features of Scandinavian Contemporary Furniture
The period of Scandinavian design that inspired the making Scandinavian contemporary furniture took place in the 1950’s. Compared to other parts of Europe, the i...
Cobalt Blue Glass Glassware
I Love the Color Cobalt Blue When Combined with Glassware Cobalt is my favorite color especially in glassware. I am a glass lover to begin with because of the way any ...
Updated: 09/27/2014, lakeerieartists
Thank you! Would you like to post a comment now?
2

My ex mother in law had some china that looks very similar to the ivy set. Not sure it was the same. But looks just like it. Great pieces and it also reminds me of my grandmother will all the different china patterns that she had. Thanks for bringing up a lot of good memories. 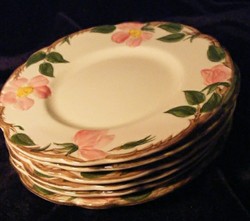