Visiting the Mysterious Bourne Stone at the Bourne Historical Society

If you love ancient artifacts and the mysteries that surround them, make time for the Bourne Stone on your next Cape Cod vacation.

The Bourne Stone is a large slab of pink granite that measures about 4 feet long and 2 feet wide and weighs about 300 pounds. That's about all that anyone can agree on. Like many ancient artifacts found in southeastern Massachusetts, its history melds together native American and colonial cultures. There are markings on the granite that some experts believe are important messages. Other experts believe that these are nothing more than scrapes caused by the weather.

Recent interest in Viking and Templar voyages has lead to speculation that it is a runestone and could be part of a larger web of information. It is called the Bourne Stone because it was first seen in the small New England village of Bourne, Massachusetts. The Bourne Historical Society now houses the Bourne Stone at its headquarters within the Jonathan Bourne Historical Center. It is open to the public and anyone can visit to see this ancient artifact.

Photograph of the Bourne Stone

The papers help guide you to the markings.

Known History of the Bourne Stone

The Bourne Stone is first mentioned as a door step to a Native American mission or meeting house that was established by Thomas Tupper (1578-1676). Tupper was a leader in the Town of Sandwich serving on the board of selectmen from 1667 to 1670. He was also a lay preacher, who served when there was no minister. He was particularly concerned about the religious life of the Native Americans in the community. The mission was located near a Native American burial ground.

After the Native American mission closed, the Bourne Stone was owned by several more Native Americans and eventually colonial settlers. This includes a person by the name of Andrew Jackson. His land is also known as the Katharine Parker homestead. Eventually a Miss Fisher owned the Bourne Stone and she sold it to Percival H. Lombard. Lombard was a local historian who oversaw the archaeological digs at the nearby Aptucxet Trading Post in the 1920s. It was the first trading post in Plymouth Colony.

Granite slabs were commonly used as doorsteps in the 1600's in the region. This is the front step of the Hoxie House, which was constructed in the 1630's, about the same time period of the Indian mission. It is reasonable to assume that the Bourne Stone would have been used in a similar manner. Because the structures were all made of wood, it isn't surprising that none of them survive today. Even the Hoxie House, which is often referred to as the "Oldest House on Cape Cod" is a reproduction of the house that stood there in earlier times.

Here's a Video of My Visit to the Bourne Historical Society

Figuring Out the Real Meaning of the Bourne Stone

Why is there so much disagreement?

While the Bourne Stone remains a mystery, it hasn't been because the Bourne Historical Society wants it that way. Over the decades, many distinguished academics have attempted to unravel its true meaning. The first difficulty is that it's an old rock with a lot of scratches. Much of the academic discussion has centered on what's a man-made letter and what has been worn away over time by natural forces. Adding a swirl here or there, can change the meaning. One researcher actually brought in a blind person to help figure that out.

There is also the possibility that an ancient culture was using codes made up of one or more languages. It would be impossible for anyone to translate the Bourne Stone, if this is the case.

Then there's the theories that are in vogue at the time. Earlier interpretations reflect the Christian values of the early Colonial settlers. Interpretations in the Sixties and Seventies reflected the new historical view that Christopher Columbus did not discover America. Researchers used the Bourne Stone to bolster those claims.

Recent interpretations reflect a new respect for Native American or First Peoples. Researchers are now trending toward the belief that these are Native American glyphs that rise organically from these cultures and not from European conquerors.

It's not a runestone

As far back as 1948 local historians worked with world-renowned experts to determine the true origins of the Bourne Stone. The most recent investigation was carried out in June 2014 by Professor Henrik Williams of Uppsala University in Sweden.

Williams is considered to be one of the leading experts in runestones. These stone markers are part of Viking culture and have very distinct styles and markings. Williams found that the markings on the Bourne Stone were quite old and made by humans. However, it is not a runestone. He did believe that it is probable that the markings are Native American glyphs.

A 1948 book by Olaf Strandwold contains a picture of the Bourne Stone. Strandwold took the lettering on the inscription and translated it into Western lettering. He then determined that the phrase on the stone read "Jesus amply provides for us here and in heaven." Henrik Williams disagrees with this translation. He cites examples of Stranwold excluding symbols and misusing an Old Norse dictionary.

When you remember that the Bourne Stone first appeared at an Indian Mission established by a colonial lay minister, it's not unreasonable to think that it might be an Indian inscription with Christian overtones.

Columbus did not discover America

The Barry Fell reading of the Bourne Stone is perhaps the most famous of them all. Fell (1917-1994) was a Harvard professor. However, his specialty was marine biology and not ancient texts. He used artifacts to show that many civilizations reached the Americans before Christopher Columbus. Decades after his death, his work continues to be controversial.

He read the Bourne Stone as Norseman Karlsefni taking control of the land - A proclamation of annexation. Do not deface. By this Hanno takes possession.

Reading Fell is where I first learned about the Bourne Stone

Used a blind man to determine natural or man-made lines

Kirby was a professor of medieval English. All of these interpretations rest upon looking at an ancient stone and deciding which line was made by weather and which was made by man. Kirby went so far as to use a blind person to feel the Bourne Stone to help determine which lines should be considered.

He determined that both roman letters and runes were used in the Bourne Stone. This would date the stone to the period after Christianity entered Scandinavia. It is hard to evaluate Kirby's findings, because he did not provide a picture of his interpretation of the visual lettering.

Paula Emerson and Larry Zimmerman both have an expertise in Native American archeology. After examining the Bourne Stone at their facilities, they determined that it was not a runestone. They believe that the markings are either natural or Native American glyphs.

Learning about Local History Through Artifacts

Will the mystery of the Bourne Stone ever be solved?

I seriously doubt, that we will ever know the true meaning of the Bourne Stone. However, that doesn't mean that it isn't worth knowing about it and the controversy that surrounds it. Sorting through numerous academic findings forced me to understand how these experts were evaluating the stone and why there continues to be so much disagreement.

It's also interesting to be able to wander into a nearby historical society museum and look at the actual ancient artifact. It made me consider my past and want to know more about it. My father's family has lived in Sandwich since the time of Thomas Tupper. So the Bourne Stone's history is my family's history.

There are a great many television shows that discuss ancient artifacts and what they mean for our culture. I have to admit that after reading about the Bourne Stone and all of the experts who studied it, I am less ready to accept the succinct explanations that I see on television.

See the Bourne Stone for Yourself

The Bourne Historical Center is located at 30 Keene Street in Bourne, Massachusetts. It is only open on Monday and Tuesday mornings from 9:30 am to 2:30 pm. I would definitely call ahead, if you're traveling any distance to see the Bourne Stone. Sometimes small museums close without warning for the day.

There are usually several other interesting displays as well as the Bourne Stone. The day I took these photos, I also spent a few hours looking at handmade quilts.

Fascinating article. I had never heard of the Bourne Stone prior to this article.

An important point is that western Europeans were in contact with America long before Columbus. As you say, the Norse knew of America, and so did the Basques, who were fishing the Grand Banks off Newfoundland for generations. Rumours of a large land in the West were circulating in Europe for years, though Columbus did not realize that it extended as far south as it does. Thus Amerindian cultures would have had contact with Europeans and their cultures for many years before Columbus, and may have become aware of writing. This might have stimulated them to produce glyphs of their own.

Fascinating! Thanks for sharing about the mystery of this stone. 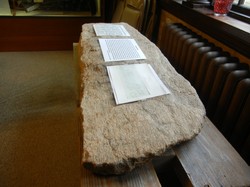 Native American legends, satanic cults and even an organized crime connection give the Freetown State Forest a reputation as the scariest haunting in Massachusetts.
37%  7   2 Nelda_Hoxie
UFOs