Nothing new to see here...move along. Once again Wayne LaPierre surprises absolutely no one by placing the blame for gun violence anywhere but the gun. Are we surprised? If so why would we be?

But there are indeed surprises. The solution it seems, is to put police officers in every one of the nearly one hundred thousand public school in the United States. That won't cost much will it. And who is supposed to pay for this protection? Why you and I of course.

This is cost-shifting gone horribly wrong.

Last Tuesday, December 18, 2012, the National Rifle Association promised "to make "meaningful contributions to ensure there is no repeat of the Newtown massacre." Like most of you I had no idea what "meaningful contributions" actually meant. At first I assumed monetarily. Maybe they were going to pay for flowers at the funerals or maybe foot the bill for a memorial for the teachers and students.

Boy was I dumb.

Here's what LaPierre had to say: "The only thing that stops a bad guy with a gun is a good guy with a gun, act immediately to appropriate whatever is necessary to put armed police officers in every single school in this nation.”

Really, he actually said this!

LaPierre went on to say that the NRA would create a “National School Shield Program" without defining what that actually meant.

Does anybody know how much it will cost to put that many police officers in schools? I have some idea as I did a little research.

Here are the figures.

As of 2010 there were 98,817 public schools in the United States. This figure has most certainly changed upward as school construction never declines but increases over time. With two additional years since those figures were released, there's no telling what the figure actually is, but is almost certain it is higher. To simplify calculations let us use the ninety eight thousand number, just so we have some basic figure to work with.

I had originally estimated an average annual salary of $50,000 for an experienced officer. Though salaries have been going down in the last year, a variety of figures are given which remarkably works out to about $51,000 annually; this is close to my original estimate. According to indeed.com, a job statistics web-site, a recruit makes $49,000 per year, an officer transferring from one municipality to another makes $68,000 per year (for the first year [must be an incentive bonus]) and a supervisor makes $60,000 per year. This does not seem quite fair (between lateral and supervisor), but I'm not going to quibble over dollars and cents. Just to make this easier let me just stick with $50,000 even though this gives Wayne LaPierre a little breathing room.

And the Figure Is...

Or Why Cost Shifting is Never Fair

And who will pay that figure? Not the NRA! Oh no dear citizen, you and I are expected to foot this bill because clearly gun violence is not the NRA's fault.

What happened to "meaningful contribution?" Oh, right, it was his speech. Stupid me!

I'm attempting to be neutral, but it's hard to do that while laughing at abserdities.

LaPierre spread the blame pretty evenly. Reporters were first targeted for glorifying the killer(s). He also blamed the media for "misinformation and dishonest thinking" which put bumps in the road toward meaningful and sincere conversation. He went so far as to imply this bias will be responsible for a new round of gun violence that is "only a cycle away."

He also suggested a mental health registry (I just suggest better services), but no gun registry. Privacy issues be damned unless you own a fire-arm.

This was followed by the ever popular blame on violent movies, video games and music videos*.

Gun safety advocates were also to blame for exploiting these tragedies for political gain.

LaPierre also ripped into the media for making gun owners the bad guys.

Finally, he said “add another hurricane, terrorist attack, or some other natural of man-made disaster, and you’ve got a recipe for a national nightmare of violence and victimization.”

Why does the phrase "paranoid nut" keep running through my mind? Oh well.

If  had as active imagination I could make a good living writing movie scripts.

* I'm in my sixties. Before movies, video games and music videos it was movies, television and comic books. Oh and Rock and Roll too. Can't forget rock and roll.

Is The NRA Loosing it's Credibility?

I for one would like to know that if a crazy gunman came to my child's school and began slaughtering everyone he or she saw, they wouldn't have to depend on someone getting to a phone and calling for help, which would take time to arrive - instead of having the armed officer / guard on duty take care of the situation. In fact just having armed officers at school - with every sicko out there knowing that - would most likely deter the cowards who love to kill in places where they are not in jeopardy.
As far as the expense, we already foot the bill for people who patrol our schools - in many areas of the country, as frugalrvrs has mentioned, so your cost projections would be significantly less I believe. Obama could call it a bail out of the school system, that's how he gets away with "wasting" money these days.

frugalrvers: Thanks for the comment. I don't think any of the proposed changes are workable. A ban on magazine size is not a solution. Carrying one additional twenty round magazine makes up for the loss of two thirty round magazines.

I would prefer to see a ban on all assault weapons including the AK-47, AR-15, and the like. These are military weapons meant for military use. They are not for hunting and not for personal protection unless your protection plan includes accidentally shooting your neighbors.

The M1 Garand (the world war two combat rifle), until just this year, required the buyer to purchase from the federal government and attend U.S. Army conducted training before purchase. And this is for an eight round non-automatic military rifle. The M14 has never been legal to purchase unless the buyer and seller adhere to the National Firearms Act. This act includes a $250,000 penalty and up to ten years in prison for violating the provisions of the act. One of the requirements of this act is a complete background check on the buyer conducted by the FBI. The buyer must also pre-pay for the firearm and must pay the ATF a $200 registration fee. This is hardly the requirement for an AR15.

As Michael Moore said any changes to gun law will be cosmetic at best. e.g. lipstick on a pig. He reasserted that we need a different attitude in this country about firearms, because nothing else is really going to make a difference.

I was born in 1968 - and in the 70s, when my dad was a young Chicago cop, they were already putting police in inner-city schools (my dad included) due to the dangers teachers/students were in daily by way of gang violence. I never thought to question if it was still going on today...but violence in schools (not mass shootings, but violence nonetheless) has been going on a long time - so I don't believe the concept of arming schools is incredibly new. My dad's main duty was not 40 hours/week at the school, either. I'm questioning if the "thought" is rotating officers in, in some circumstances? Don't know, just putting it out there.

I'm not an NRA member, my father has been as long as I can remember (he is 67). To be honest, I see foolishness and hypocrisy in both sides of the argument - too black and white thinking for any resolution.

I think our society is quite sick in many, many ways - I guess if forced to go black or white, I would say I don't blame the bomb, gun, knife, biological weapons or poison (I was in Chicago during the Tylenol murders) for the destruction caused, but the members of our angry, violent world who will find whatever means necessary to carry out their destruction. That said, I don't blame the violent video games or music either for MAKING someone become violent - instead I see it as a sad sign of the times that people are drawn to such negativity.

My daughter just graduated high school and she said it is such a dark, sad place to be - that she is happy to be out of there. Sad, stressed parents - sad, stressed youth.

Trying to find the "thing" to blame, in my opinion, is missing the big picture - like putting bandaids on the small leaks in the dam, without acknowledging the enormous wall of water and pressure that lies behind the structure.

Thanks for posting an article that gets the brain thinking - love reading them, whether I agree or not! Take care....

Thanks HollieT. It's true the NRA has had a stake in this game for quite some time. I'm trying to concentrate on the absurdity of the costs involved. That and the unfairness of "cost-shifting" which the right usually recognizes. Bet they won't this time though.

Nice to see you here, Liam!

I've answered yes in the poll, La Pierre finally went too far, however I have to add that had you asked if he and the NRA went too far a number of years ago- that's a box I'd have ticked. Interestingly, I'm watching a clip on Sky News right at this moment and the NRA's proposal to ensure that an armed guard is on duty in every school- it appears that profits could be in the making! I'm also seeing on the news that protesters are being dragged from the premises.

I'm sure I'll have plenty more to say about this when my ban from the HP forums has been lifted. Did I mention that I'm currently writing an article about censorship. :)

Looking at all three of the phenomena in as unbiased way as I can muster. Th...

Looking at all three of the phenomena in as unbiased way as I can muster. This will be difficult. The murder of innocents is always deeply shocking and offensive.
76%  10   7 lakeerieartists
Firearms 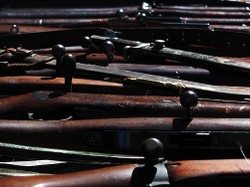 The horror of being a parent of a high school student and hearing of a local shooting.
Loading ...
Error!