When is a nickel worth six cents?

Save your nickels as an investment for the future. Nickels could be worth as much as silver coins one day.

Today, and every day in fact

Every time the US mint produces a nickel, they lose money on the deal.  The metal composition for a nickel is 75% copper and 25% nickel.

Their loss is your gain. Every time you save a nickel, you are making an instant profit. In effect, you are purchasing six cents of metal at a discount when you buy it at its five cent face value.

If you wanted to make your own nickel, you would have to purchase copper and nickel at today’s current spot price.  By paying spot, you would have paid more than five cents to acquire the metals.

In 1982 this same exact scenario played out, but back then it was the copper value in pennies that was worth more than the face value of one cent. The US mint was losing money on every single cent they minted, so they changed the composition from copper to zinc.

Today, a copper cent from 1982 (or older) is worth 3 three cents in copper value.

If we go further back in time, we will also see that this happened in 1964. In that year, the US government decided that quarters, half dollars, and dimes were going to be made out of a copper and nickel alloy. All dimes, quarters and 50 cent pieces prior to 1965 were made out of silver.

Now before you get any great ideas you need to know that it is illegal to smelt US coins. You won’t be able to melt those cooper pennies and nickels just yet. However, it is legal to melt silver coins.

The moral of this story is: you should be saving your nickels.

Just imagine if you father or grandfather had saved a few coffee cans full of silver quarters and dimes in 1964 - today they would be worth tens of thousands of dollars.

One day, your grandkids might say the same thing about nickels.

“I wish grandpa and grandma had saved some nickel copper five cent coins”.

How to save money and plan for retirement.

Living Frugally: Tips On How To Save Money Each Month

Find out the top 9 tips for saving money each month. 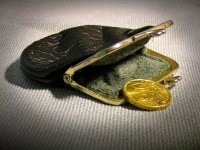 Living Frugally: Tips On How To Save Money Each Month

Find out the top 9 tips for saving money each month.
Loading ...
Error!