Deep in the Missouri Ozarks sits a little farm that Laura Ingalls of Little House fame loved dearly. You'll fall in love with it, too, on your next vacation to Mansfield, Missouri.

I grew up watching Little House on the Prairie. I even read the books when I was a little girl.

I never knew until recently that Laura Ingalls was a real person and her books are basically an autobiography of her life during America's pioneer period.

On a recent visit to Missouri, my aunt, a Little House fan, suggested we visit Rocky Ridge Farm where Laura and Almanzo lived.

Rocky Ridge Farm is more than a home where a famous person lived, it's a window into an exciting time in America's past and gives us a glimpse into the life of one of the most interesting women in American history.

Laura Ingalls was a Real Person

Maybe I have just been living under a rock all these years and I am just now learning what everyone else has always known.

I watched Little House on the Prairie everyday after school. I even read and wrote reports on her books and it still didn't dawn on me that what I read truly happened.

Better to come to the party late than not at all I guess.

Laura Wrote All of Her Books at Rocky Ridge Farm

Laura Ingalls was born on February 7, 1867, in Pepin, Wisconsin. She moved with her parents to various places across the Midwest before finally settling in De Smet, South Dakota. It's here that she met and wed Almanzo Wilder.

In 1894 after several catastrophes, including their home being destroyed by fire, the Wilders moved to Mansfield, Missouri. With $100 that they had saved and hidden during the six-week journey from South Dakota to Missouri, they purchased what would be Rocky Ridge Farm.

Where is Laura Ingalls Wilder's Home?

Just Outside of Mansfield Missouri

Not Your Typical Tourist Attraction

Being from Florida, I abhor anything touristy. When I visit someplace historical, I don't want to see glorified history displayed in a blatant attempt to get my money.

As a history buff, I want to see things as they were, learn how people truly lived, sort of a step back in time.

This is what Rocky Ridge Farm is like and I love it.

The house has been carefully cared for. It's as if Laura could walk in at any moment. It looks that lived in.

The house was built entirely by Almanzo with materials that all came from the farm. For instance, the construction of the chimney took 40 wagonfuls of rocks gathered from around the farm.

Laura was a very petite woman, only 4'11", and Almanzo made the house to fit her. All of the cabinets in the kitchen are low. He even made furniture to fit her small frame.

The furnishings are all original and all in excellent condition. Unfortunately you'll have to visit the farm to view them, as indoor photography is not allowed at the site.

Gifts for Little House on the Prairie Fans

Also included in the tour is Laura and Almanzo's rock house. Rose built this for her aging parents to give them a home with the modern conveniences of the day.

The Rock House, as Laura termed it, is located just down the road from Rocky Ridge Farm. Although beautiful, Laura and Almanzo longed for their little farmhouse and lived only eight years here before they moved back "home".

The Rock House has only recently been added to the tour. The Wilders sold it shortly after they moved out, and it has changed hands several times through the years. The Laura Ingalls Wilder Home Association was finally able to purchase it, and after seven years of restoration, it's now included in the price of admission.

This home doesn't have as much furnishings as the Rocky Ridge house and doesn't looked lived in at all. It looks as if they are still in the process of returning it to its original state. It's still beautiful and worth the small drive from the farm to see it.

Perhaps the most interesting bit of information I learned while touring this house is the fact that it was a Sears house kit. I've seen pictures of kit homes, but I've never actually been inside one. I wish they were still sold. The Rock House is beautiful, functional, and surprisingly modern.

The tour guide told us there were several outbuildings that used to be located in the pasture below the house. Almanzo still wanted to do farm work, even though he was 75 years old, and so he took up goats.

The story is that everyday he would walk to the pen, milk the goats, carry the milk bucket in one hand, his cane in the other, and walk up the hill to the springhouse where the milk would be stored.

When I visited, there was a groundhog that was down by the creek. I'm from Florida, and the only groundhog I've ever seen is Punxsutawney Phil on television. I wanted a picture, so down the hill I went.

All I can say is that Almanzo must have been in good shape for 75. I was out of breath climbing that hill back up to the house and I was carrying only a camera!

A Brief Tour of Rocky Ridge Farm and the Rock House

Home of Personal Items of the Ingalls and Wilder Families 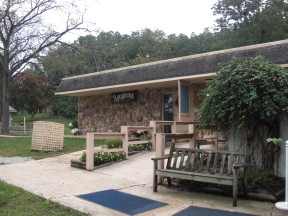 Next to the Rocky Ridge Farm house is a museum dedicated to Laura and her daughter.

This museum houses artifacts that are over 150 years old.

It starts out by giving the history of Laura's parents and has several items and furniture that belonged to them.

There are pictures of each member of Laura's family. From Ma and Pa, Mary, Carrie, and Grace, to other family members you haven't been introduced to, you can see what Laura's family was like.

In a special protected case in the middle of the museum is Pa's fiddle. On special occasions the fiddle is actually taken out and played. It's a wonder to be able to hear the same fiddle that Laura listened to in places such as Plum Creek and Walnut Grove.

On display are letters to and from various family members. You can read about Laura's sister, Mary, (who never married) in a letter from Grace to Laura about Mary's final days. So sad and poignant.

Laura's daughter, Rose, was also a author. There are many of Rose's personal belongings on display, as well as souvenirs from her travels around the world.

One thought that struck me while visiting this museum is how personal some of the items are in the museum: a glove, shoes, clothing, little notes tucked in books. These were items owned, worn, and used by everyday people just like you and I. What would it be like to know that 150 years after you wore something that 300,000 people a year were paying money to see it!

Visit their website for admission prices and hours of operation.

Plan Your Trip to Mansfield, Missouri

Rocky Ridge Farm is located about 45 miles east of Springfield, and about 75 miles northeast of Branson.

The museum and farm are open from March 1 to November 15. There are special events during Christmas. Check their website to find out more details.

My aunt has been to their Christmas celebrations, and I think that it might be the best time to visit. The house tours are free of charge and they are decorated as how a home would be for Christmas at the turn of the 20th century. The refreshments served are actually made from Laura's own recipe collection.

Also in September the farm hosts what is called "Wilder Days". Every year a different character from the television show speaks and is available for autographs. It is during this event that Pa's fiddle is played for everyone to enjoy.

Tour Mills of the Ozarks - A complete guide to mills in the south central Missouri Ozark region.

After visiting here, I want to go see the other places she lived, too. She told some very fascinating stories.

Now, that is a tour my husband and I have often talked about undertaking, the Laura Ingalls Wilder Trail. We both read and re-read the series as kids. I seriously think this could be a 'big anniversary' trip or something similar, but we will be following it as soon as we can.

Thank you for stopping by!

Little House on the Prairie was such a nice, clean edifying TV show. Thanks for sharing some of the history behind it.

Thank you! It's very relaxing

This looks like amazing place to visit. You can feel the history behind the walls... Great photos!

In your travels across the Ozarks, be sure to stop at Henson's. Located in Ch... 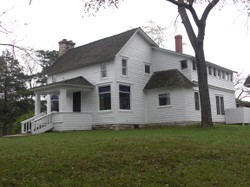 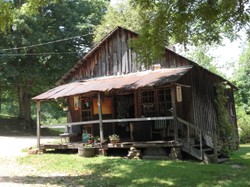 In your travels across the Ozarks, be sure to stop at Henson's. Located in Champion Missouri, near Ava, Henson's General Store is truly a step back in time.
100%  15   11 AbbyFitz
Landscape Photography