Most of us learned in school that the Chinese invented paper, but did you know that other cultures did as well? And they did so completely of China.

When other cultures invented paper they had no knowledge of paper production in China. So paper has been produced in a wide variety of places by very different cultures. The one thing they all shared in common though was the need to record information on a cheap easy to make medium.

Regardless of where it was used paper was always made of plant fibers.

As stated above paper is typically plant material, usually pulped plant material, which is pressed into a flat sheet and dried. There are many materials paper can be made from as well as many ways to make paper.

Modern paper is generally thought to be a Chinese invention of the second century C.E. The current line of thought is that the Chinese invented paper to replace the silk they'd been using to write on since silk was a valuable trade item.

But the truth is paper, in some form of pressed plant material, was around long before the Chinese invented their version. 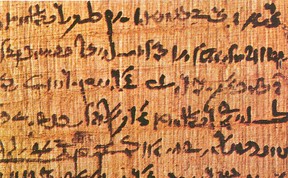 Some forms of pressed plant material predate modern paper by thousands of years. In Egypt during the first dynasty paper was made from the papyrus plant around 3,000 B.C.E. This plant is a reed that grows (or grew) along the Nile river and the Mediterranean. This plant was also used by the Egyptians to fashion boats, mattresses, mats, sandals, rope and baskets.

Only the inner bark of the plant is used to make paper. This "bark" is called pith and it was typically mashed flat, cut into thin strips and the strips placed on a hard surface, overlapping, to dry. Once dried another layer of pith was applied but at right angles to the first.

During this second stage of production, the addition of a layer of papyrus at right angles, the paper might be pounded with a flat object and then pressed together between two flat surfaces to dry. Finally the papyrus, once dry, would be polished with a flat stone or seashell to give it a smooth writing surface.

Though this is a lot of hand work, all this preparation was still cheaper and easier to produce than velum (animal skin) or parchment (another name for velum), though both of these materials are much more durable. Finally, the climate in Egypt makes this form of paper very durable and long lasting. 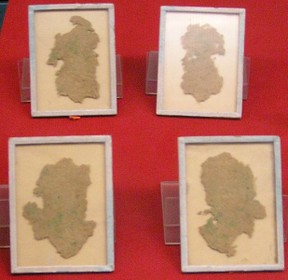 China's version of paper from wood pulp was invented by Cai Lun in 105 AD. His methods made it possible to create paper from tree bark, hemp fiber, and cloth rags.

The earliest Chinese paper has been traced to the Western Han culture between 206 B.C.E. and 24 A.D. This paper was made from hemp.

Another form of paper made from bamboo was produced by during the Hang Dynasty around 608 to 907 C.E.

Though modern paper today is made from wood pulp, the Chinese favored other fibers since they proved much stronger fiber and long lasting. The key was to give a fine writing surface once dried. Since paper was used almost exclusively for record keeping under orders by a monarch, it was vital that the paper wear well and last a long time.

For comparison modern paper, like that made in the United States, is really not suitable for writing until it has a fine layer of clay or potato starch applied to make it a good writing surface. Chinese paper avoided this step by using better materials to start with.

The Chinese lost a battle in 751 CE, in Turkestan on the banks of the Tharaz River and the victorious Arabs captured Chinese artisans, some of whom were paper makers. Arabian paper soon became known for it's thickness and glossy surface. A paper far superior to the Chinese paper that had been traded along the silk road up to that time.

Analysis of paper from Baghdad reveals that it's primarily linen and sometimes flax. This was due primarily to the abundance of either growing along the banks of the Tharaz River used for paper manufacture; wherever that manufacture took place. Analysis also reveals that cotton, if used at all, was used sparingly.

The Aztec/Maya also made paper for the administrative purposes. They used the bark of a fig tree pounded to a pulp and then prepared in a manner similar to Chinese paper. The resulting paper was used to record astronomical observations, taxes, history, and communicate orders from the capital to outlying areas. The paper was also used to make maps and record land ownership and boundaries. Paper was used so extensively in the empire that Montezuma is said to have built a library and charged a custodian (librarian) with the safekeeping of records.

Despite the fact that the paper was much more durable than papyrus a great deal of it rotted away or was destroyed by Spanish missionaries during attempts to convert the people to Christianity.

"We found a large number of books in these characters and, as they contained nothing in which were not to be seen as superstition and lies of the devil, we burned them all, which they (the Maya) regretted to an amazing degree, and which caused them much affliction." - Bishop Diego de Landa in July of 1562

Just as the ancient Egyptians did, the Mayan/Aztec paper-makers also used skins to make velum or parchment. Theirs was usually deer-skin however.

Early colonial American paper was produced much like Chinese paper, but with a mixture of linen and hemp pulp rather than one type of fiber. The first American paper mill was established in 1690 by William Rittenhouse and William Bradford in Wissahickon Creek which is near present day Philadelphia. Up to this time almost all paper was made, not from woody plant fiber, but from discarded linen rag; clothing.

During the revolutionary war paper became an even more important commodity since by that time most paper was imported from England. Britain had also imposed a tax on paper goods, so the revolutionary colonies needed a means to produce their own paper. Interestingly raw materials and factories to produce paper weren't the most important consideration. It was the wire forms to form the paper upon that were a key element in production.

Nathan Sellers of Pennsylvania was possibly the best wire craftsman in the colonies. He supplied paper molds to hundreds of factories in the colonies. When Sellers joined the revolutionary army in 1776 he was soon discharged by a special resolution of the Continental Congress. His skills as a mold maker were far more important to the colonies than his contribution as a soldier.

Newspaper printers and paper-makers of the early eighteenth century often appealed to their readership to donate or sell used linen rag for paper production.

Paper has been a recycled product since colonial times at the very least.

Modern paper recycling means that one ton of recycled paper, on average, saves two tons of wood from harvesting.

This translates roughly to seventeen (17) trees from begin felled for every ton of paper that is recycled.

The Declaration of Independence, Constitution, and Bill of Rights are all written on velum; not hemp paper. Hemp paper was likely used to draft these documents; not for the final copy.

Laid paper has evenly space horizontal lines running through it. These lines are produced by the type of wire screen that the paper pulp was drained onto. The lines were given greater definition when a roller was applied to squeeze out excess water.

During the second World War extra fuel tanks for aircraft (called drop tanks) were often made of paper impregnated with plastic.

World wide about three hundred million tons of paper are used per year.

About one hundred sixty million tons of paper are recycled annually. Over half of that used.

You are right - of course papyrus was the first paper. So credit to the ancient Egyptians. 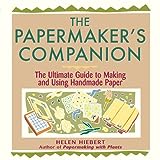 The Papermaker's Companion: The Ultimate Guide to Making and U...
79%  10   7 pateluday
Materials & Industrial Technology

Iron has been in use since prehistoric times dating back to 4000 BCE. That is the period when artifacts were made of meteoric iron in absence of the mining and smelting process.
47%  2   6 pateluday
Materials & Industrial Technology