Who is Skylar Spring?

So you wanna know more about me? Really? ...Okay, here we go

Let's Start With The Basics...

By now, assuming you've read my blog, or at least one of my social networking profiles (facebook, twitter or myspace), you have come to find that my name is Skylar Spring, I am 21 years old and am studying writing with the Long Ridge Writers Group. I am a married woman and a mother-to-be, living in New York City (for now). I'm sure you've noticed that I love to write, especially when it comes to fiction. When it comes to my articles I like to write on a wide range of topics; from pregnancy to writing tips and from history to mythology. I have a thirst for knowledge which Is close to impossible to quench. I am by no means an expert in anything, I am just passionate about the things that I enjoy and that interest me.

Great! Now that that's out of the way, let's get detailed...

A Brief History of Me...

Let's see if I can sum up 21 years in a nutshell. I was born in Brooklyn, NY on February the 26th, 1990 to AnnMarie and Kenneth Kominski. I have an older sister, named Melissa, who I am now very close to. When I was two, I was diagnosed with a disease called Juvenile Rheumatoid Arthritis (JRA - Now known as Juvenile Idiopathic Arthritis JIA). No it's not the child's for of Rheumatoid Arthritis though they do share some similarities (I'll eventually be writing a post on JRA, so keep an eye out). I was put into a rehabilitation center in Valhalla, NY, called Blythedale Children's Hospital,  to learn how to walk for five months. I walked out of there with no more than a limp which disappeared when I was put on a medication called Methotrexate. When I was four I was diagnosed with a condition in my eyes called Uveitis, which was caused by the JRA. Being a lucky little girl, I had the rarest form of both diseases. After so many surgeries done by a man who knew nothing of my disease, on my eyes, my left eye eventually hemriged and left me with a scarred over cornea and my right eye had limited vision. I am now happy to say I have a wonderful doctor who is hopeful for my eyes, though I will never have 20/20 again (unless some miracle treatment comes out). I've had two corrective jaw surgeries at age fifteen and age seventeen, because I had an under developed jaw thanks to my friend JRA. Despite the medical stuff and disability my childhood had it's happy times, especially when I was with my family.

For most of elementary school I was homeschooled because of my disability. New York State gave me a hard time and I couldn't get into a "Special Education" class (I hate that term "Special Education"). I had a great home instructor though, who found a school for the disabled in the Bronx called The New York Institute for Special Education (Again with the special ed. Plus the word institute in association with the disabled is a bad word choice). I was above average when I began at NYISE, when I was ten. I attended the school for eight years. I combined two years of high school and graduated a year earlier than I was meant to. Despite the bad choice in name, I loved the school. The people there drove me nuts so naturally, they were like my second family. Unlike "regular" schools, I was accepted there. I had friends, I was social, I went to prom... basically, I got to do all the things that "normal" kids do. I learned more than just academics there. I learned independence, tolerance and advocacy.

A bit about my personality as a kid. When I was really young, I was destructive and a trouble maker. So you can imagine how I drove my parents and sister crazy. Breaking dad's knick-knacks to using my sister's make-up to draw on the walls, I was a thrill to be around. I calmed down as I got older, but I was still rebellious. In high school I was very nerdy; always had my nose in a book. I was an interesting specimin as a kid.

I graduated high school in 2008 and started attending Pace University that same fall. Initially, I went into college studying Psychology. Practical career, but not my thing. I bounced from major to major at Pace. Eventually I gave up and transferred to Hunter College. There I declared a major in English. But I still wasn't sure what I wanted to do. That is until I took a creative writing course. I'd always loved writing but I never thought it could be a real lucrative career. Taking that course rekindled that old flame with writing that I once had. Of course when I went to declare a major in Creative writing, I found out that Hunter doesn't offer it. So after three years of soul searching, I'm now sure what I want to do, but I am in a school that doesn't offer it. Just my luck. We'll have to wait and see what the future holds for me. For now, I'm taking a semester off because my baby's due date is at the worst possible time during the semester. I'm enrolled in the Long Ridge Writers Group though. I'm hoping it will further my career as a writer. Eventually I'll go back to school. I was considering going back this spring, but it's up in the air right now.

So that was academics, but there's also the social aspect of college to consider. Well let me sum it up I'm hardly social in college unless I'm in a writing course. I'm a shy wall flower type. But among other writers, I blossom into much more.

My Fairytale - Yes They Exist!

As the header suggests, I do have my own little fairytale. I know surprising considering all the bad that has happened in my life. I guess I am lucky after all. Mine and my husband's story is a unique one. If I were to tell you without telling you it's about us, you wouldn't believe it unless you're a hopeless romantic.

See I never much believed in love. I'd kind of given up on it. Seemed too far-fetched to me. But then in November, 2010 I met the man that would be my husband, in the most unusual way. I met him on a virtual world called Second Life. I was of course suspicious of him in the beginning, as he was of me. We'd traded pictures and agreed that we both thought the other was "hot". I'd talk to him almost everyday on second life until one day he asked if we could voice chat. Well I was nervous but i said yes. But of course, my second life voice chat wasn't working. So I asked if we could skype. At the time I didn't know he hadn't had one. I found out later he created an account as soon as I asked if he had one. At first I wouldn't call him with video. We chatted for about an hour, just on voice. But then he asked if we could video chat. Terrified I said yes. I'm a tad self conscious. We ended up chatting on video chat for about four hours. I felt like I'd known him for years. It was an instant connection. Love at first sight you could say.

We chatted every single day; on skype, on facebook, on second life, etc. Finally we decided to meet. Here's where it gets complicated. My husband was an englishman living in France. But that wouldn't stop him. He came to the states in February 2011 and he hasn't left yet hehe. We got married in May after I'd found out I was pregnant. We have strong morals and wanted to be married before the baby was born. This wasn't a tough decision though. We'd already decided we wanted to get married one day, it just happened sooner than planned. I love him dearly and we are practically inseparable with the exception of school and work.

Currently we are planning for our baby who will be born in December. We are quite excited!

What Else Am I Currently Up To?

Well currently, I'm trying to break into the freelance writing world. I write for hubpages and I just started writing for Xomba. I've got this blog and two other going, more or less for the practice rather than for money or experience. I'm also trying to get into an online writing program to improve on my skills.

Apart from working on my writing, I'm just trying to get through this pregnancy and spending time with my husband and trying to help him find work. He too writes for hubpages, but he's looking for an actual paying job hehe. I'm attempting to plan out my future but that's harder than it looks. Not much else is happening for me presently. I wish my life was a bit more interesting

Some of My Favorite Articles That I've Written

WOW! You've actually read my blogger biography blog all the way through!

I am thrilled about that. I hope you enjoyed it and I'm grateful you've read this far.

If you liked this, you should consider reading some of my other works on the internet.

There's not many now, but give me time! There will be!

Anyway, thanks again for reading!

You have such a pretty name and very interesting life for such a young person. Nice to meet you!

what an interesting life....good to meet you! 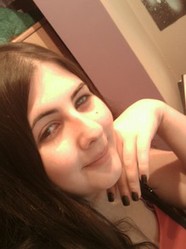