An attempt at understanding how exotic spiders unwillingly got the lead role in a big picture conversation between environment and business.

In case you haven't heard about this yet, because you don't follow mediocre news, have a life or simply don't eat fruit because you're insane, it's been going on for a while.
Spiders that come with a discount when you buy grapes and bananas from the local supermarket. Uninvited guests, who are surely just as discontent with the encounter as you are.

First in the US they found a black widow spider in a box of red grapes, more than on one occasion.
An even worse situation occurred in the UK, when a family had to evacuate from their home. They found a Brazilian wandering spider, packed away with a bunch of bananas, which alarmed the London pest control. The same Brazilian spider that is classified by Guiness Book of Records as the world's most venomous spider. Also, it's known for giving human males the most horribly long-lasting painful erection possible, which is not as fun as it sounds.

What does it mean when you find an extremely dangerous exotic spider with your fruit?

A) You have been condemned by the Universe and it's going to send unexpected life-threatening situations your way until you eventually go insane.
B) Farmers are mindfully letting the spiders live in their plantation because they serve a purpose.
C) You are destined to become the crime fighting superhero Spiderman. Also your uncle's going to die.
D) Spiders live to freak people out.

While the last one is quite probable and explains a lot, it's actually B), as you already figured out.

It's not a conspiracy, it's rather a big plot hole in a (not so) well thought-out plan.

To understand the situation, we must first revisit a few basic facts, that really tie the whole image together:

With all this said, it must be clear to you already what is happening.
Farmers are putting big predator spiders into their fields to manage the population of pests, therefore increase food quality, in an environmentally-conscious way.
However, not everything follows the “What happens in Vegas, stays in Vegas” rule, and naturally spiders end up getting transported alongside the fruit into grocery shops and.. people's homes. That is the big hole in the system.

What's unfortunate is how much attention is given to the danger-factor, instead of to the story behind it.

The companies are doing their best to keep the spiders in the fields, of course, but it's hard to have it both ways. It might sound like a shrug-off, an “It is what it is” sort of reaction to people's complaints, but it's actually the better solution.

The truth is, people are getting revved up about it because a spider is something solid, something you can put your hand around (don't), and your brain automatically classifies as a danger to your well-being.

On the other hand, the infinite amount of damage done by the use of pesticides in your food is not something you consider in your everyday life, as it's not an immediate threat.
Even in a worse case scenario, these spiders can never be even half as much trouble compared to the impact these sprays have on the air, water, soil, plants, animals and humans (birth defects, genetic changes, tumours, nerve disorders..let's not go on).

On a final note, spiders are a good thing, but it's hard to see that when it's staring you in the face.

The best thing to do is to know how to act in an eventual encounter:

Keep in mind that even in the case of the Brazilian wandering spider, despite its bad reputation, bites are rare (spiders usually go after things their own size and attack only when cornered), easily treated and non-lethal (because there is rarely enough venom in the bite to cause serious damage).

If there is one thought that we would like to leave you with, it's this old cliché:
The ends justify the means. 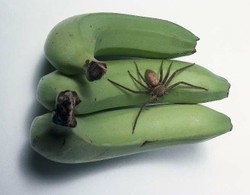 Many years ago, I went on a quest to find the best edible landscaping for Florida. My search brought me to face-to-face with the Moringa tree, and I have loved it, ever since.
88%  4   5 cazort
Perennials