Trees may colonize areas near or far through wind dispersal of seeds. An arboreal sprout blown by winds far from its kin may be a pioneer in a new locale.

Wind dispersal is one way in which seeds are sown.

Oftentimes wind-sown seeds, having landed and taken root at a considerable distance from their parent plant, are the only examples of their kind in their new home.

Seeds are the reproductive products of plants. As such, they carry the promise of their parent plants’ survival within them. Plants sow their seeds in a variety of ways, primarily through dispersal vectors, which biologically refers to agents that disperse, or transport, seeds. These agents may be culled from living components, such as animals (biotic) or non-living environmental components, such as wind (abiotic). Seeds that are transported by the wind are referred to as wind-dispersed seeds or as wind-sown seeds.

Some seeds are designed for distance dispersal. For example, each dandelion (genus Taraxacum) seed is attached to a tuft of fine feathery bristles, pappus (Greek: pappos and Latin: pappus, “old man”), that facilitates wind dispersal by acting like a parachute. Likewise, the samaras, the distinctive wing-shaped achenes (single-seeded fruits), of maples flutter and spiral in the wind like gliders and whirligigs.

The fascinating aspect of wind dispersal is that plants and trees oftentimes are deposited away from the vicinity of their parents and thus are surprise, hopefully welcome, residents of their new home.

Three saplings, clearly dispersed by the wind, have staked their claims over the past nine years to three different patches of my yard. These unexpected guests, with long-term intentions, consist of an Eastern red cedar, a black locust, and a silk tree.

Silk trees are in the genus Albizia, which includes about 150 species of generally fast-growing trees and shrubs. Albizia is described as a pantropical (“across the tropics”) genus because it is found in the tropical regions of all major continents: Asia, Africa, Australia, North and South America. Albizia julibrissin has become naturalized (introduced deliberately or accidentally outside its native range) in the United States, where it is regarded as an invasive species, i.e., a non-native dominant species that is disruptive to its new habitat.

Silk trees are sometimes erroneously called mimosas, which belong to a related genus, Mimosa, in the same subfamily, Mimosoideae,

Other common names for silk trees include albizzia, Persian silk tree, and siris. Although the genus name is spelled with one “z,” its common equivalent retains the doubled “z” of its namesake, Filippo degli Albizzi, an eighteenth century Italian naturalist and nobleman who introduced the species (Latin: Albizia julibrissin) into western Europe when he brought its seeds from Constantinople to Florence (Firenze) in 1749.

Silk tree's flat crown and spreading branches create a large natural umbrella from the sun that is enjoyed by all creatures from butterflies to elephants. Silk trees are not content, however, to be just shady, ornamental stopovers. For instance, medicinal remedies have been derived from their parts throughout Africa:

In 2005 an albizzia sapling emerged comfortably in the midst of the lavender and yellow irises (Iris virginica) on the terrace that hugs the northwestern corner of my house. It is a small terrace, which is actually split asymmetrically by a flight of rarely used stone steps. The silk tree settled in the smaller section, which is shaded by an old boxelder (Acer negundo) with rambling, extensive branches that stretch above the southern third of the split terrace from its roost on the ground below in front of the rough-hewn log fence that separates the western lawn from the encroaching field.

Across the steps from the silk tree, on the remaining two-thirds of the northwest terrace, is an Irish yew (Taxus baccata ‘Fastigiata’), its upright posture never contorted by the winds that bluster from across the open field to the west. At its feet arises a sea of American tiger lilies (Lilium superbum), their warm orange tepals in harmonious contrast to the yew’s dark green foliage.

Robinia pseudoacacia is commonly called black locust. On rare occasions it is called false acacia, a translation of its species name, pseudoacacia. Black locusts are native to the southeastern United States, ranging from Pennsylvania down through West Virginia, Virginia, northeastern Kentucky and Tennessee, South Carolina, and into northern Georgia and Alabama.

Black locusts also have been naturalized in temperate areas of North America as well as in Europe, southern Africa, and Asia.

Some places regard black locust as an invasive species.

Black locust is considered a major honey plant in France and in the eastern United States, where, despite its short blooming period of about ten days, its feral -- rather than cultivated -- availability provides 800 to 1200 pounds of monofloral honey in a short bloom period. Monofloral honey is valued for the distinctive flavor which is produced by its originating from the nectar of one plant species.

Acacia honey may appear anywhere from light yellow in color to almost colorless.

Black locusts are not intimidated by poor soils because their root systems contain nitrogen-fixing bacteria that enrich the soil for them.

Although black locusts exhibit quick, vigorous growth as saplings, their lifespan is oftentimes brought to a crippled end by locust borers (Megacyllene robiniae), which are regularly mistaken for wasps or bees.

In 2005 a black locust sapling quietly began growing on the southeastern terrace. To its north is a well-establish European yew (Taxus baccata), whose twin prospers a few feet away, just across the eastern terrace’s steps. Its southern neighbor is a slightly gnarly eastern red cedar (Juniperus virginiana), with branches proudly and persistently flourishing around a mysteriously decapitated crown.

The sapling is a little west and north of center on this terrace, which means that it is taking on the elements on its terms. Windy growls, heavy downpours, blizzardy blasts, intense heat waves -- no matter the weather, that adorable black locust sapling endures. I have to love it for its plucky stamina and its youthful sleekness.

Juniperus virginiana is generally considered to grow slowly and, with a potential lifespan of two centuries, to be long-lived. Thus, they could be equated with the Aldabra giant tortoise (Aldabrachelys gigantean), with its slow progress through its presumably 200 year life. Its reddish brown bark peels off in thin strips. Eastern red cedar is classed as a pioneer invader because of its ready repopulation of disrupted land. With its sturdy determination to establish new growth, it is regarded aplenty as an invasive species, despite its native status. Touchingly, Eastern red cedar quickly immolates during wildfires. So this intolerance was regularly used to contain its growth.

Juniperus virginiana log: sawn in two and turned on a lathe to expose pale sapwood and reddish heartwood

Nine years ago a scraggly tuft of Eastern red cedar wearily leaned its newborn crown against the rough-hewn edges of the post that marked the southern segment of the western lawn’s log fence. The soil there is infiltrated with toxic, growth-stunting juglone, an allelopathic compound secreted by the proximitous black walnut tree (Juglans nigra) that discourages most plant growth. On the other hand, less than a foot away to the north is the external laundry drainpipe, which has created a stable watershed that is regularly replenished. Needless to say, the periodic water drenchings have worked wonders for that red cedar neonate, which now stands about five feet tall.

My three wind-sown trees -- silk tree, black locust, and Eastern red cedar -- contentedly inhabit my yard. They were flown by the wind here, and their flight ended here. The wind had three separate travelers, and somehow all three settled in their respectively perfect homesteads. They clearly are here to stay, and they are most decidedly welcome here.

Native to southeastern United States, black locusts have become naturalized throughout the temperate regions of the world:

The tree this honey comes from grows up to 25 meters and bears luscious nectar, which the bees transform into honey that is known to be a yellowish, light-colored taste experience.

A Wall Hanging of Red Silk, Embroidered with a Tree of Life in Gilt Thread and Silks:

Mira, Your appreciation of nature is greatly appreciated. :-)
All three of these trees are beautiful, so I am happy to share them. I love the aesthetics and wisdom with which they placed themselves in my yard.
Best wishes in locating black locusts: they are there, awaiting discovery by you.

I've never noticed black locust around here, but I will look for it. Its flowers are rather pretty! I know albizzia (great to know the details on its name, with the single and double z), but didn't know it was called silk tree as well. Also didn't know about red cedar. That Juniper virginiana is what I know as juniper, and the only juniper I know.
It's really wonderful to learn about nature from you. Thank you for sharing all this with us. 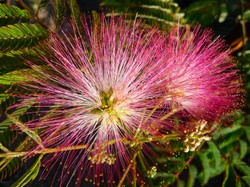 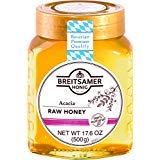 New World native Eastern redbud is one of the first trees to flower in spring.
100%  14   13 DerdriuMarriner
Trees 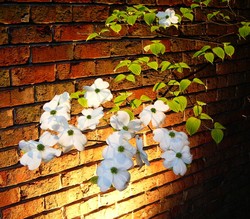