"Bog Mummies, Preserved in Peat" spotlights for young readers the natural preservation of mummies by the interplay of cold water, moisture-absorbing moss, and time.

The word bog calls forth images of moisture, moss and peat. Since the mid-twentieth century, it also inspires thoughts of mummies.

The book "Bog Mummies: Preserved in Peat" tells the story of people preserved for hundreds or thousands of years in Europe’s peat bogs. It is one of four books in a mummy series published by Capstone High-Interest Books in 2003.

Bog Mummies: Preserved in Peat sensitively discusses a delicate topic for young readers aged 8+, in third grade and up.

Decomposition naturally begins when life ends. It continues until all internal organs, skin and tissue decay and only bones remain. But decomposition does not move uninterruptedly from beginning to end.

Bacteria and fungi break down lifeless organs, skin and tissue. But obstructions can affect decomposers carrying out their responsibilities. Human intervention or natural forces may obstruct decay.

Bog mummification happens when people fall -- accidentally or deliberately -- into almost-freezing water. Decayed matter has to be on the pond’s or pool’s bottom. Sphagnum moss must be on the water’s surface.

Europe’s bogs in Denmark, England, Germany, Holland, and Ireland are precious resources. Peat rarely is cut manually nowadays. Peat-cutting machinery puts workers too high up to distinguish mummies from peat. Ironically, therefore, other mummies most likely will stay where their cultures intended them: in bogs to appease spirit worlds or to pay for crimes.

Bog Mummies ends with a glossary and an index. It includes recommended reading and resources to visit in the world and on the internet. It is an informative, interesting book for young readers who understand the cycle of birth, maturity, and death.

My special thanks to talented photographers and concerned organizations who make their fine images available on the internet.

Young Readers Book Review of The Royal Mummies: Remains From A... 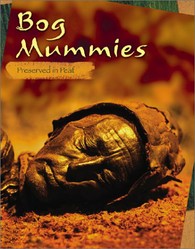