The African American cultural manifestation usually is described as a unique martial art that combines and hones the skills of acrobats, athletes, dancers, and game-players.

Jane Atwood situates the distinct martial art within its modern African American and historic African Brazilian expressions in her “Capoeira: a martial art and a cultural tradition” contribution to Rosen Publishing Group’s Library of African American Arts and Culture series.

artistry and athleticism of capoeira

Capoeira: a martial art and a cultural tradition is a logically organized and nicely illustrated book for young readers aged 12+, in the seventh grade and up.

Capoeira demands reflexes and wits. It is an ancient activity in Brazil. It is recognized as a new activity worldwide, particularly in the United States of America.

Capoeira’s original and present manifestations are discussed in Capoeira, written by Jane Atwood and published by Rosen Publishing Group, Inc. in 1999. The book forms part of the publisher’s Library of African American Arts and Culture series. Other titles include:

The first of six chapters defines capoeira as a martial art dance-, music-, play-, and theater-like in entertainment. Capoeira imparts philosophy and self-defense. It ultimately is a life-affirming ritual whose origins are unknown.

Chapter 2 considers capoeira’s history. It is suggested that capoeira originated as an African Brazilian slave dance. Capoeira’s evolution may have been influenced by cultural memories of N’golo (Angola’s ancient puberty “dance of the zebras”) and sanga (ancient sword dance). It particularly was practiced on quilombos (communities of escaped slaves) in Brazil.

Capoeira endures despite sixteenth through twentieth-century opposition from government officials and plantation owners. It honors three practitioners, whose biographies are given in Chapter 6:

Capoeira triumphs nowadays as a Brazilian Boxing Federation-regulated sport (1972-) and an Olympic sport (2004-).

Chapters 3 and 4 explain capoeira’s musicality. Music includes participants chanting in a circle within which practitioners interact. It also involves the rhythms of the:

It signals how capoeiristas (capoeira players) move, as identified in Chapter 6:

Capoeira is a marvelously elucidating book to which readers of all ages will want permanent access, to learn and review the African American expression of African Brazil’s martial art, dance and game.

My special thanks to talented photographers and concerned organizations who make their fine images available on the internet. 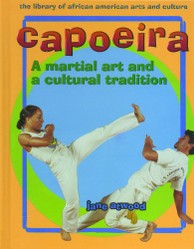 Capoeira: A Martial Art and a Cultural Tradition (The Library ...
59%  2   8 DerdriuMarriner
Children's Books 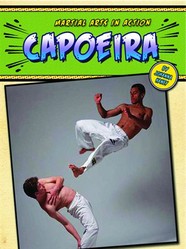