Many bridges have spanned the River Thames, but the most fascinating of all was the medieval Old London Bridge with its houses, shops and chapel.

Spanning rivers has always been of vital importance in human history. It brings communities together for trade and social interaction. It unites two areas of land that would otherwise be culturally and economically divided. Yet it can also make an area vulnerable to attack, taking away its autonomy.

Bridges are always an act of faith. Crossing them could be fraught with danger. On a bridge we are suspended between life and death, even though these thoughts might only be buried in our subconscious.

One of the most intriguing bridges spanning London's River Thames was the Old London Bridge.  Not only did people pass over it in large numbers every day, but they lived on it, traded on it and died on it.

The Old London Bridge was commissioned by Henry II to replace the previously erected timbered structure.

Work began in 1176 and this new stone bridge would take thirty-three years to complete. Like similar bridges in France and Italy (some still existing) and Newcastle-on-Tyne (now gone), structures like these, where people lived their daily lives suspended over water, held a deep fascination for the public.

There were four hundred tenants of old London Bridge who inhabited the one hundred and forty shops, houses and businesses. But the bridge did not always carry housing and upkeep of the bridge was met by tolls. However, this was an inadequate method and failed to raise the necessary funds.

It was King John (1166 – 1216), supposed enemy of the legendary Robin Hood, who decided that London Bridge should permit buildings on its structure so that the rents could pay for badly-needed upkeep and repairs.

These inhabitants were a surprisingly healthy lot compared to other Londoners. Unlike land-bound citizens, Old London Bridge tenants received lots of free-flowing air. In addition, there were no rotting sewage problems as all waste went straight into the river and was carried away.

Fire was a hazard. In 1633 forty-three houses and many shops were destroyed by fire, yet in 1666 during the Great Fire of London the bridge was scarcely damaged.

At the opposite end of the spectrum, water was obviously a hazard and drowning was common, especially amongst builders attempting to erect or repair the precariously-built houses.

There would have been plenty of social life and spectacle on Old London Bridge. It was the main gateway into London from the south and its visitors included Kings and Queens, prisoners of war, defeated armies, victorious knights, entertainers and numerous pilgrims on their way to the tomb of 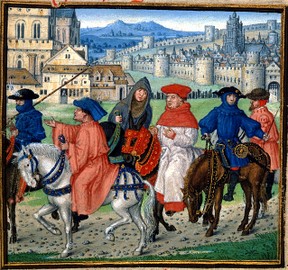 Saint Thomas a Becket in Canterbury. Like today's consumers, shopping would have been a great attraction.

There were even tournaments on the bridge, not to mention actual rebellions by disenchanted peasantry. One ghoulish aspect was the placing of heads of traitors on posts, either on the drawbridge in the middle of the bridge or on posts by the gate at the south end.

Old London Bridge had nineteen stone arches of various sizes set on timbered piers. These arches created dangerous eddies and torrents, forcing many passengers who travelled by hired boat to leave their craft with the waterman and pick up their boat further downstream. Of those who chanced their luck, many drowned in the rapids.

The bridge was 20 feet wide and 300 yards long. However, the width of the bridge included the timber-clad houses which were precariously built on props hanging over the river. These houses met overhead with adjoining rooms where servants lived and goods were stored. Therefore, despite the resulting gloom, pedestrians were protected from the weather.

The actual pedestrian walkway was a mere twelve feet across. This allowed access for people on foot or horseback or with small handcarts, but progress was slow. The bridge thoroughfare was crowded with people distracted by the shops, the teeming river and each other. There was no ‘keep left’ rule!

There was a fine chapel on Old London Bridge dedicated to the recently martyred St Thomas a Becket. At a time when walking across water was regarded with suspicion, people crossing the bridge would often step into the chapel to pray, or enter it at water level from boats.

However, when Henry VIII ordered the beheading of Thomas More, the name ‘Thomas’ rankled with him - one Thomas could be tolerated,  but two was just beyond the pale -  and the chapel became devoted to Mary rather than Thomas a Becket.

Even this change was short-lived. As the Reformation gathered speed Henry demolished the upper part of the chapel, replacing it with a secular dwelling house where eventually a printing business was established. Only the original crypt remained.

To protect the city from invasion Old London Bridge had a huge stone gate, or portcullis, on the south side as well as a drawbridge in the middle which also served to allow large ships to travel up river.

In 1577 this gate would be replaced by a  stunning  building called Nonsuch House where the Lord Mayor would reside.

Old London Bridge – The End of an Era

Eventually Old London Bridge outlived its usefulness. Times changed and when traders began using horses and large carts rather than packhorses, it became necessary to shout “Keep left!”. When private carriages became fashionable, London Bridge was too narrow to cope.

The houses were demolished and the bridge was widened by additions to either side. Two middle arches were taken away and replaced by a huge arch to allow access for larger boats. Not only was the bridge more unstable without the weight of the houses, but these new arches allowed the Thames to flow much faster. As a result, in winter the ice no longer froze and the much loved frost fairs on the frozen Thames became rare events.

This was no longer the vibrant Old London Bridge.

Pedestrians were marginalized, the houses were gone and their inhabitants disappeared into the narrow London streets. In 1831 when John Rennie's London Bridge was opened, the last remnants of Old London Bridge were removed.

Eventually even this bridge would prove incapable of coping and would be sold off to an American entrepreneur in 1967.   It was taken apart, block by block and transported to the States where it was reconstructed and is now a bridge in Lake Havasu City, Arizona.

But Old London Bridge was a real character and lives on in the collective memory of those who love London and her history.

When the chapel crypt was demolished, the bones of Peter de Colechurch, the Master Builder of Old London Bridge, were found. They were flung into the river without ceremony. His bridge had lasted six hundred years.

Note:   Why not visit The London Bridge Experience/Museum which opened in 2012 -  and find out all about Old London Bridge and lots of other fascinating facts.   Here's a link to their website.

Prints of London Bridges on E-Bay

Oh Joe, thanks chuck! I'm glad it helped to bring it alive. xx

I didn't tell you that shortly after you wrote this, I visited London. We arrived at London Bridge tube station to visit the Tower. Walking across the bridge I imagined it all as you'd described it back in the day. It really enriched the experience. Thank you!

It seems to be taking us all back to our childhoods! xx

When my eye caught a glimpse of this article I instantly thought of the childrens song, London Bridge, and had to read, so glad I did. I just had to give this a tweet.

Hi WriterArtist - I remember that nursery rhyme too...:)

I can't help remembering the poem -
"London bridge is falling down, falling down, - My fair Lady"
I used to sing this a lot when I was a kid, must be the same old bridge, hope it has not fallen down.

I just posted it on StumbleUpon. Hope some people from over there will get to read your article.

Hello Mira - It's so lovely to get feedback like this. Thank you so much. I agree with you about the book idea! :)

What a wonderful article, Kathleen!! You got me so interested in this bridge and its times. It would be fascinating to do a book-length study using literature, engravings, and so on. I will definitely visit The London Bridge Experience Museum next time I go to London. Thank you so much for sharing!

Don't be lonely in London. Make friends of all ages - people who share your h... 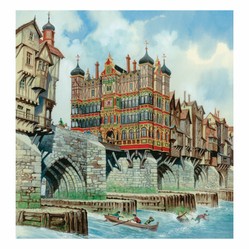 Old London Bridge: The Story of the Longest Inhabited Bridge i...
35%  2   4 KathleenDuffy
United Kingdom of Great Britain and Northern Ireland 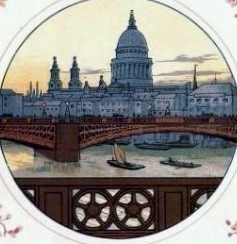 Don't be lonely in London. Make friends of all ages - people who share your hobbies and interests. Visit a Meetup Group and kickstart your life again!
100%  22   14 KathleenDuffy
United Kingdom of Great Britain and Northern Ireland