A Plot Summary of Electra by Sophocles

What is Sophocles' Electra about? And does the play have any relevance to the modern world?

"In such a state, my friends, one cannot be moderate and restrained nor pious either. Evil is all around me, evil is what I am compelled to practice." (Electra, trans. Grene, l.306-309)

Believed to have been written towards the end of Sophocles’ career (410-405 BC), Electra or Elektra proceeds the events of the Trojan war and takes place in Mycenae, in front of the palace of Pelopidae.

In a nutshell, the play is about Electra, daughter of King Agamemnon and Clytemnestra, who plots vengeance against her mother and step-father, Aegisthus, for the murder of her father.

What Happened Before the Events of The Play Electra?

Prior to the Trojan war, Agamemnon sacrifices one of his daughters, Iphigenia, in accordance with the demands of the gods.

When he returns victorious from Troy, with the Trojan Princess Cassandra as his concubine, Clytemnestra and her lover Aegisthus (Agamemnon’s cousin) murder the king, and his new paramour, at the hearth.

Clytemnestra believes the act is justified vengeance for the sacrifice of Iphigenia.

But, Electra's not sure that's true. Believing that her mother is merely power-hungry, young Electra sends her twin brother, Orestes, who is also the rightful heir, to Strophius of Phocis, where he will be safe from the clutches of Clytemnestra.

Summary of Electra by Sophocles

The play begins several years later. Now an adult, Orestes returns to Mycenae and plans revenge against his mother and step-father. 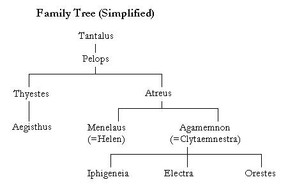 Accompanied by Pylades, who is the son of Strophius, and a pedagogue (teacher), Orestes asks the pedagogue to go into the city and announce that there has been a horrific chariot accident, in which Orestes was killed.

The audience or reader first encounters Electra as she laments over the death of her father. She is eventually joined in her grief by the chorus (women of Mycenae). She engages in an argument with her sister, Chrysothemis, over her close bond with their mother and Aegisthus.

Then, she confronts Clytemnestra about the murder of her father.

Shortly afterwards, a messenger arrives with the report of Orestes death. Electra is distraught by the news, but Clytemnestra is relieved by her son’s demise. However, Chrysothemis has just been to Agamemnon’s tomb and found offerings lain there. 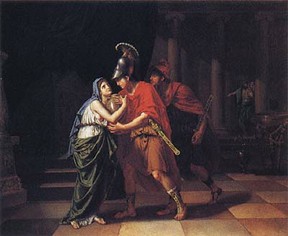 She surmises that these must have been left by Orestes and tells Electra that she believes their brother is still alive.

Electra rejects her sister’s conclusion and, instead, asks her to join her in a plot to kill their step-father, but Chrysothemis refuses to engage in the scheme.

Later, Orestes enters carrying an urn, which supposedly holds his own ashes. Neither twin recognizes the other, but when Orestes notices the great distress Electra displays over the death of her brother, he reveals his true identity to her.

Orestes, with his companion Pylades, then goes into the house and promptly kills Clytemnestra. They place her body under a sheet and present it to Aegisthus as the corpse of Orestes. However, Aegisthus lifts the sheet to discover the lifeless body of his wife, prompting Orestes to reveal himself and his motives.

Aegisthus is then escorted off stage, where he will be killed at the hearth, a fitting revenge, as this was the location of Agamemnon’s death.

However, the play ends before the execution is announced. 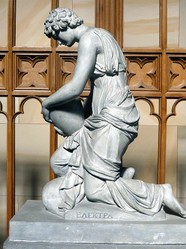