Whose Side is Cancer Research UK on?

The link between red meat and cancer is fairly well established, so why would Cancer Research UK ask people to have a barbecue?

Let me preface myself by saying that I'm not attacking Cancer Research UK as a whole. I have no doubt they do excellent work and their intentions are admirable.

However, I have to call 'foul' one of their fundraising ideas: BBQ to Beat Cancer. Sounds like an oxymoron to me!

Over the weekend of 19-20th of July (2014), Cancer Research UK is asking supporters to raise money by hosting a barbecue - at which friends and family will be asked to donate to the charity.

My beef (pardon the pun), is that Cancer Research could be causing more problems than it's solving. 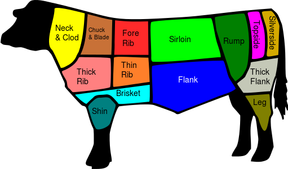 Because they do not specify 'vegan barbecue', I assume Cancer Research UK is expecting participants of their fundraising drive to use the usual barbecue fayre: beef burgers, steaks, sausages...AKA red meat.

Umm, are you sure you've thought this through properly?

There is weighty evidence that links red meat consumption with several cancers, most notable colon, bowel and, some assert, breast.

And the high level of saturated fat in red meat is, of course, linked to cardiovascular disease and good old obesity. Obesity, in of itself, puts us at higher risk of cancer...something Cancer Research UK mentions on its own website.

Unfortunately, very few health organizations or charities (even ones that acknowledge the negative health effects), will say that meat, and specifically red meat, should be off the menu - 'cause that would just be too drastic, wouldn't it? 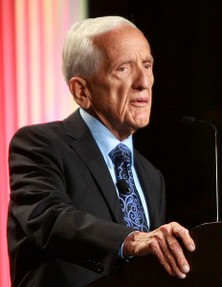 Instead, they'll pussyfoot around the issue, and say that it's acceptable as part of a 'balanced diet', which, I suppose, is a euphemism for, "A little of what you fancy won't do you any harm".

But, of course, a little of what you fancy can indeed do immense harm.

For instance, no medical professional worth his or her salt would say, "Well, smoking is OK, now and then, as long as you're being sensible about it and keeping otherwise healthy."

So, why are people so reluctant to talk openly about the foods that have the potential to kill us? Because there's no hyperbole to that sentence, there are good reasons that cancers and heart disease are becoming more and more prevalent, and in turn putting a strain on the health service.

Couldn't possibly have anything to do with the shift in our diet; the heavily processed meats; the antibiotic and hormone-filled animals that people are chowing down, could it?

Thankfully, though, there are people who are willing to go out on a limb and speak the 'unspeakable'.

T. Colin Campbell on The Link Between Animal Protein and Cancer

There is one other thing that Cancer Research UK's fundraising barbecue flies in the face of, and that's the evidence that barbecuing/grilling food is a major cancer risk, too.

How does barbecue put you at greater risk? Well, the amino acids in meat react with creatine, when cooked at high temperatures, creating heterocyclic amines (HCAs), which are believed to promote cancer. 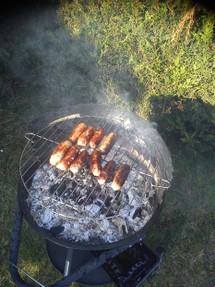 When barbecuing, as well as the risk of cooking at high heat, there are other carcinogens to worry about. Like all the dioxins in the smoke and flare ups from dripping fat.

So, would Cancer Research UK consider that a good fundraising idea...a smoke-a-thon?

Here's the thing, I don't expect Cancer Research UK to tell people not to have barbecues. I can even understand why they choose to shy away from being too vocal about the potential dangers of consuming meat - it would enrage many.

However, promoting something that could well be a significant player in the cause of cancer while on the quest to beat cancer is baffling at best.

And, I'm left wondering, whose side is Cancer Research UK really on?

Interested to Learn More About Your Diet's Impact on Your Health?

Five Biggest Lies We've Been Fed About Food
So many common beliefs about food and nutrition are wrong. In some cases, we've been actively lied to about what is and is not good for our health.
Updated: 07/06/2014, WiseFool
Thank you! Would you like to post a comment now?
6

Hi, Dustytoes. Thanks for popping by. If I could recommend just one of the books above (they're all fascinating and very persuasive), I'd suggest reading The China Study. The evidence provided is, to my mind, inarguable.

It's about so much more than food as medicine, it's about avoiding the foods that are, quite literally, killing us. Almost all Western diseases (those epidemics we're told are going to destroy the health service), can be traced to what we put in our mouths. Avoiding foods that humans clearly aren't meant to be eating in the first place is the key to keeping healthy.

I think you are right in saying that someone didn't think out this fund raiser very well! Some of those book links look very interesting and I plan to check them out. I definitely believe in the Food over Medicine approach to living.

Hi, Rupert. Thanks so much for sharing that report; pretty damning stuff. And it's this kind of thing that makes some people reluctant to give to ANY charity. The question is always going to be, is your money really going where it's needed? In some cases, the answer is a resounding 'no'!

Thanks, ologsinquito. You're so right, the pink ribbon on junk food is a similar scenario. At best, cancer charities that participate in this kind of thing are unscrupulous in the organizations they align themselves with and accept money from. At worst, they're verging on evil by profiting from diseases that they're inadvertently (I hope it's inadvertent anyway) helping to thrive.

I sincerely hope that, just as the dangers of smoking were suppressed until the evidence became too loud to ignore, the truth about food and the IMMENSE impact it has on our health is slowly beginning to be heard.

I'm concerned also about various cancer charities in the US, and where the money goes. One of my pet peeves is the pink ribbon logo emblazoned on junk food items. Great article.

My concern is the way in which cancer charities are run. CEOs take home massive salaries and the charities spend more on fundraising than on research. Here's a report from the Canadian Broadcasting Corp:

"CBC's Marketplace analyzed the Canadian Cancer Society’s financial reports dating back a dozen years. It discovered that each year, as the society raised more dollars, the proportion of money it spent on research dropped dramatically — from 40.3 per cent in 2000 to under 22 per cent in 2011."

I'm sure it's no different in other countries. Here's a link to the full report 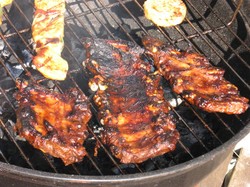