A Visit to Fredericksburg, Texas

Fredericksburg is a quaint German enclave in the Hill Country of Texas. It is a historic area that is well worth a visit.

I have just returned from a brief vacation to Texas. We hoped to visit Austin, but the accommodations were booked, at least the affordable ones, so we made reservations in san Antonio, Texas. On our first day we encountered temperatures exceeding one hundred degrees Fahrenheit, so we set out to the Hill Country to visit Fredericksburg. It was a pleasant trip, and although it was hot, it seemed less so than San Antonio.

Fredericksburg is a German area, settled originally by one hundred twenty immigrants from Prussia in 1846. This is according to the marker at the visitor center. It was named for Prince Frederick of Prussia. Prussia was the name of the area we now call Germany and Austria.

I have ancestors from many countries, and my maternal grandmother was descended from Germans, particularly Bavarians. One thing I noticed was the blue and white flag of Bavaria flying along with several other flags over a business.

Fredericksburg has quite a few businesses in the old, historic section of town.   I parked in a spot close to the center of town, and we looked at some of the wares of the local merchants.  One thing caught my attention, there were two candy shops selling fudge, something I often buy when on vacation.

Between the shops were eating establishments, a fortunate thing since it was getting time to eat dinner.  We found one located in a cellar, a place of respite from the heat above.  The walls were of stone.  There was one outdoor staircase to enter, and a second visible in the back that served as an emergency exit.  The cellar was beneath a building, and next to the building was a courtyard with a stone building set back still showing the old iron sign that indicates it once was a hospital.  My wife guessed the restaurant was in the old hospital morgue, since the building above appeared to be part of the old hospital.

We passed by and read the menu, then went to see what else might be available, but soon returned.  Since shops were closing for the day we had to first get to the candy shop first, eating establishments remain open later into the night.

Across from the visitor center on a street parallel to the main street was a rather large museum, devote to the war in the Pacific, and named for Admiral Nimitz.  It was too late to go inside, but outside was the bow of a submarine, a mound of grass, then the counting tower of a submarine.  A distance back past more grass was a mast, and I would guess it was from a destroyer.  Then there were several guns, some of which appeared to be antiaircraft guns from a carrier.  The building itself was a full city block long, and the ship parts extended the entire length.

There were been gardens, not just one, but several.  One was recessed with an outdoor venue in front, and changed from a restaurant by day to a beer garden by night.  A few musicians were tuning their instruments as we went by.

It appeared after sunset these establishments would become lively.  We could not wait to see if it happened.  The road was an undivided highway with a high speed limit, and after dark would be too dangerous for those not familiar with it.  We would leave before dark, but first did a short riding tour to take in more of the quaint area.

The Art of Fredericksburg

While finding books on this topic I came to find that there is an art of Fredericksburg.  The art is significant enough to be showcased in a book.  It is amazing how much of a unique culture these settlers had, and how much of it has been preserved.

There was a large empty piece of land, and at one end was stands for a market.  It was large enough to serve as a fairground.

I suspect this large tract of land would serve as the focal point of an Oktoberfest celebration.  I asked about Oktoberfest, and was told it was huge, but not told where it would occur.

The buildings were a mixture, and many apparently have stood since the area was first settled.  Some were made of stone.  The area had a European feel, but not necessarily Alpine.  I suspect it was a blend of Germanic buildings and buildings designed by local inhabitants who populated the area prior to the arrival of the Germans.

The introduction image is my own image..

blackspanielgallery, Did you hear anyone speaking Texas German? It's fascinating to visit the German enclaves in Texas, as well as in Argentina, Brazil and Chile. Perhaps the most famous is Bariloche, with President Obama visiting the Argentinian resort city in 2016 having presidential precedents with Theodore Roosevelt in 1913, Dwight and Mamie Eisenhower in 1960 and Bill and Hillary Clinton in 1997.

I am intrigued as to why they left Prussia though in that number. Naming it after the King suggests that he wasn't unpopular.
The German Catholicism may suggest it was religion motivated as Germany has never been exactly RC !
You are right when you say that "Prussia" would be meaningless to most people .

Your visit and write up prompt some interesting questions. TY

There s a second place called New Braunfels also in the Hill Country. Apparently the two areas were named for the King and Prince of Prussia. We passed through New Braunfels but did not get off the highway.
I knew of these German enclaves, but was quite surprised that in the center of San Antonio Saint Joseph's Church has the stations of the cross with both English words and German words inscribed below each station, and even signage in both languages. I heard one Mass is in German each Sunday.
The signs were the only places Prussia was mentioned, since to say Prussians settled there would be meaningless to so many who missed out on Germany coming from Prussia.

BSG
I love travelogues like this as I always feel they transport me to places I have no knowledge of and I learn such a lot .

Firstly I was totally unaware that there was any migration from Prussia in 1840's . I would like to investigate that further.
I am pleased to see that the place has retained some of its German identity. Plus, the sky is a really beautiful blue. 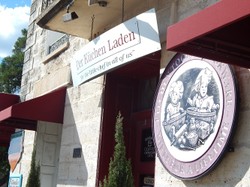 A Guide to the Historic Buildings of Fredericksburg and Gilles...
100%  16   9 Ragtimelil
Texas

My best personal pictures of Texas from my weekly trips across the beautiful Texas Hill Country. Wildflowers, animals, funny sayings on t-shirts and more.
Loading ...
Error!