A Visit to the San Antonio Botanical Garden

Visiting a botanical garden is a tranquil activity, and can be easily enjoyed by anyone willing to let the sights, smells, and sounds of nature take center stage for a few hours.

There is a botanical garden in San Antonio, Texas, that spreads across a spacious area. We arrived in the morning, and entered through an older building, certainly from another century. The fee is nominal, just $12 general admission, and $2 less for seniors, military personnel, and children. They had no restriction on photographs, which was a real plus.

Nearby is a Japanese Tea Garden, which does have a fee for photography. But, I believe it is free to enter. We had too little time to go to both.

It was a hot day, but the garden is arranged with much tree cover, so shade is easily found. And there are ample benches for those in need of resting. We arrived in a period where temperatures in the afternoon soared to over one hundred degrees Fahrenheit, and it was a prolonged period of over a week for such an occurrence. It was also during a dry spell, and concern of drought conditions were being heard on the news.

When we got into the garden we were at the formal garden section.  It was neat paths between raised beds, but not very colorful.  Many of the plants were not in bloom due to the heat and arid conditions.  I suppose when the roses are blooming it is a spectacular area.  This day they were not in bloom.

Surprisingly, there were banana trees in the garden.  These were larger than the ones that grow near my home.  I did not notice any bananas, but the foliage was lush and the trunks large.

On the way out we took a closer look, and indeed found some flowers not readily apparent.

Before getting back to the formal garden we traversed many trails.  They were well worth the effort, even if the greenery was what was most apparent.

One thing that quickly became apparent was the number of staff watering plants.

They Were Few, but Well Placed

When I view nature I am not looking for man-made objects, but the few sculptures were well placed and not intrusive.  I photographed one with scattered spheres, and the image is below.  Look closely and you will see the blue sphere in the distance, and the larger orange sphere dominating the focus of the garden.  Another is of feeding birds.

Sculptures in the Garden

A Fountain and a Waterfall

There was a small fountain in a pool, and a trough filled with water extending in one direction.  Small sprays of water arched into the trough.  At the other end of the feature was a pile of rocks with a waterfall feature.

This feature was too extensive to capture fully in one image, so I caught the two main parts separately.  The trough can easily be seen, and if ou look closely you can see he arches of water.

A winding trail rose upward to a tower feature atop a hill.  One could not get to the top of the tower, just its floor.  The roof had cacti visible from the path, but how they are tended is a mystery.  In the base of the tower were potted plants.  It was not enclosed with walls, so seeing in any direction was easy.

One feature was a small depression in the wall that paralleled the path up to the tower, and there was flowing water within.  The head of the flow was water coming from within the wall on the top.  It appeared to be a miniature aqua duct.  Following the water down it fed into a larger aqua duct feature, perhaps a foot across, that crossed a large part of the garden.

One trail descended with a series of long stairs.  It took four steps at each level to descend.  I went to see if it was worth everyone else making the descent, since climbing back would be more difficult in the heat.

There was a conservatory, but I had to rejoin my family so I did not enter.  There was also a pond feature.  The rest had no interest in going down the long descent, so we went a different way.  Eventually, we could see over the side of a wall, and we were looking out at tree tops visible through the glass.  The pond below was also visible, and easier t photograph than had I been at the edge of the water.

Cacti of various kinds were placed throughout the grounds.  Their structure is itself beautiful, even when not in bloom.  They were separated, so one could see the entire plant, not always the case with bedded plants.  I appreciate this feature.

One fortunate circumstance was that some of the cacti were in bloom.  There were just a few flowers, but looking at the buds I could just imaging the spectacular blooms that were poised to open.

Caladiums are attractive plants even when not in bloom.  One shaded section of the garden had copious caladium plants.  Their coloration was all similar, which made them appear as a bed of pink.

There were large hibiscus blossoms.  I was poised to take a close up when a bee flew to the flower.  I readied the focus to capture its image, only to see it go so deep into the flower it seemed to disappear.  Well, I would just wait, and it would soon emerge.  Indeed, it did, and walked across the flower.  When it got far enough out that its weight disturbed the petal on which it walked it flew away. I pressed the button just as it left, but my camera shutter was too slow in operating.  When I examined my photograph I realized the bee was faster than my camera shutter, for it was gone before I captured the flower’s image.

I do not panic when I see a bee.  I do not make a threatening move, and the bee goes about its business.  One is much more likely to be stung if the bee is put on the defensive.

There were three trails, not paved as the others were, but well maintained.  We took one, which was through plants native to a section of southern Texas.  There was brush and trees, some with names on small signs stuck into the ground.  At one point the trail got close to one of the other trails, but there was a stone wall that kept people from crossing over.

Time and temperature prevented us from taking all of the trails.  This garden could be a multiple day adventure if done right.

The trail we did take ended at the children’s vegetable garden, but it had little growing.  There were sorting tables, and a building with several large doors, perhaps a tool shed.

Bird Houses Add to a Garden

A multiple tiered bird house rests atop a tall pole in the garden.  In fact, there were a couple of cardinals that alighted while I was sitting on a bench.  Birds are welcome garden visitors.  I did also see a small bird that I took as a hummingbird, but it did alight on a branch briefly, behavior unexpected of a hummingbird.

Invite Hummingbirds to Your Garden

I suppose there is a better time of year to visit the garden, but it was still impressive.  I think if more were in bloom it might be sensory overload.  And, with fewer flowers are also fewer people.  It was very peaceful.

Even in the hot, dry season there was enough to make a visit enjoyable.  I would like to return.  For those living close to the garden there is an annual pass, and I would think it would be well worth the purchase.

I am happy we did not say this is not the optimal time for visiting a garden, for even in summer nature puts on quite s show.

This article contains links to affiliate programs from some or all of Amazon, Viglink, and Ebay through Viglink, and Adsense advertising.  These must use cookieside s to allow for proper crediting.

The introduction image is my own image..It is of the main building at the entrance to the garden, as shot from inside the garden.

At first glance I thought the cacti were growing in crevices in the wall. They were nicely done.

blackspanielgallery, My favorites are the natural beauty of the cactus spilling over the wall and the uneven edging to the conservatory trail.

Thanks, that is what I thought was happening.

Frank, many seed companies show the zones on their packs of seeds, and offer time intervals for planting by zone. It tries to determine day of last freeze, and other conditions. But, with our changing weather patterns the zones may be soon to become obsolete. The weather Texas was experiencing was considered unusual in both length of time with little rain and high temperatures. Areas closer to the Gulf of Mexico, this was inland, experience a sea breeze which is kept from getting too hot by evaporation. But, water vapor then acts as a greenhouse gas, so cooling at night is slow.

The US Department of Agriculture has divided the USA into eleven climate zones and advises on which plants to grow in each zone. The American efficiency is very commendable! There will be roses suited to the Texas climate, but of course weather fluctuations cause problems when they involve extreme conditions such as heatwaves and cold spells. It may be such weather conditions that are causing problems for the roses.

They did a credible job of incorporating cacti into the landscape. And they used quite a variety of cacti. We also visited the zoo and there were cacti in the gardens there, aoso in abundant variety, It is the vegetation of the area,
There was a rose garden, but it was not impressive due to the current weather. It would be a focus at another time. I am certain it is nice when in bloom.

No matter how good a botanical garden is, what flowers grow outdoors depends on climate, so there will always be some difficulties.

It is a nice place, but finding flowers blooming is not so easy. Yet, there were cacti full of buds, and I would thing they might have now opened.
The only problem is finding the garden. The GPS could not find it, since its address is not easily found.

I live 2 hours from San Antonio, I am going to get hubby to take me on a road trip! Beautiful photos!

Thanks for the comments. Due to time I managed only a portion of the garden. They do allow people to leave, pick up lunch, and return. 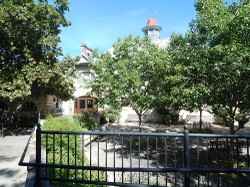 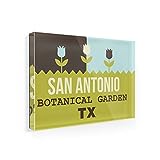 My best personal pictures of Texas from my weekly trips across the beautiful Texas Hill Country. Wildflowers, animals, funny sayings on t-shirts and more.
Loading ...
Error!