Action Learning: A Personal Story of Unleashing the Ideavirus

This is a story of how I contributed to unleashing the Ideavirus - action learning. I track the strategies used locally, nationally and globally to spread action learning.

Developing Action Learning as an Ideavirus

Action Learning: Focusing the Ideavirus on Change and Development

In the 1970’s, I was an active participant in action learning based, national projects within the Australian Taxation Office.  These included the design and implementation of a national online accounting and information management system, piloting a management control system and the restructuring of the Taxation Office nationally. Little did I realize then, how much action learning would become a part of my life and the role I would play in the global development of this approach.

In the early 1980’s Joan Bulcock and I, under the guidance of our mentor, Bob Dick, developed an action learning, project-based program for the development of senior executives in the Federal Public Service.  We followed this up by joining forces with other colleagues from a number of Government Departments to design and coordinate an action learning, placement-based program to develop Personnel Managers. This action learning program, the Personnel Management Exchange Program (PMEP), covered 27 Government Departments in Queensland.

Spreading the Ideavirus…action learning in a global context

Following my secondment to Griffith University in 1989, I was approached by Ortrun Zuber-Skerritt to participate in an International Symposium on Action Learning and Action Research as a Government representative.  Ortrun’s concept was to bring together international representatives from business, academia and government to share ideas and experiences concerning the use of action learning and action research.  This activity became the foundation of our long-standing friendship and collaboration on multiple projects involving action learning.

At the time, we both experienced considerable resistance within the University to the advancement of the ideals and approach of action learning.  People in power were threatened by the concept that placed less emphasis on the university as an “expert” institution and more on the university as a Learning Organization (including learning through, and with, students – “Heaven forbid!”).  There were a number of attempts to sabotage our efforts, but we persisted.

In 1990, we worked together with other colleagues to create the First World Congress on Action Learning and Action research which was held in Brisbane at Griffith University.  We invited Reg Revans from the UK, the Founder of Action Learning, to be our keynote speaker.  He gave very generously of his time and refused any remuneration.  I got to pick Reg up from the airport and take him to dinner, a very rich memory.

In 1991, we realized that we needed a network (a Tribe) and decided to rally others who believed that action learning could bring equity, justice, empowerment and real learning to the world.  We joined forces with eight other colleagues and formed the Action Learning, Action Research and Process Management Association (ALARPM).

I became a founding executive member and first Treasurer.  Then in 1992, I became President, a role I held for 8 years.  We had deliberately formed the ALARPM Association as a not-for-profit organization outside the University to strengthen our independence.

In 1992, executive members of the ALARPM Association and friends designed and conducted our Second World Congress on Action Learning and Action Research. One of our keynote speakers was Professor Emeritus Orlando Fals Borda from Bogota, Colombia – considered at the time to be one of the leading intellectuals in Latin America.  We developed a deep friendship with Orlando and he became the Convenor of our Fourth World Congress which was held in Cartagena, Colombia in 1997.  This Congress was a highpoint for our efforts as it was attended by 1,800 people from 61 countries. 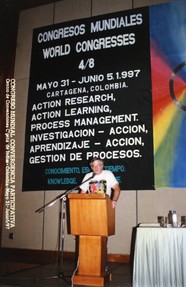 The ALARPM Association has held eight World Congresses including Congresses in Brisbane and Victoria (Australia), Bath (UK), Holland and South Africa.   Since its inception, the ALARPM Association (now the ALAR Association - ALARA) has produced member newsletters and an International Journal on Action Learning and Action Research together with local, national and international conferences.  Regular practitioners’ workshops are held in Brisbane.  Our colleagues and friends interstate and in New Zealand have actively participated in, and supported, our activities and conducted their own local events.  Eileen Piggot-Irvine has been a close colleague and leader within the NZ network. 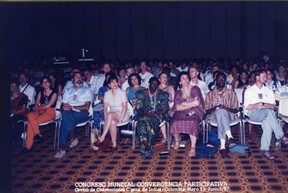 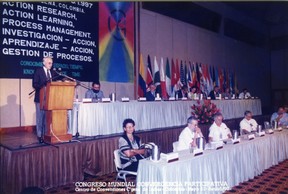 Embedding the Ideavirus …action learning at a sectoral level

Besides my activities within the ALARPM Association, I have been directly engaged in advancing action learning within the Vocational Education and Training Sector.

From 2000 to 2004, I was engaged on a consultancy basis to work with senior managers in the Vocational Education Sector in Australia to build sector capacity for online learning and teaching.  This involved the creation of action learning sets on an annual basis with each of the senior manager participants being charged with the development of a whole-of-organization change management plan for their Institutes.  I facilitated the action learning sets via face-to-face workshops, online conferences, one-on-one meetings, teleconferences, email discussions and phone support.  The participants in the Change Manager’s Program were drawn from six of the seven Australian States.

Grounding the Ideavirus…action learning at an organizational level

In 1991, I was engaged by the Registrar of the University of Queensland as an external consultant to work with the Tertiary Education Institute (TEDI) to develop, conduct and evaluate an action learning program for leadership development and innovation development.  The project-based program covered the whole university – all disciplines and campuses.  It was conducted over 9 years and my involvement covered 1991 to 1996.  The QUAL Program as it was eventually called, won awards and was judged by a national quality assurance committee as Best Practice for the University Sector in Australia.  Other Universities, such as Edith Cowan (Perth) and University of New England (New South Wales) modelled their action learning programs on the QUAL Program.  The QUAL Program was the focus of my PhD research thesis, Action Learning for Professional and Organizational Development: A Case Study in Higher Education.

Infecting individuals with the Ideavirus…action learning for manager development

From 2007 to the present, I have worked with Julie Cork and colleagues to develop managers in State Government Departments throughout Queensland through an action learning based, Practical People Management Program (PPM).  This action learning program focuses on developing people management skills and incorporates workshops, on-the-job practise and a work-based action learning project.  The Program has been conducted from Roma (500 klms West of Brisbane) to Cairns (1,700 klms North of Brisbane) and many places in between.  The program is conducted mainly on an organization basis (rather than a public offering) and often entails a system-level intervention.  We have trained over 2,000 managers, 20 at a time over a period of 4-6 months for each program.  Each of these managers is capable now of acting positively on their organization through action learning.

Action Leaning – an Ideavirus that has spread

Action learning is an idea that has now become accepted worldwide in both the public and private sectors.  Organizations such as General Electric, Hewlett-Packard and Shell use action learning for manager and organization development.  This story shows how a group of dedicated enthusiasts can spread an ideavirus such as action learning.

Amazing story, Ron. I appreciate the part about "learning with students---Heaven forbid!". Happened to me before...the people I tried to teach taught me quite a few valuable lessons along the way.

Action Learning is an Ideavirus because of its intrinsic characteristics that... 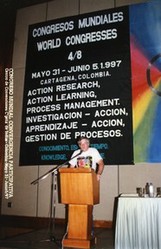 Action Learning is an Ideavirus because of its intrinsic characteristics that build confidence and self-belief and create positive change for individuals and social systems.
Loading ...
Error!