Among The Ruins & Rubble A Magnificent Tiger

No civilization here for among the ruins and rubble a magnificent predator lurks. The tiger rules from the dizzy height of staggering cliffs within the park. Critically endangered it has brought to life the forgotten paths of Bandhavgarh Forests in Central India.

Way Back in Time

Very few parks in India are as picturesque as Bandhavgarh National Park. Situated in Umaria District of t 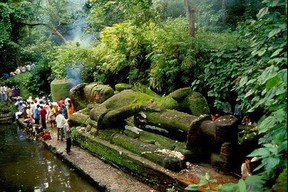 he State of Madhya Pradesh Bandhavgarh carries history in its womb. It was witness to budding civilization, the creation of magnificent temples, man-made caves reservoirs, and a fort complex. A fort complex sufficient to hold a garrison.

Situated at Bandhavgarh Hill the fort complex covers a large area on this tabletop mountain. In

As a matter of fact, right from the entrance as you head for a safari, you can see the fort walls encircling the mountain. The exotic structure is an introduction to the park and takes you way back in the time in a jiffy. Actually much before the tiger makes its presence felt.

In Tala Zone, you drive up the crazy ascent, steep and dangerous to reach Shesh Shaiya. The rock idol of Vishnu is twenty feet long and reclines beside a fairy pool enshrouded by a plethora of ferns and shrubs. The microforms like algae and fungi have infested the walls and make them look timeless and more exotic. The looming trees assure shade in the parched land and the coolness is magical. This is where the exhausted soldiers on horses came to rest. A welcome rest before another steep climb to the fort. The aging shelters greet you all way big enough to house the horses carved out the walls of igneous rocks.

A picture of solitude in the arch is a surprise amidst the dense vegetation all around. Standing alone and idle, it stands like a sentinel in the fairyland. The marvelous structure has a large wooden gate in between two domed chambers (chhatris) which hosted the guards in the heydays of the Maharajahs. Now hordes of bats infest this structure in the wilderness.

The loneliness at this isolated destination becomes apparent as you proceed further back into the time. The tall grass beside the pathways harbors wildlife and scattered idols of zoomorphic Lord Vishnu. The most striking is the first one that stands erect on the edge of the mountain. As you pay reverence, the whole mountain seems to loom down into the esoteric realm of diverse life that is Bandhavgarh. Hills and valleys, snaking rivers and swampy grasslands the sight bedazzles. You will come across many zoomorphic avatars of Lord Vishnu prominent among them is the Varaha avatar (boar) and matsya avatar (fish). A Lord Ram & Janki Temple lies on the edge of the mountains where a priest still attends. On festival days hordes of local tribes visit the mountain to pay reverence to the Lord. 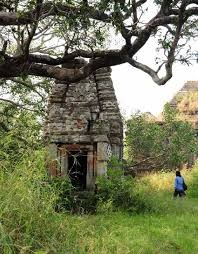 His Highness the erstwhile Maharaja of Rewa Martand Singh Ji discovered the miraculous wonder, the white tiger near these forests. He went on to nurture the lone white cub Mohan which is now history. Many of his progeny are now housed in imminent zoos.

The Maharajah of Rewa an iconic figure was the last ruler of this esoteric paradise on Earth. He was from the Baghel Clan.

The fort complex was initiated by the early Gond rulers and subsequent construction may have come around as dynasties changed rules. The fort is mentioned in ancient Hindu scriptures that date it back to an unwritten past perhaps.

Some of the dynasties that came to rule Bandhavgarh were Gonds, Sengars, Barihas Vatakas, Culchuri, and lastly the Baghels. But the turbulent past enmeshed in bloody battles is over.

Today the big cats rule supreme for the destination is no more the citadel of humans. Wilderness housing the ancient leftovers are visited by tourists in quest of the tiger.

Being a tiger reserve no human habitation is allowed in the critical tiger habitat. A small portion of the park is reserved for tourism.

A Search For The Tiger

As the safari proceeds, you are greeted by the enchanting landscape of Bandhavgarh lighted by the rising sun. The strong rays play hide and seek in the torturous terrain in between the dense canopy and clearings containing the grasslands.

A maze of niches greets you as you move further. This is no plain land steep cliffs and glens all around. The rivulets are striking with inundated shores out which vegetation peaks out. All around you are the tall stands of Sal dotted here and there by bamboo clumps and mixed forest.

This is where you search for the tiger. The safaris are exciting no doubt but a vacant feel engulfs you till you come across the magnificent predator. The deer. langur monkeys and wild boars are all around.

Whence you come across the tiger an exhilaration is what you feel. The cherished sight of the magnificent predators makes you speechless. So striking is the beauty of this animal that a permanent recess is created in your memory cell to be visited again and again. Unforgettable! 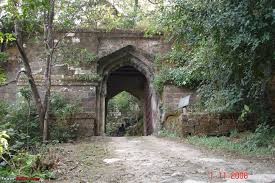 The park is open for tourism during the months of October to June. In the monsoon, the park is closed as the slush prevents and stalls the movement of the vehicles.

Tiger safaris are allowed in the early morning and late evening. You can also avail a full day safari. A permit is required for the safaris and a charge has to be paid.

Excursions at the Historical Bandhavgarh Fort are closed at the moment. It has proven to be an excellent breeding ground for many species. But whenever the fort opens for excursions it is worth a visit. Fortunately, you can drive up to Shesh Shaiya Idol and reach many historic structures all around... This will surely give you an idea of what lies ahead.

Most of the Indian are vegetarian precisely because of reverence to wild animals. Killing wild boar is illegal and can lend one into jail. However livestock like boar, chicken, buffalo, goats and at some places quails reared by humans is consumed and is not against the law.

pateluday, Thank you for all the practical information, pretty pictures and product lines.
Do wild boar receive special attention or reverence since Lord Vishnu's third avatar was as Varaha? 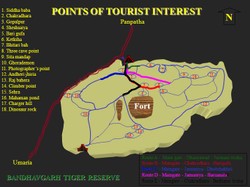