Ancient coins often give glimpses into history in unique ways. Images of ancient coins can be used as decorative art that will attract interest.

Of course, higher grade coins are more desirable. Many well worn coins look like disks with little detail. This is because no one has a can of pristine ancient coins hidden in an attic from the year in which they were minted. Ancient coins are usually dug up after years of having been buried. This is not conducive to having great specimens. Also, ancient coins were minted before mints had machinery to put pressure on planchets with well engraved dies. Some ancient coins, those minted for military payment, were often minted by portable mints that went with the soldiers by a person who applied pressure with a hammer. Yet despite this, great specimens do occasionally come available.

Some ancient coins of high quality are available in art form.  No, you cannot turn the print over and see the other side, but you can appreciate the image that is there.  And you can display the image without fear of having a valuable coin stolen.

Prints can be placed on walls in your home, or in a business.  Match a group of images and find you have a wonderful decorating scheme.

Images can also be found on other objects, such as coffee mugs.  Imagine having a mug on your desk with an ancient coin image.

Mugs can be used for coffee or tea, but also for many other decorative reasons.  Mugs can hold candy, pens and pencils, or other desktop items.

Ancient coin collectors often specialize.  Some prefer one of the three periods of Roman history.  Others collect ancient coins from Greece.  Some collect coins from the Holy Land.

Collections can also include later, albeit ancient, coins.  Medieval coins from Europe are interesting.  Perhaps a collector will concentrate on a country from which the coin was minted.  William the Conqueror established the mint in England in the eleventh century, but there was already a slightly older mint in Paris.  So old British and French coins are among those one could appreciate.

China and Japan also have had coins for many centuries.  The nice part of collecting affordable art is that one can easily collect coins from one, or several, interests.

Collecting British Tribal Coins Poses Problems
In the late Iron Age in southern Britain the British tribal coins were minted. There are problems associated with collecting these Celtic coins.

Iron Age Coins of British Tribes
The Iron Age coins of Britain exists as pre-roman coins, but only for a small number of tribes.

Coins are not unique in matched art.  Art themes for businesses abound.

This article contains links to affiliate programs and Adsense advertising.  These must use cookies to allow for proper crediting. As a Zazzle, a Viglink, and an Amazon Associate I earn from qualifying purchases.

The introduction image is our own Zazzle product.

Ancient coins are not available for every culture, although if they exist they are probably meaningful to collectors. I know Biblical coins are a collecting specialty, but often are of Roman origin when what is now Israel was occupied by Rome. Desert nations might have problems associated with shifting sands hiding coins. In Europe many coins were buried by soldiers entering battle, and later found if the soldier had been killed or fled.

blackspanielgallery, Thank you for the practicalities and products.
Are ancient Asian coins outside China and Japan not available or popular with collectors or inspirational for mug art?

Thanks for stopping by. This was intended to be a light article, not pertaining to any problems.

It is good to keep up the flow of articles at this period of stress. Thanks, I learned something here. 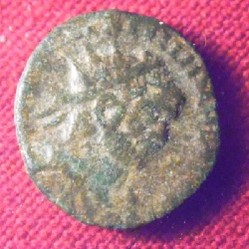