The ability to observe what happens, to understand what is observed, and to use the information to discover new ideas is the mark of the scientist.

Archimedes took a bath and came out, not only clean, but with an important idea — now called "specific gravity."

Archimedes was born about 287 B.C. at Syracuse, Sicily. He was the son of a Greek astronomer, Pheidias. Archi¬medes studied at the famous school of mathematics in Alexandria, the center of learning in the later Greek world. He was a student of Cenon of Samos, the noted mathema¬tician of the day, a follower of the famed Euclid.
Archimedes spent his life in philosophical and mathe¬matical studies. To the Greeks of his day, manual labor was considered degrading, and they looked upon experi¬mentation with distaste. Many scholars believe, however, that Archimedes must have performed actual physical experiments before he was able to formulate his mathema¬tically exact conclusions. Archimedes did not describe the experiments, but he wrote up his conclusions as though they resulted from purely mental theorizing. From other writings, however, we find out that he had made many practical applications of his findings.
The story is that he arrived at the idea of specific gravity — still called Archimedes' Principle — while in the bathtub. King Hiero II had ordered a new crown and had supplied the crownmaker with a quantity of gold. The finished crown weighed the same as the gold, but the suspicious King thought that some silver had been mixed in with the gold, to the illegal profit of the crownmaker.

It was already known that different materials had different weights: A cube of gold weighed more than the same size cube of silver. A simple solution, then, was to melt down the crown, cast it into a cube and weigh it. If it weighed less than the same size cube of gold, the crown-maker had mixed in some silver and had taken the King's gold. But this "simple" solution would destroy the crown. The problem was to check the quantity of gold in the crown without destroying the crown. The King asked Archimedes to look into the matter.

And so we come to the celebrated bath. As Archimedes settled himself in the bathtub the level of the water rose, of course. The more of his body that was under water, the higher the water rose. Archimedes realized that this was a fine way to measure an irregular volume. Archimedes filled a container with water and carefully suspended the suspected crown in the water. He caught the water that spilled out — the overflow must be the same volume as the crown. Now it was a simple job: obtain a volume of gold equal to the volume of the water and check its weight against the weight of the crown. greedy goldsmith was found guilty and was execut e'd. But more important, scientists and engineers have since compared the weight of a volume of material with an equal volume of water and called the result Specific Gravity.

The specific gravity of gold is about 20, which means that a pint of gold would weigh twenty pounds, since a pint of .water weighs about one pound. A pint of silver would weigh only about ten pounds.

Closely related to the measurement of the gold crown is the matter of buoyancy. Possibly Archimedes noticed that the bath water seemed to hold him up, that he tended to float, or he may have noted that some materials such as wood, do not sink in water. He wondered whether the water had any buoyant effect on objects that sank. He studied the problem and came up with the idea that "a body immersed in a fluid is buoyed up with a force equal to the weight of the fluid that it displaces."

Watch the Demonstration of the Archimedes Principle

This means that if a block of iron weighs, let us say, eight pounds, it will take up a certain amount of space. It will, if placed in a filled tank, displace a certain amount of water. In this case about one pound. If we weigh the block of iron while it is in the water it will seem to weigh seven pounds. The seven pounds results from its original eight pounds less the one pound of water it displaces. It has been buoyed or lifted by the amount equal to the weight of the water it pushed aside.

The reason we can float and swim is because our bodies weigh just about the same amount as the water we dis­place. Thus in water we weigh practically nothing. That is why it is much easier to float when we are completely under the surface, head and all, than if we try to keep our heads out. A piece of wood, or a boat, does not float en­tirely on top of the water, but must sink just deep enough to displace an amount of water equal to the weight of the wood or the boat. As a ship is loaded with cargo it sinks deeper and deeper into the water, since it must displace more water in order to equal the weight" of the ship. Thus we speak of the displacement of the ship. A modern pas­senger liner may displace 80,000 tons of water; in other words, it weighs 80,000 tons. Submarines — including the atomic sub — depend on Archimedes' Principle.

Archimedes is credited with inventing a device for lifting water. This is still called the Archimedean screw. It con­sists of a large spiral screw fitted snugly inside a cylindrical case. As the screw is turned, the water is pushed along as shown in the illustration. This same principle has been used for handling wheat, and the screw drive is used in automatic stokers for bringing coal to a furnace and for removing the ashes. The same idea is found in most every home — look at the meat grinder a housewife uses and see how the screw drives the meat along.

Archimedes developed and demonstrated the mathemat­ics behind the use of the lever. By means of this simple device man has been able to multiply the force available in his own hands to enable him to move very large loads. To emphasize his point Archimedes declared, "Give me a place to stand, and I will move the earth." The law of the lever can be understood from the diagrams.

Look at the see-saw in the park. A light child at one end, but far away from the crossbar, can balance a heavier child at the other end, providing he is closer to the crossbar.

Archimedes contributed to pure as well as applied mathematics. One of the problems that has never been solved is that of "squaring the circle." This really means to find the exact area of a circle. Mathematicians have given us a very close idea. They tell us that the area of the circle is equal to -a R2, where -n- (pi) has the approximate value of 3.1416. This number has never been determined exactly, even with the use of modern giant electronic calculators, but Archimedes calculated the value of rr with remarkable accuracy, at between 3.1408 and 3.1429. He also did a great amount of work in what is called analytic geometry, especially in the properties of sections of spheres and of cones. A spiral, called the Spiral of Archimedes, is still studied by every student of calculus.

Archimedes and his work

Archimedes turned his talents to the machinery of war, as did many scientists in the history of civilization. His knowledge of levers was used in the construction of cata­pults. History records that it was Archimedes' catapults that "wounded the enemy at every range" and turned the tide in favor of the Greeks during the defense of Syracuse in 215 b.c. Polybus, the historian said, "So true it is that one man and one intellect, properly qualified for the par­ticular undertaking, is a host in itself." In modern times we see that this is still true; it was only a small band of atomic scientists who produced the terrible atomic weapons.

Several years later, Syracuse was captured by Marcellus, the Roman general. He had given orders that Archimedes be spared and his home left untouched. Something went wrong and Archimedes fell victim to the sword of a Roman soldier. The Romans buried him with honors and marked his tomb with his favorite symbols, a sphere and a cylinder.

Archimedes was a giant, a scientist and mathematician of extraordinary greatness — "one man and one intellect — a host in itself. 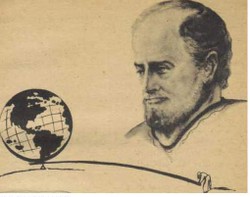 Aristotle the Scientist and His contribution to scienceon 01/21/2016

Have you ever thought about your life without electric light, mobile phones, radio? Nikola Tesla gave us many inventions that made our lives easier.
78%  13   6 curiousengineer
Scientists