Aristotle the Scientist and His contribution to science

"If I had my way, I should burn all the books of Aristotle, for the.study of them can lead to a loss of time, produce error, and increase ignorance."

This extraordinary statement by an outstanding scien-tific thinker Roger Bacon, critical as it sounds, is in reality a magnificent tribute to the influence and importance of this early Greek scientist-philosopher.
Aristotle was born in 384 B.C. in the town of Stagira at the northern end of the Aegean sea. His father was an educated and influential man, the court physician to the grandfather of Alexander the Great. His early education was obtained at home and his father provided him with an extensive background in the Natural Sciences.

In 367 b.c., at the age of seventeen, he went to Athens which was a center of learning. In Athens he studied under Plato, the great philosopher of the time. Here he showed independence of mind and spirit, taking what he felt was . useful in Plato's thinking, but disagreeing with, and extend­ing Plato's philosophy when he felt the need to do so.

Aristotle soon became recognized as an outstanding teacher. He was called to Macedonia to tutor the fourteen-year-old Alexander. Alexander, who became Alexander the Great, never forgot his teacher and later provided him with funds to continue scientific studies and research.

It is estimated that Aristotle produced somewhere be­tween four hundred and a thousand books. There is some question as to whether he produced the books alone or whether he simply collected the writings of fellow scientists and philosophers. The writings are so extensive and cover such a wide field of activities that it seems hardly possible that one man could have produced them.

It is known that Aristotle had one of the earliest teams for scientific research. About 1,000 men traveled through­out Greece and Asia collecting specimens of sea and land life and making reports to Aristotle of their findings.

It is in the fields of biology and zoology that Aristotle made the most lasting of his scientific contributions. In this activity Aristotle displayed a remarkable understand­ing of scientific method as we recognize it today. He spent much time at the waterfront collecting and examining the sea life about him, and his observations about animals of all kinds are extraordinarily good.

Some of his findings, once thought to be absurd, have been found to be perfectly accurate. He recognized the ladder of nature: the way living beings may be classified by their complexity. He recognized the functional perfec­tion of the creatures about him — realized how they are fitted to the conditions of their lives. Aristotle was, early in civilization, a forerunner of that great band of scientists who recognize that there is system and order in the world - that things are not haphazard.

A basic method of science is observation and experiment in the laboratory and in the world about us. Aristotle and his research team performed beautifully in this way in the field of biology. There was a gap of some 1,500 years before Albertus Magnus took up Aristotle's work and en­larged upon it. Magnus, too, made original observations upon which he based his extensions and criticisms.

Aristotle did not confine his biology to externals, but was the first person to make dissections of animals. He uncovered some of the differences in internal structure.

Here again he was a forerunner of modern biological methods.

H. G. Wells in The Outline of History said about Aris­totle: "He anticipates Bacon and the modern scientific movement in his realization of the importance of ordered knowledge. He set himself to the task of gathering together and setting down knowledge. He was the first natural historian. Other men before him had speculated about the nature of things, but he, with every young man he could win over to the task, set himself to classify and compare things."

Why then did Bacon want to avoid the study of Aris­totle? Because Aristotle, who was so careful in his biology was woefully wrong in his physics. The scientific method he used so well in biology was .misused or ignored in the study of astronomy and physics. The influence of Aristotle was extraordinary for 1,500 years: his writings began to take on the aspects of articles of faith and were accepted as being true simply because Aristotle had written them.

Here are some of the ideas Aristotle advanced. He sup­posed that all the properties of all things on easth could be accounted for in terms of whether they were hot or cold, wet or dry in varying amounts. Changes in these qualities could be explained by supposing four elements: water, air, fire, and earth. Many things could be explained on this basis. For instance if a log is put on a fire, water will ooze out of the wood, air (smoke) comes out, fire will appear from the log, and earth (ashes) will be left. The heavens were made of another element, which did not change. Thus the universe was made up of five elements.

The heavens were in outer space; fire went up, earth went down, water went above earth, air went above water but below fire. The four elements of the earth went up or down; the Heavenly element traveled in a circular motion. The circle was a perfect figure and therefore obviously the correct motion for the perfect element.

In 1609 when Kepler found that the planets moved in elliptical paths he had difficulty convincing himself that this was true because of the long history of Aristotle's heavenly element.

Since the time of Galileo it is well known that, neglect­ing air resistance, heavy and light objects fall at the same rate. Aristotle, however, made some inadequate observa­tions and came to the wrong conclusion. He saw that a stone falls faster than a leaf — which it does — and he concluded that the heavier body falls faster than the lighter body. For example he argued that a two-pound weight will fall twice as fast as a one-pound weight. But he didn't try it; he was satisfied that it was logical and therefore true.

In about the year 1585 a Dutch mathematician dropped two balls made of lead out of a window. One ball weighed ten times the other. They were dropped onto a wooden platform thirty feet below the window. There was one sound as they hit, proof that both weights hit at the same time.

Aristotle was a great man of science. The tragedy was that he was too great. The lesser minds that followed him accepted his errors along with his achievements and sought to find in his writings the answers to all problems for all time. 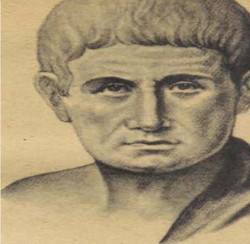 Have you ever thought about your life without electric light, mobile phones, radio? Nikola Tesla gave us many inventions that made our lives easier.
80%  13   6 curiousengineer
Scientists