Barts hospital has a special place in the hearts of Londoners, both for its historical interest and the fact that we have always enjoyed having a hospital in the heart of the City.

When I went to casualty, as it was called then, at Barts, it started my love affair with one of the oldest hospitals in the world. I was 21 and had severely burned my arm. Because it was a food related burn, I had to have tetanus. I spent quite a lot of time there. I wasn’t the only one waiting for treatment – a police officer with a nail stuck in his hand to name but one. Since then, Barts has gone through a great many changes, but it still survives.

St Bartholomew’s or Barts as it is known to Londoners, is one of the oldest hospitals in the world.  In fact, it is the oldest hospital in Europe and the oldest in the UK still on its original site.  For those of us who have ever used this hospital, and I have, on more than one occasion, we are more than grateful to him.  My love affair started when I first went to the casualty unit when I was aged 21.  Since then, I’ve been back for other tests, in the state of the art (if that’s the correct terminology for a hospital) equipment that they use.

My photograph of the gatehouse. Barts was founded in 1123 by a monk named Rahere (sometimes known as Raher or Raherius) who was a big favourite of King Henry I.  Rahere was a on a pilgrimage to Rome when he fell sick and had a vision of St Bartholomew.  He then made a vow and founded both a priory and a hospital for the poor in Smithfield, London.  In the early days, the sick were cared for by the priors and prioresses but over time, the hospital became independent.  By 1420, the priory and the hospital were completely separate, something which was to benefit the hospital later, when Henry VIII dissolved the monasteries in 1539.

When the dissolution happened, of course, the priory was included and closed down.  The hospital remained, but it had no income and its future was, for a time, uncertain.  However, the public was concerned too, and they petitioned the king to save Barts, and also provide three more hospitals.  He eventually agreed and in December 1546, he signed documentation to grant Barts to the City of London.  The other hospitals were Bethlem, Bridewell and St Thomas’.  Of these four hospitals, Bridewell no longer exists.

In January 1547, the hospital’s position was confirmed by letters of patent and it became known as the “House of the Poore in West Smithfield in the suburbs of the City of London of Henry VIII's Foundation.”  Not a name that easily trips off the tongue and was never generally used.  In 1546, the first superintendent, Thomas Vicary, was appointed.  Two years later, he became the resident surgical governor and remained in that post until he died.  However, it wasn’t until 1567 that the first regular physician was appointed to the hospital.  It’s rather a shame he didn’t stay there, as he was later appointed as physician to Elizabeth I and was accused of plotting to poison her, so he executed.

In 1609, William Harvey was appointed as physician to the hospital, which gave him the opportunity to carry out his research into the circulatory system.  In 1666, the Great Fire of London occurred; although the main building was not damaged but a number of its properties were damaged and thus some of the wards had to be closed.

In 1749, Percival Pott was appointed surgeon at the hospital.  Pott was one of the founders of orthopedy (perhaps because he suffered a nasty fracture and had to persuade his doctors not to amputate the leg) and was the first scientist to show that environmental carcinogens might play a role in causing cancer.  In 1815, John Abernethy was appointed surgeon.  He gave his name to the Abernethy biscuit, which was intended to aid digestion.  He also persuaded the board of governors to give formal recognition to the medical school, which had been developed and grew during the latter part of the 18th century.  In 1850, Elizabeth Blackwell (see http://wizzley.com/the-first-women-doctors/) was given permission to study there.  Unfortunately, after she left, women were excluded until 1947.

Between 1729 and 1770, the hospital was rebuilt, to a design by James Gibbs.  Gibbs designed the hospital to have four blocks, which were nearly identical.  The first to be built, the North Wing, the administration block, has the Great Hall and main staircase which have murals painted by William Hogarth depicting Christ healing the sick and other biblical references.   This, and the East and West Wings are now Grade I listed buildings.  The South block was demolished in 1937.  Other buildings have been built since and there is a fountain that was built in 1859.

In 1877, the school of nursing was founded, and the first probationers (as student nurses were called) were admitted to the hospital.  In 1881, Ethel Gordon Manson (later Mrs Bedford Fenwick) was appointed as matron. One of the firsts for Barts was that she went on to become Britain’s first state registered nurse.

In 1937, Barts became the first hospital to offer mega-voltage radiotherapy to cancer patients.  It was officially named St Bartholomew’s Hospital in 1948 when the National Health Service was established.  Barts became a teaching hospital in the newly formed City and Hackney Health District in 1974.

In 1992, Barts was one of many hospitals that faced closure as a result of the Tomlinson Report into the London Health service.  It is no exaggeration to say that there was a public outcry at the mere suggestion that this much loved hospital should close.  Over one million people signed a petition to keep it open and it was eventually agreed that the Smithfield site should remain, although not in exactly the same form – instead of being the “general” hospital that it had been, it remained open as a specialist cancer and cardiac hospital, joining with the Royal London and the London Chest Hospital to form the Royal Hospital NHS Trust.  The Queen Elizabeth Hospital for Children joined later.  The general functions were all transferred to the Royal London.  The medical colleges of Barts and the Royal London merged with Queen Mary and Westfield colleges.

Since then, the hospital has gone from strength to strength as a leading cancer hospital, but besides this, Barts has an incredible collection of hospital records, dating back to 1137.  It also holds records of other hospitals in the area and related information.  The archives are open to the public by appointment, and are free to enter.

There is also a museum at Barts, with video and sound recordings telling the story of the hospital from its beginnings.  It includes works of art and surgical and medical instruments used in the hospital, including the amputation instruments that belonged to John Abernethy.  It is open from Tuesday to Friday and certainly well worth a visit if you are in the area, but check on 020 3465 5798/6798 just to be sure it’s open as it’s staffed by volunteers.

Barts was the site of the first meeting between Sherlock Holmes and Dr John Watson, both in the books and in the BBC series starring Benedict Cumberbatch and Martin Freeman.  It was one of the chemical research labs in A Study in Scarlet that Holmes and Watson met.

In the final episode of the second series of the BBC series, Holmes appeared to jump from the roof of Barts, but it also appeared again in the third series to explain what happened. 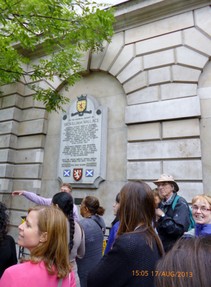 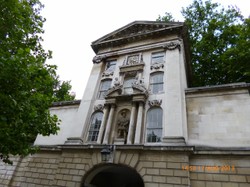