What are the mythical Basilisks and cockatrices - how are they related and how dangerous are they?

Basilisks and cockatrices, creatures of myth and legend, what are they? Not the most well known of the mythical creatures, a basilisk does have its 15 minutes of fame in the Harry Potter book "Harry Potter and the Chamber of Secrets." Basilisks, not only in Harry Potter's world, are dangerous, evil creatures with the power to kill with a single glance.

A basilisk is usually depicted as a crested reptile, the king of serpents. In fact there is a kind of lizard called "Basiliscus plumifrons" or Plumed lizard, also Green Basilisk, the male of which has 3 crests: on the head, on the back, and on the tail (the female has only a crest on the head). These lizards are able to run across water (at least for a short distance) and are not dangerous at all.

Back to the mythical basilisk, though, this is a lizard or snake, or a composite of a reptile and rooster, with the head and front legs of the rooster and a reptilian tail. And here we get to the cockatrice - sometimes the creatures have wings, and then they are called cockatrices.

Basilisks and Cockatrices - Where do they come from and what do they do?

The basilisk is a mythical or legendary creature. It gets its name from the Greek basilskos, "little king," and is so-called because it has a white mark on its forehead that resembles a crown, also in some depictions, a crest standing up on its head like a crown. The basilisk is said to be hatched from the egg of a snake by a cockerel. The cockatrice, in contrast, is hatched from the egg of a rooster by a snake or toad, and so it has wings, unlike the basilisk.

The basilisk of ancient mythology is small, no more than a foot long, but still deserves its title of "little king" because it is extremely dangerous, lethal in fact. Snakes are routed by its hiss; bushes and plants wither at its breath; its bite is so venomous even a horse will die; and one glance from its red eyes can kill a man. Don't mess with the basilisk!

Because it is so dangerous and takes a reptilian form, Christianity cast the basilisk as the symbol of evil, a representation of the devil. Many depictions of basilisks (or cockatrices to be more precise) show them being defeated by Christian knights. There is even a stone relief of the lion (Christ) killing the basilisk (devil) in Gurk Cathedral, the ultimate depiction of good triumphing over evil.

The Basilisk from Harry Potter

How do you kill Basilisks and Cockatrices?

We realize these creatures are deadly. But they're not immortal, so what kills them?

Well, there's a couple of things. First off, apparently the weasel is the basilisk's mortal enemy. So if you can find a weasel it will kill the basilisk or cockatrice for you!

In similar vein, it is said that the crowing of the cock sends a basilisk into convulsions till it dies. Wow, and usually they just wake you up!

Another, perhaps more meaningful way of dealing with the basilisk involves turning its own weapon against itself. Here's where the trick of holding a mirror (or the knight's shining shield works too) in front of your face so that the basilisk looks in the mirror instead of your eyes, and the evil glare is reflected back and kills the basilisk.

There seems to be quite a good moral in this version, implying that defeat of evil comes not necessarily through physical strength but can be accomplished by turning the power of evil back on itself.

Viennese legend about killing a basilisk with a mirror

There is an Austrian tale about a monster that was found in a well in Vienna. It turned out to be a basilisk, and it was finally killed by a brave young man going down into the well with a large mirror. When the beast saw its ugly reflection in the mirror it exploded!

You can find a retelling of the legend here.

Basilisks and Cockatrices in Art

The following artworks are called basilisks, yet some appear with wings and thus would more correctly be termed cockatrices.

More about Basilisks and Cockatrices

What do you think about Basilisks (or Cockatrices)?

What interesting creatures. I'd never heard of them before now.

I found a version of that legend - a basilisk in a well in Vienna! Thanks!

I remember a coin from Austria a few years back that featured a basilisk, and the legend had it in a well. 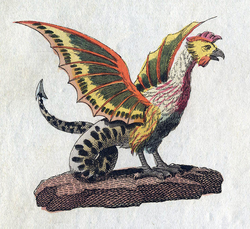 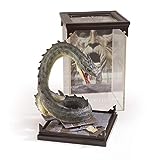