All about the beautiful firebird from Russian folklore, the bird with feathers that glow like fire

The beautiful firebird of Russian folklore has feathers that glow with light. This mythical bird looks rather like a peacock, but its feathers glow in all the colors of fire - yellow, orange, and red. And they don't stop glowing even when removed from the bird - an occurrence that seems to happen in all the tales of the firebird!

This mythical bird is known to bring both good and ill fortune to its captor. Yet in all the tales about firebirds there are always people on a quest to capture one, with a mixture of consequences.

Image of Ivan Bilibin's illustration to a Russian fairy tale "The Firebird," 1899, from Wikimedia Commons.

The Firebird in Russian Folktales

The firebird is featured in several Russian tales, and famously drawn by renowned Russian illustrator, Ivan Bilibin. As you can see, the firebird has beautiful long tail feathers that are glowing like a fire, and the guy in the picture (Prince Ivan) is grabbing hold of a feather. Of course a feather is not enough, and so the story continues with Ivan trying to capture the whole bird.

In some versions of the story, the reason Ivan was trying to catch the firebird in the first place is because it had been stealing apples from the Tsar's orchard. These are not just any apples, they are special golden apples, so the stakes are quite high in stopping this firebird! Ivan is the youngest son, and his two older brothers had failed so it was his turn to try. The Tsar had promised great reward to whichever son captures the firebird, usually his kingdom and sometimes marriage to a beautiful princess into the bargain.

In any case, Ivan goes through many difficulties to capture the firebird, and usually needs the help of another magical creature to do so. At various times he's warned how to avoid dangers, but foolishly forgets and gets into trouble. Somehow the fact that he's on a quest to capture a firebird seems to get the blame for all his mistakes and misfortunes. He even gets killed by his two jealous brothers on his journey home with the firebird, horse, and princess! Fortunately, though, the firebird tales usually end happily with Ivan being revived and marrying the princess.

In some versions, the firebird willingly gives up a tail feather which not only glows brightly enough to provides enough light for a whole room but also provides magical protection to Ivan against an evil magician.

Apart from the Russian tales, the firebird has also been immortalized in Stravinsky's incredible composition "The Firebird."

Prince Ivan and the Firebird, illustration for Russian Fairy Story, 'The Firebird'

Used on the cover of "Dragon Magazine"

Recordings of Stravinsky's "The Firebird"

"The Firebird" Ballet by Igor Stravinsky

"The Firebird" is a ballet with an original score written by Igor Stravinsky for Sergei Diaghilev's Ballets Russes company in 1910. It combines the traditional Russian tales of the firebird with the unrelated tale of Koschei the Immortal.

The story of the ballet follows Prince Ivan as he enters Koschei's realm, a palace full of magical creatures and objects all under the spell of Koschei. One of these is a firebird, a role always performed by a ballerina. Ivan captures the firebird who agrees to help Ivan escape in exchange for freedom. The ballet includes the "Infernal Dance" of all Koschei's creatures, bewitched by the firebird to dance until they fall asleep. Helped by the firebird, Ivan is able to kill Koschei and leave the palace with all the prisoners freed from the spell, including the princess with whom Ivan has fallen in love.

The original costumes for the ballet were designed by Leon Bakst.

Ballet Costume for "The Firebird"

More Performances of "The Firebird"

The original score for "The Firebird" was commissioned as a Russian ballet, with twentieth century style. Certainly, Stravinksy supplied that! And the original dancer of the Firebird, Tamara Karsavina, created an amazing role and wonderful portrayal.

The Firebird has subsequently been performed around the world, by the amazing Russian ballet companies of course. But also by international companies.

These include Maria Tallchief as the Firebird in George Balanchine's production for the New York City Ballet in 1949, of which only a short piece of film footage exists.

Margot Fonteyn, a real favorite ballerina of mine, also danced this role with the Royal Ballet in 1960. As well as many others, of course. The Russians usually do a great job, with beautiful costumes and sets as well as wonderful dancers - as can be seen in the Mariinsky (Kirov) version featuring Ekaterina Kondaurova as the Firebird and Ilya Kuznetsov as Prince Ivan.

Maria Tallchief as the Firebird

Ekaterina Kondaurova as the Firebird

The Firebird is so beautiful

I was looking at the story of the firebird again just the other day. I love that you included ballet clips as well. I should really go see some dance :) I saw the movie on Pina Bausch last year and loved it to bits.

Yes, firebirds are beautiful. Although I suppose the fire aspect could be a bit dangerous!

The firebird shows up a lot in art. I used some Zazzle images of the firebird to illustrate my lens about my sister's house fire.

Thank you! Yes, they are both special pieces. Maybe I should write about "Swan Lake"!

jptanabe, Throughout my life I've always sought out performances of Stravinsky's "Firebird" and Tchaikovsky's "Swan Lake". With these two pieces in particular I feel that the choreography and the music are absolutely in sync. Both the dance and the music are meant for each other in telling the story. Thank you for enlivening Cyberland.

What a fascinating legend and what a great page!

Thanks for your comment. Yes, many cultures have similar mythologies - fascinating! I have seen Vasnetzov's picture of Baba Yaga, a bit scary but beautiful too.

Firebird belong to more Eastern folklore, in our country which is still heavily influenced by Grimms' Fairy Tales, we have very similar story titled Golden Bird. It seems the symbolism is the same: wealth, immortality, love... Isn't interesting how many different nations share the same tales?
I love the illustration by Bilibin. There is another great artist, slightly older than him: Vasnetzov who you might find interesting. They are both very special.

Thanks. I find the firebird fascinating, and of course beautiful.

The Russian Baba Yaga lives in a cabin built on chicken legs! Is she a scary ... 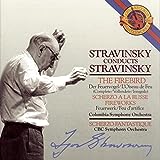 The original horse with wings was Pegasus, a creature in Greek mythology that helped Bellerophon slay the fearsome Chimera.
31%  1   4 jptanabe
Folklore 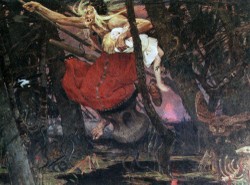 The Russian Baba Yaga lives in a cabin built on chicken legs! Is she a scary witch or a wise old grandmother who can give good advice?
100%  27   16 jptanabe
Greek Mythology