The mythical phoenix - the legendary bird that burns and rises again from the ashes to live anew. What a symbol of hope!

The mythical phoenix bird has captured our imagination from ancient times. It is the most beautiful bird in the world, it brings good fortune, and it lives forever, recreating itself when its body gets old - what more could you want.

The phoenix has featured in mythologies of cultures around the world from ancient times until now. Its most recent appearance is in the "Harry Potter" series, where the phoenix "Fawkes" is heroic in saving Harry's life. It's a good thing to know a phoenix!

The Story of the Phoenix

The mythical phoenix is a glorious, beautiful bird, one of its kind. It lives eternally, going through a never-ending cycle of life and death and rebirth. When the phoenix grows old it builds a special nest. The phoenix then stands in the nest and is consumed by fire. From the ashes the new phoenix is born, rising with the morning sun to spread its glorious new wings and to live another lifetime.

Learn more about the Phoenix

In "Wonder Beasts" Joe Nigg recounts the history of four mythical creatures in different cultures and also includes a number of tales about them, both old and modern. The phoenix is the first of the beasts to be covered and there is a wealth of information, more than is usually to be found about this amazing bird. From the introduction to his chapter on the phoenix we learn that "The fabled phoenix is a crimson, gold, and purple bird with sweeping tail and jeweled eyes. ... Greatest of mythical birds, the phoenix is the triumphant symbol of rebirth and renewal of the human spirit."

The Phoenix in Different Cultures

A well-known mythological creature in many ancient cultures, the phoenix has always been regarded with great awe, as a fabulous bird of good fortune.

The oriental version, known as the Feng huang in China, lives an eternal life without having to go through the cycle of death and rebirth. It just lives forever. 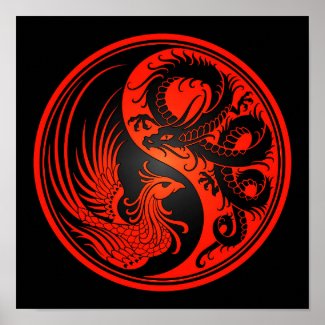 The Phoenix in Art

The idea of the most beautiful bird in the world going up in flames and then rising again in new life is so glorious! Of course artists have produced amazing images inspired by the phoenix. Here are a few that I enjoy - some of them are really on fire!

These first pieces focus more on the beauty of the phoenix itself, rather than its rise from the ashes. And it is a beautiful bird, isn't it?

Here is "Fawkes," the phoenix that saved Harry Potter

The phoenix plays an important role in the "Harry Potter" novels, not only making it into the title of one book ("Harry Potter and the Order of the Phoenix"), but the tears of the phoenix save Harry's life after he has been mortally wounded by the evil basilisk.

The lovable and regal phoenix, brave enough to battle the evil basilisk, is also compassionate and noble.

This amazing Phoenix figurine rises out of the flames, spreading its wings.

Made of resin painted in the colors of fire, it measures 10.25 x 9 inches.

The Phoenix and Us

I love the phoenix and its symbolism. The idea of eternal life is one that has fascinated people in all cultures. The fabulous phoenix achieves this by going through a cycle of death by fire and then rebirth. Obviously human beings don't want to achieve eternal life this way by burning up every so often!

But if the fire is symbolic maybe it represents how we go through trials and difficulties, almost to the point of giving up, only to be brought back to life with new energy and hope. Many a time I've felt that I had to rise from the ashes and go on with renewed life. I just wish I was as beautiful and colorful as this amazing bird! 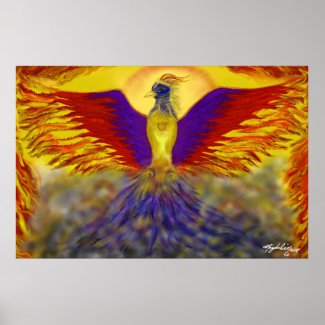 The Mythical Phoenix on Video

Several people have made "artist impression" videos of this magnificent creature. Take a look at them.

More about the Phoenix

Do you love the Phoenix?

There's another way to look at phoenix too - it presents the sun, rising every morning and 'dying' every evening in never ending cycle. The fairy tale about Red Riding Hood can also be read this way. Thank you for astonishing images. They really possess the fire!

The images are spectacular.

Mine too! My husband is the artist in our family.

Veronica is almost certainly better at drawing a phoenix than I would be, for I am useless at art. It is is my weak spot.

Oh I look forward to your phoenix!

What beautiful pictures and yes the phoenix has captured imaginations for centuries.
So much so that I have decided to get my art supplies out tomorrow and draw one. Watch this space. :) 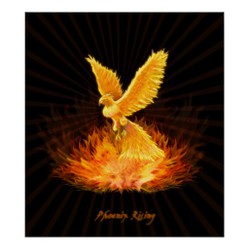 All about the beautiful firebird from Russian folklore, the bird with feathers that glow like fire
100%  13   9 jptanabe
Greek Mythology

The original horse with wings was Pegasus, a creature in Greek mythology that helped Bellerophon slay the fearsome Chimera.
Loading ...
Error!