Which monitors are compatible with a Mac Mini? Pretty much all, but which is the best? Follow me on my journey and discover which was the best monitor for my Mac Mini.

I knew since weeks that the day would come, but it still was a shock as I turned my trusty Mac Mini on yesterday morning and discovered that the monitor was about to die. Strange lines and a sluggishness to wake up had been a problem since weeks, but now it was so dim and dark that I could barely do any writing, let alone doing some work in Photoshop! So it was time for some urgent monitor hunting!

The good message is that despite what some might think, a Mac Mini will work with pretty much every monitor out there, not only an Apple model. Which is great, as Apple's monitors are bit on the expensive side for me ;-)

Before I tell you now for which model I have settled, here what I found on the way ;-) And for those of you that are not sure what a Mac Mini actually is, below a great article by fellow writer pkmcr that explains it nicely:

My Shiny New Monitor - And for a really good price also! Click image to see how much (little!) I paid!

The model I chose after spending hours on Amazon reading reviews and tech-specs is the above. But as I needed a new monitor 'today' I had to go to a real store and couldn't wait for an Amazon delivery ;-(

Thankfully our local store had a 'near twin' in stock, which was not only slightly bigger but also on special, promotional offer! So, in the end I bought an Acer 21.5in wide screen monitor for my Mac Mini that listens to the futuristic name of 'G225HQV', sounds a little bit like something out of Star Wars to me ;-) So far I am happy with it, the set-up was easy and the color and brightness calibration pretty painless. As soon as I have it for a few weeks, I will write up a detailed review of it!

My Mac Mini and my (old) Monitor

First let me say that my old Viewsonic monitor died at the ripe age of 10+ years, so no bad feelings towards that company! And whilst I had it, it did the job perfectly. But over the years my monitor requirements have changed a fair bit and therefore I was looking beyond what Viewsonic has to offer. Here the list of things that were important to me when I was choosing my new Mac Mini monitor:

Cute but too small

I must say, as I saw this little gem on the right for the first time, there was a voice in my mind that started to yell 'Must have, must, must, must!'  ;-) And for sure, it is on my wishlist for the future! The reason being, that one of the best things about my Mac Mini is, that I can take it anywhere in my handbag small backpack. As long as there is some sort of monitor at the end of my journey, my little work horse accompanies me everywhere. Most of my friends are geeky enough to have a spare monitor somewhere, but I also have 'normal' friends that don't. But as I was during this shopping trip after a main-work monitor, I really needed something a bit bigger!

... also not sure about the compability

I obviously had also a look at what Apple has to offer when it comes to Mac Mini compatible monitors. Let me say just this, the prices are too high and to add insult to injury, the newest model they offer is not compatible with most of Apple's computers and laptops! Also I am not sure what my poor little desktop computer would have said when connected to something that has >Thunderbolt< technology ;-) So, as much as I am an Apple fan girl, I was definitively looking for a PC monitor for my Mac Mini!

Choosing a new monitor for a Mac Mini is easy when you know the specs you need and, perhaps more importantly, the ones you don't need. Whilst online monitor shopping is fun and can result in a good deal, seeing the display with your own eyes is also very important. If you are in the same situation, but have a bit more time than I did, I suggest you do some initial research online to see what is on offer, go to your nearest electronic shop and see how the displays look in real life and than order your chosen one online to get the best deal!

It will still take me some time to get used to my new widescreen PC monitor that is now connected to my Mac Mini, but so far I am happy with what I got!

What Would You Have Done?

which monitor would you have bought? 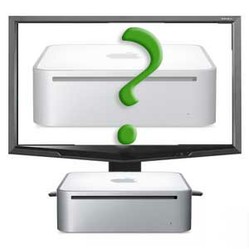 Six weeks ago I was impressed with Steve Job resignation as Apple's SEO, he gave us a simple explanation... but I knew that must be an extreme reason to do it.
70%  8   7 pkmcr
Other Mac Info

There are a number of compelling arguments both for and against making the switch from PC to Mac for us to consider. Are you thinking about switching from a PC to a Mac?
Loading ...
Error!