I used to think that Science Fiction and Fantasy were two entirely different genres. But now I've found a great new book that spans both!

I've been Sci-Fi fan since I was a kid - I read everything I could find in the local library - in fact I think I read every science fiction book they had at the time! I then moved onto Fantasy - I didn't like it as much - but I have got a few fantasy authors that I read from time-to-time.

But I've always thought the two genres were completely separate - until now.

I always find it amusing when people put "science fiction" and "fantasy" books together in the same genre. As a dyed in the wool SF fan, and pretty much bored with Fantasy I'm tired of explaining the difference

To me the vast majority of fantasy writers are lazy - too lazy to create an internally consistent universe - magic just happens and fixes the problem. Science fiction, on the other hand, can have some pretty "magical" technology, but its internally consistent. Ther rules don't just change as the plot requires it.

J.K.Rowling is a stand-out in that regard, probably because it took her so long to find a publisher, she had the entire series of Harry Potter books mapped out, and when the story was finished, she stopped publishing. Sounds so simple doesn't - just doesn't happen with most Fantasy in my experience. I think I saw yet another Dune book in the bookshop today..

Harry Potter - List of Books
A list of all Harry Potter books, including plot summaries and alternative titles. Contains also other, official books that were published and that are part of the world of HP!

So if I'm asked "what are some good science fiction or fantasy books" I tend to answer by asking which the enquirer wants: Sci Fi or Fantasy?

That was until now. Now I have just read one of the best new science fiction fantasy books I've ever read. Its also the only one.: The Galactic Mage - by John Daulton

Two worlds collide: he's a mage and using teleportation to explore his solar system. She's a botanist on a huge earth ship far from home.
Its clever, well written, well constructed, and I'm not the only reader to be hanging out for the next book in the series.

And I don't think it would ever have been published in the old days- you know when you had to have an agent and Publishing House to get in front of readers. Why? Because it breaks the rules. It combines fantasy and SF - that's just not done!

Be warned though, its a gentle story for about half the book. Then the pace suddenly becomes absolutely blistering, and you won't be able to put it down until you're finished. But don't be fooled, otherwise, like me you will end up staying up to 3 in the morning just trying to finish the damme thing!

The thing is that its all entirely believable - the science of the star ships - sure - we've been on top of that since Star Trek was warping around the galaxy. But the magic makes sense as well - I like the bit about how teenage magicians have a tendency to destroy both themselves and their living quarters. And I REALLY want a dragon!

Hmm might have to make some suggestions to the hub! He loves these genres. I balk at them, admittedly, but he has convinced me to read a couple and when the topics is done right and done well, Fantasy can be very impressive.

They live in a nearby cave Pam! I think they do their own hunting ...

That book by John Daulton is on my list to buy. Glad to hear that you liked it. A dragon would be fun, but where would he / she live? And I bet they eat a lot.

I'd love my own dragon - particularly one that comes to my telepathic command - so handy with annoying people!

I agree, I want a dragon who comes and checks up on me now and then and takes me for rides :) 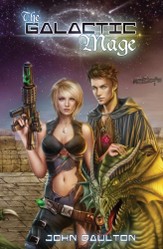 It looked like a straight forward murder case - a prostitute, perhaps killed by her john. It was anything but; and it would have huge ramifications in two cities unlike any other.
58%  4   7 JoHarrington
Science Fiction

It was hard to put down Cory Doctorow's third novel. The sometimes quite surreal world will stay in your mind for a long time afterwards.
Loading ...
Error!