The USAF had done without a GLCM since the retirement of Mace in the early 1970s, but the idea still had its proponents, especially in light of the massive losses of U.S.-supplied aircraft suffered by Israel in the 1972 war. Even more formidable Soviet air defenses awaited NATO aircraft in Europe, and even with new ECM the viability of a theater nuclear force built solely around manned aircraft had to be called into question. The basic Navy Tomahawk SLCM design lent itself well to use as a mobile GLCM, and the BGM-109G paralleled the shipboard nuclear versions in many ways. There were some differences, such as the substitution of the W84 warhead for the SLCM's W80; this was still derived from the B61 bomb, with a maximum yield of 150 kilotons, but with different PAL equipment and other changes. GLCM could also have been fitted with the W70 enhanced radiation warhead, but this was not done. The official name of the Air Force version was changed to Gryphon.

Each GLCM flight was centered around four Transporter-Erector Launchers and two launch control vehicles. In order to provide physical security as well as to avoid a force posture that could be construed as preparations for a first strike, the vehicles would be normally kept in garrison. When engaged in exercises or in times of tension, the flights would be flushed out into the countryside to set up in forward positions, with the launchers and control centers being internetted by fiber optic lines. GLCM security forces, which had to be on guard against protesters in peacetime, would in times of war or crisis would be tasked with countering attempts by Soviet Spetsnaz special forces to locate and take out the Gryphons before they could be used.

Although the GLCM was for all intents and purposes a strategic weapon, capable of ranging far into the eastern USSR, control of the weapons system would be in the hands of Tactical Air Command, not SAC. Deployment of the BGM-109 system to the NATO theater began in late 1983, even as the other U.S. INF component, the Army's Pershing II, also began arriving in Europe. The Tactical Missile Wings that would operate the Gryphon included the 501st TMW from RAF Greenham Common in the UK, the 303rd at Molesworth, England, the 38th TMW at Wuescheim Air Station, West Germany, the 487th at Comiso AS, Italy, and the 485th at Florennes AB, Belgium. Protests against the “cruise” began long before the system was operationally deployed, and the furor over the new missiles was certainly one of the major challenges facing NATO government in the early to mid 1980s.

The signing of the INF Treaty put a premature end to GLCM deployment, with the 486th TMW at Woensdhrecht in the Netherlands not going into operation. On the Soviet side, there were no operational GLCMs, but they did have to dispose of the prototype SS-CX-4 missiles. The withdrawal of GLCMs began in April 1990, when the 38th TMW loaded eight missiles and four TELs aboard a C-5 Galaxy at Hahn Airbase for shipment back to the US for destruction. Elimination of the GLCM system was complete by the spring of 1991, although the W84 warheads have been kept in reserve.

In the 1950s both the United States and the United Kingdom tests hydrogen bom... 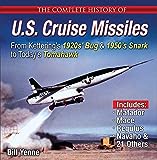 In the 1950s both the United States and the United Kingdom tests hydrogen bombs over islands in the Pacific Ocean, with devastating effects.
Loading ...
Error!