Bhut Jolokia chili pepper or as called Ghost Pepper, is the hottest pepper in the world. The pepper is not only hot, but rich in culture and history.

Bhut, meaning "ghost", is derived from the Bhutias people. The hot pepper most likely got its name because the heat's sneaky effect just as a ghost.

Where is Bhut Jolokia Grown Today?

er is not only grown in India today, but in the Slyhet part of Bagladesh, Nagaland and Manipur.

The climate has a dramatic effect on the heat and therefore the Scoville rating of Bhut Jolokia peppers. A 2005 study comparing percentages of capsaicin and dihydrocapsaicin in Bhut Jolokia peppers grown in more arid climates, such as Tezpur (Assam) and Gwalior (Madhya Pradesh), India, showed that the heat of the pepper is reduced by more than 50% than found in peppers grown in wetter regions.

The Ghost Pepper can also be grown in private gardens around the world where the climate will permit. Seeds can be bought or obtained from the pepper itself.

One plant per pot is the best for these peppers. To avoid having to transplant later, many people use about a 5" planter to start with. The seeds need a hot soil to geminate. Some people even use a heating pad to help their plants reach their full potential before placing outdoors when the weather is warmer. The seeds can take a good while to product visible plants -15 to 35 days. Once the plant rises above the soil, they need plenty of sunlight.

Keep the soil at a moist level at all times. The soil should never be soggy or dry. When starting the seeds, a planting mix with moisture control works great. After placing the plants outside, a small amount of bone meal sprinkled around the base works well. The New Mexico State University - The Chili Pepper Institute - is a great resource for growing peppers.

Bhut Jolokia was not in

troduced to the Western world until 2000. Shortly after its introduction, a report was published stating it's level of heat as nearly double that of a Red Savina Habanero which until then was believed to be the world's hottest pepper.

The official recognition occurred in 2007 when The Guinness Book of World Records certified Bhut Jolokia as the hottest Chili Pepper on earth, which registered 401.5 times hotter than Tabasco sauce! It has been tested by the University of  New Mexico Chili Pepper Institute at an astonishing 1,001,304 Scoville (SHU) heat units.

Hottest Pepper In the World Videos

Other Uses for the Bhut Jolokia

In addition to culinary spice use, the pepper is used in India in homeopathic preparations for stomach problems. It is also considered a remedy for summer heat, probably by inducing perspiration if it is eaten. In north eastern India, the peppers are smeared on fences or included in the making of smoke bombs, as a deterrent to keep wild elephants at bay.

Plans were announced in 2009 by scientists at India's Defence Research and Development Organisation to use the peppers in non-lethal hand grenades, as an alternative way to bring terrorists out from barriers and for use by law officials to control and disperse mobs and rioters. It is also going to be developed as a self defense pepper spray product to be used by potential victims against attackers.

An alternative reason has been suggested for the name Ghost Pepper, it's named thus because the chile is so hot, you give up the ghost when you eat it!

On a cautionary note, be extremely careful when handling or eating this exceptionally hot chile pepper and it's seeds. Never touch the skin or eyes of yourself or anyone else, and always wash the hands thoroughly after handling.

I know this pepper but I don't know that it is the hottest.
Thanks for sharing

Thinking about touching my eyes made me shudder! This sounds like a pepper plant that would do great where I live...although, I'm not so sure that I want it ending up in my dinner! You presented the information really well, I enjoyed reading this.

No way am I going to put the claim of being the hottest pepper to the test! I do think it's clever that the Bhut Jolokia can be used as a natural deterrent too.

Not for me - I'm not into hot chilli peepers. My son complains that I have "taken the spice out of his life" - because I don't eat spices. Fascinating article about the origins and use of Bhut Jolokia Chili Pepper.

Deep-fried puffed water ball is a ubiquitous snack food on par with junk all ... 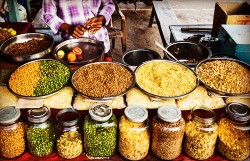 Deep-fried puffed water ball is a ubiquitous snack food on par with junk all over the World. It is sold on wooden handcarts in every nook and corner of Indian bazaars.
Loading ...
Error!