Nearly in May, as UK is forecast snow in the next few days, we took the opportunity of a sunny day to get out and about whilst we can. Biddulph Grange was new to me.

About 40 mins to the South of us, Biddulph Grange stands near the border of Staffordshire and Cheshire, quite close to The Cloud.

Landowner James Bateman developed the gardens at Biddulph Grange, on the Cheshire /Staffordshire border when he bought the house in 1840. He designed it with his friend Edward Cooke and used plants and ideas that he had gathered and had plant hunters and collectors ship plants back to England for him.

The gardens are landscaped in true Victorian style and have several themed areas including Italianate terraces, Egyptian and Chinese themed gardens. The house is privately owned but the gardens are owned by the National Trust who after decades of neglect, brought the gardens back to their Victorian beauty and elegance.

( The original house burned down in the 1890's and was rebuilt but kept the name Grange )
The photos are my own and taken by me.

The house is in private ownership

Bateman was devoutly religious and wanted to believe in the Genesis account of Creation but found this increasingly at odds with the latest fossil and archaeological findings of the time.

Accordingly, in 1862 he opened the Geological Gallery at the entrance to his garden in which he wanted to convince visitors that new geological finds could be linked with the Genesis accounts of creation.

Bateman cemented a collection of fossils in chronological order into the wall in the order that he felt fitted in with the Genesis Creation story and put days above the fossils.  – I have never seen the like of this anywhere before. It was fascinating.

The Cheshire House is a folly in the garden. A folly is an expensive, little building of no practical use in a large park or garden. Many rich men had a folly as an example of their wealth.

Perhaps the most popular and famous part of Biddulph Gardens is the Chinese Garden. It is beautifully presented and tranquil. The decorative dragon parterre is newly restored as it had become faded overtime.

It is a place of beauty and gentleness.

Despite the news of snow forthcoming, we have had some good days recently and the gardens are resplendent this year.

Paths, steps and tunnels lead the way from one themed garden to another. Here in the Egyptian garden two sphinx guard the entrance.

The woodland walks are beautifully set out and there are interesting things to make it more than just a stroll e.g a withy tunnel and stepping stones. It makes it more exciting for small boys !

A withy is a flexible willow branch.

A different clientele..... This is a bug hotel,  different from a bee hotel in that it aims to attract all types of bugs and insects. Note there are no holes for isolate bees. There is a fascinating concern for the environment here just now.

I am a great believer in supporting and visiting what is close by or even at a small distance.  Biddulph Grange is a very secluded NW England visitor attraction. It is worth making the effort to leave the usual tourist trails and spend a day there.

The Cheshire house was very spartan inside as it is a folly, a rich man's folly built purely to show how wealthy they were to be able to waste so much money.

Yes the little man is my pride and joy, my beautiful grandson 4 year old. my descendant. I love him more than I love myself.

Veronica, Thank you for the tour and particularly the pictures of the bug hotel, folly and withy work. What does the inside of Cheshire House look like? Is the intrepid explorer of the stepping stones and the withy work one of your descendants or relatives?

Don't over-rate me, but thanks anyway. There are subjects at which I am not wonderful, for example maths, but my real Achilles heel is my weakness at art, at which I am very poor.

Hello Sheila . TY It is a lovely place to visit.

Frank's a genius; he brightens any discussion. He's the oldest and I think he got all the brains.

Nice photos, Veronica. I enjoyed your article and the discussion with Frank.

BSG
Yes indeed. I was rather intrigued by it too. I had certainly never seen one like this before. It's great idea though. I could imagine his turmoil trying tor reconcile his beliefs with his desire to be scientific.

Regardless of what people's creation beliefs are, I felt it was worth recording on here as a discussion point.

I find the fossil wall interesting, and the attempts to make Genisis match would not be uncommon long ago.

One peculiar fact is that at Cistercian sites there will be no evidence of a mill, as the Cistercians were not allowed to own mills [I know not why] but the Sauvignacs were, and after the merger the Sauvignacs kept their mills as part of the deal.

The previous history of Biddulph Grange must be interesting then.

Some facts about the Cistercians. They are the quintessential silent monks, talking only when necessary. Unlike the Benedictines, who were gardeners,the Cistercians were expert sheep farmers, which is why they had the Granges, which were sheep farms some distance from the parent monastery. Monks would be sent to the Granges, as the abbot decided, but he or the prior would perform visitations to check on them.

Much of upland Britain is ideal sheep territory, so areas like Staffordshire, which consist of low hills, were used as sheep range to support England's immense mediaeval export trade in wool. The trade now has declined, but as man-made fibres decline as they are based on oil, which is running out, wool will come again to the fore, as will other natural fibres.

The Cloud ; Is it a sky phenomenon ? a storage facility for computers? No it'...

After living 7 miles away for most of my life, how come I never knew this mag... 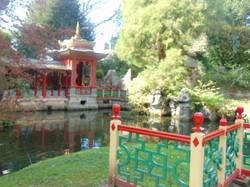 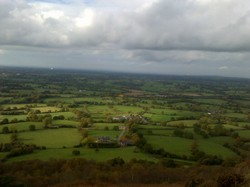 The Cloud ; Is it a sky phenomenon ? a storage facility for computers? No it's a rocky hill on the South Cheshire/ Staffordshire border. I climbed up it yesterday.
67%  15   4 Veronica
Travel & Places 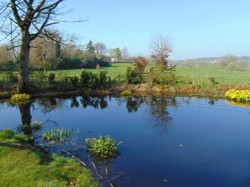 After living 7 miles away for most of my life, how come I never knew this magnificent place existed ? Today's day out was to The Easter Egg Hunt at Hare Hill.
Loading ...
Error!