The 2014 mini-series of full-cast Blake's 7 audio plays from Big Finish comes to a conclusion with Caged, in which Blake comes face to face with the president of the Federation.

Written by Mark Wright and Cavan Scott, the first task for the hour-long adventure was sorting out the cliff hanger at the end of 1.5 Cold Fury. Travis was on the Liberator, Vila had apparently betrayed them and dozens of pursuit ships were zooming in on their position. Travis takes the captured Liberator crew to a secret base near Saturn where Blake gets to meet the Federation’s president. Nothing looks good for Blake, especially as Travis has a special request.

Is Caged any good?

This is one of the most enjoyable adventures in this series. Vila is excellent as Travis’ evil henchman, and a feeling of menace and desperation hangs over the whole story. As the crew squabble among themselves, all looks doom and gloom, and done in a way that draws you into their plight.

It was a shame the torturing and questioning of Avon by Travis couldn’t have been a bit more graphic, but I suppose we have to leave something to our imaginations, as we do with the indignation on the faces of Cally and Jenna at having to wear frocks. There is also some delightful dialogue over dinner between the Federation’s president and Blake.

This brings to an end the current run of full-cast audios, and the six-part mini-series has been well worth listening to. A second series is planned for later in the year.

There are interviews with director Ken Bentley along with the actors. This brings a nice insight into the difficulty of recording out of order and being back together again. The cowriters Mark Wright and Cavan Scott talk about bringing the series to a conclusion.

There is no Blake’s 7 interview this time in the issue of Vortex that comes with the download, as this issue is dedicated to Paul Spragg, the former editor who died suddenly in early May. He was part of the Big Finish family and the tribute shows just how well thought of was this man who died too young.

Recorded at Audio Sorcery and directed by Ken Bentley, the hour-long Caged is available from Big Finish both as a single CD and as a download. Its production code is BFPB7FC007 and its ISBN 978-1-78178-275-0. The music and sound design were by Alistair Lock. The cover art is by Damien May. 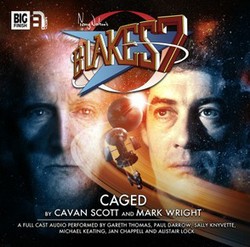 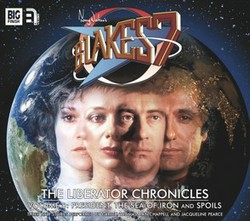