Big Finish is continuing with the format of three separate hour-long stories for the chronicles. Set in the first season, “Velandra” is a combination of Gareth Thomas’ good story-telling voice and a cracking tale. The second adventure – “Retribution” – is more about the relationship between Avon and Vila as Vila realises he’s attracted the attention of a crime baron. And, finally, there is “Ministry of Peace”, a serious story told with snatches of humour as Paul Darrow explains the solving of a puzzle of how an apparently liberated planet was still working for the Federation producing mutoid serum. Something was very wrong.

Gareth Thomas is the main narrator in this story about Blake’s dreams, bad dreams, dreams about a woman from his past called Velandra, and a wolf, and Travis. But Blake isn’t sure if this is a dream or a returning memory from before he had his mind altered by the Federation. Against the advice of the rest of the crew, Blake takes the Liberator looking for Velandra.

As a Blake led story, we get a lot of the politics, keeping the story grounded on what the programme was about. We also see the early tension between Blake and Avon, between conscience and logic. And we see, as happened, Avon going along with Blake despite his misgivings. Driving this play though are the mind games between Travis and Blake.

It is Michael Keating’s turn to take the lead, with help from Paul Darrow, as Avon and Vila pick up an SOS call in Morse Code. The pair teleport down to the inhospitable moon where they find a crashed ship and a survivor – Ragnus Lang, one of Vila’s former partners in crime. His planet was in rebellion against the Federation, but the Federation were fighting back and he needed Blake’s help to free the planet’s leader who was held captive. But Lang is not all he seems.

Vila and Avon always worked well together in the original series and this adventure adds to that with good dialogue between the two. Lang, sadly, is a little bit too much of a stereotype criminal to be believable but that is a minor grievance as it is the interaction between the two crew members that makes the story.

“Ministry of Peace” by Una McCormack

Servalan is not happy that the planet Speranza has fallen to the rebels and, against Avon’s better judgement, Blake decides to help the new rebel government. Told by Jacqueline Pearce and, mostly, Paul Darrow, the story relates how the Liberator crew arrive at a world on the brink of civil war. The most urgent problem is finding out why some senior figures do not want to execute a former war criminal, and Blake takes on the job.

This tale explores one problem that revolutionaries often face of how to replace a corrupt and evil government without bringing in something almost or just as bad. There are always people ready to look for their advantage in a situation of change, and these are the very people who are not too happy about Avon and Blake sticking in their noses. This is a nicely woven story exposing the underbelly of rebellion; it is dark, but all the better for it.

Volume ten of the Liberator Chronicles (ISBN: 978-1-78178-310-8) comprises three plays directed by Ken Bentley and Lisa Bowerman. Martin Montague was responsible for the sound design and Jamie Robertson for the music. Cover art was by Grant Kempster. Justin Richards was the script editor and the executive producers were Jason Haigh-Ellery and Nicholas Briggs. The download also comes with a copy of issue 69 of Vortex magazine, which includes an interview with Cavan Scott about the new series of Blake’s 7 audio adventures. There is also a preview of the new Blake’s 7 novel Criminal Intent and a look back at the Blake’s 7 audio adventure Warship. 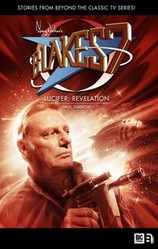