A review of the Martha's Vineyard murder mystery written by Philip R. Craig.

Synopsis: Retired Boston police officer Jefferson Jackson should be enjoying retirement in Martha's Vineyard, focusing on fishing and his new girlfriend, Zee. However, when the fishing boat, the Nellie Grey, mysteriously explodes, killing one of the passengers and seriously injuring the son of one of his best friends, Jeff is asked to find out the cause. This requires him to investigate Martha's Vineyard's seedier side as he looks for a drug dealer that might have ordered a hit on a former customer.

I picked out this book pretty much at random the last time I was at our local library, mostly because the two books I had intended on checking out weren't on the shelf. There were groceries in my car, putting me on a bit of a time crunch, and I didn't really have time to look around for another preferred choice.

I finally finished reading the book last night and, while I didn't completely hate it, I also discovered it just wasn't my cup of tea.

One of my biggest concerns when I started reading this book was I was afraid it would be more of an advertisement for Martha's Vineyard than an actual mystery. And, when I started reading it, I honestly thought my concerns would be justified because the author does spend a great deal of time reminding the reader just how beautiful of an area that is. Then, when Jeff started dating Zee, I couldn't help but notice an awful lot of the book focused on that (and how their romance was blossoming by living in a place like Martha's Vineyard) instead of the mystery.

Ultimately, I think a lot my problem with this book was the mystery itself wasn't anything that I found overly interesting. Murder mysteries pretty much come down to one thing, motive. The best mysteries keep the motive a secret because, once that is figured out, it's not too hard to find the killer. This book reveals the motive in the third chapter.

Sure, it was only a potential motive based on hysterical suspicions from one of the victim's sister. But, as the book progressed and we were even given the last name of the potential drug dealer, all attempts to convince me it was just a theory really were a waste of time. In fact, I think a large part of the reason why the author was able to spend so much time on Jeff and Zee's relationship was  because his detective didn't have that much detective work to do.

Another problem I found I had with this book was the way everyone, including local law enforcement and potential drug dealers, seemed to be perfectly cooperative with Jeff's investigation, something that made it even easier for him to solve an already relatively simple mystery. Had he been a modern-day Hercule Poirot with a long history of solving murders before retiring as a police officer, I might have been able to believe this. But, he himself said he never even made detective.

At minimum, he should have met much more resistance and been made to prove himself first. And, unfortunately, with all the help he received, including being practically spoon-fed information from a news reporter, his solving this murder seemed almost tainted.

As I said before, I didn't completely hate the book, mostly because the characters were somewhat likeable. However, I thought the hero's first murder investigation was a little too easy and, as a result, I didn't enjoy the book as much as I hoped I would.

StevenHelmer, Thank you for product lines, pretty pictures and practical information.
Have you seen the film version of the book? Early last week I saw it, because the library system here has it. Perhaps versions of other books within the series will be filmed since A Beautiful Place to Die just came out in 2020. 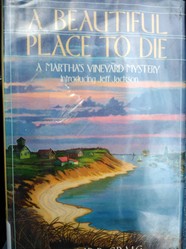 A review of the 1934 mystery novel written by Agatha Christie.
50%  1   7 StevenHelmer
Mystery

A review of the 1933 mystery novel written by Agatha Chrisite
Loading ...
Error!