I purchased this for breakfast this past weekend. Read to find out what I thought of it.

Product Description: Frozen breakfast pizza from the Luige's brand offering eggs, cheese, ham, peppers and a garlic sauce on a fresh dough crust. I purchased this product from one of our local grocery stores this past weekend for $6.99 and prepared it using our pizza oven as a Sunday morning breakfast option for my wife and me.

Our new washer and dryer set was being delivered on Saturday morning and, since I knew it was going to be hectic, I decided to pick up this food item while grocery shopping the night before. It wasn't the first time I have had this item and, as always, I thought it was a good choice.

Our grocery stores have multiple breakfast pizza options, including a couple that were less expensive than this brand. However, despite the higher cost, this is easily one of my favorites.

One of the main reasons for this is the crust. Most breakfast pizzas tend to have thin crust, which I've never been a huge fan of. This crust is thicker and, while it does take a bit longer to cook using our pizza oven, does add a little something extra. If nothing else, it makes the pizza a lot more filling and, as a result of that, I usually have a couple slices leftover for later (this almost never happens with the thin crust versions).

This pizza also has quite a few toppings on it compared to many of the other brands. It could probably have a bit more cheese, but the eggs, peppers and ham are all of decent quantities. This both adds to the overall flavor and, much like the crust, makes the pizza much more filling.

As I mentioned, the thicker crust does mean a longer cooking time for this pizza when using a pizza oven, so it is important to plan for that when preparing it. But it is also worth the longer wait when you do have a chance to eat it, so that balances out.

This is a brand that is more expensive than some of the other choices that might be in your store's freezer section. However, it is also a brand that is worth spending a couple extra dollars on because you will get your money's worth. I do recommend trying it.

StevenHelmer, Thank you for the practicalities and product.
I respect your and your wife's analyses so this is on the grocery list for weekend shopping that'll take advantage of triple fuel points.
What would you all recommend serving around it in the way of cooler and warmer drinks? Would it go particularly well with a particular kind of breakfast coffee or tea? 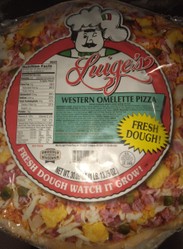 I purchased these pizzas and had them for lunch and dinner over the weekend. Were they worth my money?
50%  1   7 StevenHelmer
Other Food & Cooking