I purchased this pizza last night as an easy meal for my daughters. Read to find out if it was worth my money.

Product Description: Frozen cheese pizza from the Tony’s brand advertising “real” cheese and sauce made from “real” tomatoes. I purchased one of these last night at our local Piggly Wiggly grocery store for $2 and cooked it on our pizza oven as a last-minute meal choice for my daughters so I could get them in bed at a reasonable hour following their figure skating lessons.

I Bought This Because I Was in a Hurry 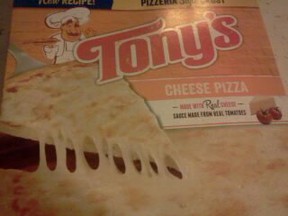 I honestly wasn’t really planning on buying pizza yesterday. However, I desperately need to find time to do some real grocery shopping and, since we didn’t have anything else that would make an easy dinner following my daughters’ skating lessons, I figured it was as good of a choice, at least for them, as any.

My decision to purchase the Tony’s brand was really a decision based solely on convenience. I had my youngest daughter with me (her older sister’s lesson ran longer so my wife and I took separate cars) and, as we entered the store, she told me she had to go the bathroom. Since I couldn’t go in with her and didn’t like the idea of her going in the public restroom by herself, this meant we had to rush through the store so I could get her home quickly. The Tony’s brand was in a display close to the door. The fact it happened to be on sale for just $2 was just an added perk. But, as it turns out, it ended up being a good purchase too.

I made this as soon as I got home and had it out of our oven and ready to be served by the time my wife got home with my other daughter.  While not overly big (something that was pretty much to be expected given the low price), the pizza was enough for the two of them.

What really surprised me about this pizza was the quantity of cheese on it. Since it was a cheaper brand, I figured it, like most bargain pizzas, would skimp on the cheese. However, there was actually quite a bit of cheese on this. In fact, this brand probably had more cheese than many, much more expensive brands.

Another thing I found I liked about this pizza was the crust. I was able to try part of a slice of this and the crust was crispy without being paper-thin (something I’m not a huge fan of) and had a good taste to it. Actually, to be more accurate, the entire pizza tasted pretty decent.

My oldest daughter did have one complaint about this particular pizza though. According to her, there was too much cheese and not enough sauce. This actually surprised me because she normally prefers it if a pizza doesn’t have much sauce on it. But, apparently, she liked the sauce on this particular brand enough where that was actually a disadvantage this time around. So, even in that regard, I think it was a compliment. 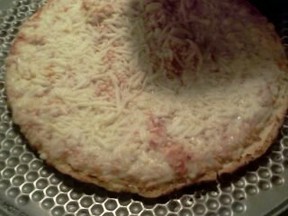 As I said before, I grabbed this pizza almost out of desperation and, despite the low price, might not have purchased it if we weren’t in such a rush. However, after our experience last night, I do think it is a brand I will be purchasing more often.

StevenHelmer, Thank you for practical informations, pretty product picture and product line.
Did you intend not to leave a letter grade or was there a computer glitch that didn't record your final score? Do you venture below C or just leave no score if the grade plummets to D or worse?