In 1947, after a drinking session at a bar in East Fortieth Street, New York, writer John Steinbeck and photographer Robert Capa decided to visit Russia.

Both Steinbeck and Capa were at a loose end. A casual conversation with the affable barman, Willy, turned into a serious commitment to visit the enigma that was Russia. Some friends predicted internment and death for the two reckless adventurers, whilst less charitable critics wondered just how ‘Red’ Capa and Steinbeck were in reality. The outcome of their journey was the book A Russian Journal with text by Steinbeck and photographs by Capa.

Against the Odds - Steinbeck and Capa Set Out for Russia

Both Steinbeck and Capa were fully aware of the anxiety as well as the hostility and suspicion that their journey was bound to arouse in some quarters.

It was the height of the Cold War, Steinbeck was already dismissed as a Communist by many after publishing The Grapes of Wrath, whilst Capa’s photographic work during the Spanish Civil War was often regarded with equal suspicion. 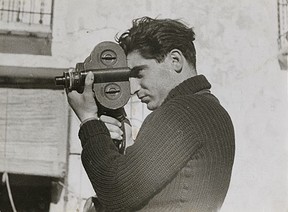 But their minds were made up.

The whole purpose of their forty-day trip was to meet ordinary Russians and to overcome the suspicions their journey had provoked by writing about and photographing the Russian people.

Whether at work in factories and fields, enjoying their social and cultural lives, interacting in their domestic environments, grieving for their war dead – in fact, experiencing everything that ordinary people the world over endured and enjoyed – the point was to emphasise the similarities, not the differences between people.

A Land of Surprises

The diversity of the people and the landscape came as a surprise to Steinbeck and Capa. Georgia was a tropical paradise, their people handsome and strong. Whilst the citizens of Moscow, so close to the bureaucratic centre, were unsmiling and tense, the people of the Ukraine were laughing and relaxed. And always the women in each area are assessed by our two gallants for their beauty and strength.

The most beautiful girl they saw in Russia was a wild, feral creature living in the bombed-out cellars of Stalingrad, a mental casualty of war, only coming out of her lair to beg for food. Unfortunately the Russian censors would not allow Capa to take his photographs of her out of the country.

In A Russian Journal Steinbeck gives an affectionate, dry-humoured character analysis of Robert Capa. We see Capa as he wrestles with the artistic process, steals books from other people’s hotel rooms and is never satisfied with his work or his hair, spending hours in the bath – and both Capa and Steinbeck stealing other men’s whisky.

Reading these little vignettes of the great photographer is very moving because Capa was killed in 1954 by a landmine in Indochina.

but the book gets published...

That terrible injustices were taking place in Russia at this time cannot be denied.  According to Susan Shillinglaw in the Introduction to A Russian Journal (1), KGB files reveal that Steinbeck and Capa’s travels were stage-managed throughout. Steinbeck and Capa realised this. Even as Capa photographed Moscow street scenes from their room at the Savoy, they realised they themselves were being photographed from the building opposite.

A Russian Journal - A Unique Document

A portrait of the Russian people

A Russian Journal is unique – at a time when people in the West feared the Russians, Capa and Steinbeck offered a humane perspective showing how Russian people, like their American counterparts, wanted a peaceful world in which to live their lives. Capa and Steinbeck portrayed Russia in as objective a way as was possible, with humanity and tenderness.

Let Capa have the last word on what they hoped to achieve:

“It seemed to us that behind phrases like ‘Iron Curtain’, ‘cold war’….people and thought and humor had fully disappeared. We decided to make an old-fashioned Don Qixote and Sancho Panza quest – to ride behind the ‘iron curtain’ and pit our lances and pens against the windmills of today.” (Susan Shillinglaw ibid.)

Vintage Travel Poster - See The Soviet Union in the Making

Whether a native Russian or an interested Anglophile, London is home to a number of organisations catering for those who are fascinated by Russian culture.
30%  0   4 KathleenDuffy
Modern History