A review of the non-fiction novel written by Buckner F. Melton Jr.

Synopsis: In the early 19th century, disgraced former vice president Aaron Burr sought to take advantage of civil unrest in the western part of the fledgling United States by forming an army, conquering land and forming his own country. He was eventually accused and stood trial for treason. This non-fiction book examines the conspiracy and the players that were involved.

In a continuing effort to change things up when reading, I decided to visit the non-fiction section during my last trip to our local library and, for the first time since college (at least as far as I can remember), picked out a book about history.

To tell you the truth, I had no real interest in this particular subject when I first picked out the book. My history major in college was geared more toward European and religious history so my knowledge of Aaron Burr really was limited to that old "Got Milk" commercial that used to be on TV. And, quite frankly, I wasn't even sure if I would be able to read this book without getting bored and giving up a few pages in. However, as it turns out, it was actually a much more interesting read than I was expecting.

I think the thing that really impressed me about this book was the way the author didn't just focus on the facts and, instead, made a great deal of effort to make it feel as though I was there witnessing the events in Burr's life, from his political rise, to his duel with Alexander Hamilton and his trial for treason.

I especially appreciated how the book took the time to explain little details about the time period that really put the big picture in perspective. This included explaining just how long it took for information to travel from one part of the country to another (which Melton put in modern-day perspective by comparing it to communicating with Mars in modern times) and the difficulties our relatively newly formed government had when it actually came to convicting its former vice president of treason. There was quite a bit more information packed into this book than I really was expecting and it definitely went far and beyond what most people know about the early days of our country.

My only real complaint about the book is I wish the author would have delved a bit more into Thomas Jefferson and his role in the conspiracy. The way he described Jefferson's lack of action despite numerous warnings about Burr really made me wonder if the former founding father and author of the Declaration of Independence was secretly involved with Burr's plot and only took action when he had no other choice. It was either that or he was more incompetent than the history books remember him and, either way, it would have been interesting to see proof of which it was.

I had some doubts when I decided to read this, but I wound up enjoying it a lot more than I expected. If you like history, it's a book worth reading.

StevenHelmer, Thank you for the practicalities and product.
Somehow this book didn't catch my attention even though the Burr family interests me.
Do you know that Aaron Burr's daughter was best friends with Washington Irving (April 3, 1783-Nov. 28, 1859) and Meriwether Lewis (Aug. 18, 1774-Oct. 11, 1809)? President Jefferson's actions also look a bit odd in regard to the latter.
Theodosia (June 21, 1783-Jan. 2/3?, 1813) married Joseph Alston (1779-Sept. 10, 1816), subsequently 44th governor South Carolina, in 1801 and vanished 12 years later.
Perhaps it would be considered "chick literature" but mayhaps your library would have Anya Seton's My Theodosia.
Thank you for the excellent review, and I'll be getting my copy. 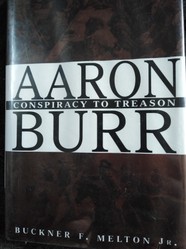