Chester's Back! by Mélanie Watt enchants children and grown-ups of all ages, beyond the targeted 4- to 8-year-old reading audience, with Chester's cave cat, magician and star acts.

An unknown from the unfamiliar backwater community of Chesterville accomplishes the unimaginable when a renowned publisher based in the world-important North American province of Ontario and state of New York unexpectedly is swamped with fan mail.

The publishing company consents to publication deals since Chester has real-time, true-life fans.

Chester the cat takes credit for inventing the wheel:

Interestingly, the New World can claim an independently invented wheel via wheel-like worked stones on kids' toys devised by the Olmecs (1500 BCE to about 400 BCE).

Do cats dream of the good old days?

But Chester dislikes finding creativity channeled or constricted by publisher and reader expectations of tried and true characters, dialogues, and events. He escapes from fairytale expectations of long ago stories in faraway places through the persona of the ancient feline inventor of:

He nevertheless finds impatient inventiveness on the part of his butler, Country Mouse, who introduces a dinosaur with bad breath from not alternating breath mint-chewing with cave cat-devouring.

Chester gets back as the Great Chesterdini. He hacks fairytale artworks in half. He is bested by:

Chester the cat luxuriates in such symbols of elegance as long white limousines.

Has a cat a chance in dog-eat-dog lifestyles?

Chester juxtaposes a dust storm, a quartet of Old Southwest ghost-town buildings, and a super-prickly cactus to visibly mended fairytale artwork. The piglet knows when to abandon creativity clashes which lead to:

Chester lets it be known that he answers to the title Sir Chester and that Country Mouse must keep busy but not so industrious as to respond other than immediately to the butler’s bell.

Fulfillment of all of his demands makes Chester so over-confident as to miss the mark on ridiculous outfits to wear to fancy theaters. Eyewitnesses notify newspapers worldwide of Chester’s silly star-collared jumpsuit sporting a tail bell.

Chester's Back! by Mélanie Watt ~ available via Amazon

In this uproarious sequel to Chester, the battle of the picture-book makers continues. Which author-illustrator will come out on top -- Chester or Mélanie Watt -- is anybody's guess!

Is a cat funnier in books or life?

Readers operate under clouds of delusion if they contemplate the end to Chester’s star author career. Cats justifiably pride themselves on forgiving humans when people err. Chester gently questions who will win the 500 gazillion red jellybean reward as his picture book co-creator.

Chester's Back! therefore regales children and grown-ups of all ages -- beyond the target audience of pre-schoolers to third-graders aged 4 to 8 years -- with culturally enriching, educationally entertaining adventures amid such domesticated animals as cats, dogs, and mice, thanks to:

Uploaded to YouTube on November 23, 2011 by Philip Kuckyt ~ URL: https://www.youtube.com/watch?v=zzCBFtpq3y4

Sources Consulted: Chester's Back! Sells in English and French Formats

Chester by Mélanie Watt delights readers of all ages, beyond the target audie...

American Curl cats are so named because their ears curl ear-resistibly backwa... 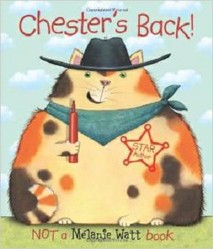 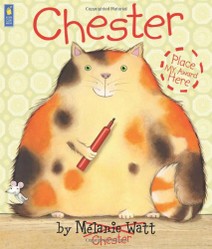 Chester by Mélanie Watt delights readers of all ages, beyond the target audience of 4 to 8 years, with a country mouse’s picture book story being taken over by a strong-minded cat.
100%  13   9 DerdriuMarriner
Cat Breeds